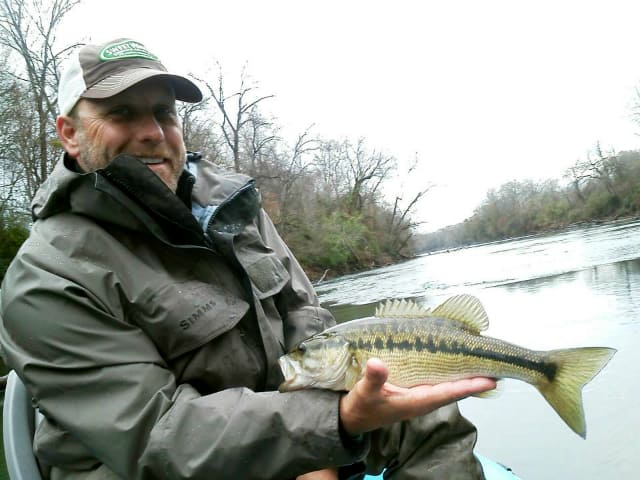 Cohutta Fishing Company began life in fall 2009 high on aspirations… a little short on ceiling space. For three years operations were dwarfed inside an 8-foot high, 1,400 square-foot box—which made selling 9-foot fly rods tough. The shop has since relocated, ballooning its square footage, expanding inventory with stocked shelves of top gear, and planting roots in the historic district of downtown Cartersville, about an hour north of Atlanta.

Shop owner Andy Bowen says the transition has lead to diversification, catering to eclectic Atlanta fishing opportunities—from coast to hinterlands and beyond.

“Our slogan is ‘For the diversified angler,’ which means being adept at everything from brookie flies to tarpon rigging systems,” Bowen says. “The cool thing about our location is how many species you can catch in a short distance, including shoal bass indigenous to the Chattahoochee and Flint rivers here in Georgia.”

Shop home-waters include the Etowah, Coosa, and Oostanaula rivers for warmwater staples. Cohutta also guides wade trips for trout and floats during summer months for striped and spotted bass. Lake Allatoona is a 10-minute drive for hybrids and stripers. Native brookies dot them thar hills. Trout and stripers crowd local tailwaters. And redfish tail the in-shore flats of the Georgia coast, also within striking distance.

That lineup of fish, of course, would not be complete without largemouth—the reigning king of the bass-happy south. Bowen says the crankbait boom—and a successful crusade to convert those fishermen into fly fishermen—has been good for business.

On a weekly basis Fridays come fast and caffeinated, with a pot of steaming brew followed by chief decisions over Widespread Panic vs. Allman Brothers, Waylon Jennings, or the Black Keys on Pandora. Fishermen gather, craft lies, gear up for the weekend, and then comes the hops hatch.

“Our claim to fame is we’re the only Sweetwater Brewing Company endorsed fly shop in the country,” Bowen says. “So the 420 Pale Ale or the LowRyder IPA normally starts flowing a little earlier on Fridays.”