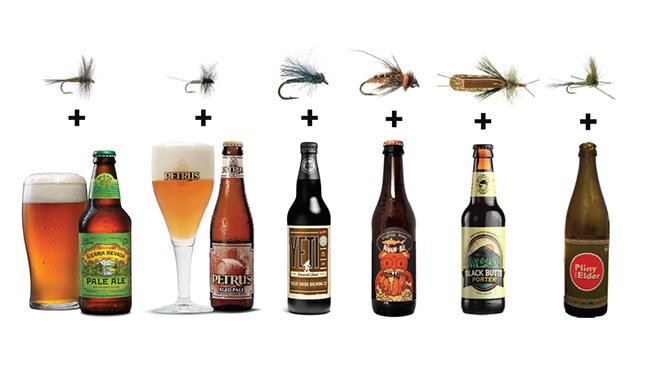 WHEN MY PARENTS SHIPPED my sister and me off to college, they didn’t expected to receive a craft brewer and a flyfishing writer in return. But we’d both seen enough of corporate America to realize that a lifetime spent living in it might not be worth the paycheck. A collaborative effort between the two worlds was inevitable, and after much deliberation our musings have molted. A bottle of Bud and a can of worms may have laid the foundation for pairing beer with bugs, but these are our contemporary favorites.

The blue wing olive (or BWO if you’re into the whole brevity thing) is a staple hatch for flyfishermen. Like chicken nuggets at the school cafeteria, BWOs hatch throughout the year, across the country, in a dependable and fairly consistent fashion. It’s fitting then, that the beer they’re paired with displays a similar popularity and consistency. One knock against smaller craft breweries is their inability to ensure a perfect batch every time. Larger craft breweries, like Sierra Nevada, have the resources to perfectly replicate their recipes time after time. Like the blue wing olive, Sierra Nevada Pale Ale is a well balanced beer that can be found almost anywhere, and enjoyed in exactly the same manner you last remembered it.

At 6% ABV (alcohol by volume), this pale won’t slow you down, and can be swilled throughout the day; a good thing considering a prolific BWO hatch can last an entire morning. The BWO comprises a good portion of a trout’s diet, and is a reliable go-to for the prospecting angler. Sometimes it’s best not to overthink things-just grab what you know works. Tie on a Parachute Adams and reach for a Sierra Nevada Pale Ale–the noses are on their way.

Tricos have been called the “whitewinged curse” because of their miniscule size and the finicky nature they induce in trout. To catch fish during a trico hatch, an angler must be precise, using imitations as small as a size 24. Enter Brouwerij Bavik’s Petrus Aged Pale. Locating this beer can be about as challenging as spotting tricos (if you hadn’t guessed by the name). It comes from Belgium and is aged in oak barrels for more than 20 months, which helps this beer deliver its tart, sour, acidic punch.

When a trico hatch is in full swing, it puts fish in a frenzy, giving anglers a case of the shakes. The 7.3% ABV in this ale is a handy sedative when trying to thread that size-24 hook, and it helped the Petrus take home the World’s Best Specialty Pale Ale award at the 2011 World Beer Awards. Petrus is colored a yellowish gold, with a bright white head that dissolves after a minute or so, leaving a lacey ring. Trout looking up at a blanket spinner-fall of tricos may find it similarly enticing.

Winter flyfishing is a great way to show how big your cajones are, while shrinking them at the same time. Anyone who’s participated in this masochistic game likely has the midge to thank for it. Tiny, dark, and slow moving, the midge is the only winter hatch an angler can depend on. Most would argue a nip of whiskey is the best medicine on a February morn, but at 9.5% ABV, you could probably drink Yeti warm from a flask.

It all begins with a roasty malt flavor, followed by hints of caramel and toffee that are complemented by a generous helping of American hops. Like the midge, this beer is available year round and has a large distribution. Catching giant tailwater trout on tiny midge imitations during a winter snowstorm is the stuff of legend. So too, has the Yeti Imperial Stout made a name for itself, taking home three medals at the Great American Beer Festival, and being ranked number 36 on BeerAdvocate’s 2010 “Top 100 Beers On Planet Earth.” When you’ve got to dress like a Yeti just to survive a day on the river, you may as well be drinking one, too.

West coasters call it the October Caddis. East coasters proclaim it the Great Autumn Brown Sedge. Other aliases include fall caddis, giant caddis, and Tommy Two- Guns. Regardless of longitudinal affiliation or nomenclature, all of these insects are nearly identical in appearance, behavior, and timing. The October Caddis appears when the leaves begin to change, ushering in fall with a color similar to that of a ripened pumpkin. Dogfish Head Brewing has unwittingly doctored the perfect pairing with its creation of Punkin Ale, a delicious seasonal that can be found from coast to coast.

Named “Punkin” in tribute to the great American pastime of “Punkin-Chunkin” (pumpkin hurling), this fall seasonal is actually brewed with real pumpkin meat. A hearty hatch requiring a #8 dry fly requires a meaty libation; something this full-bodied brown ale delivers. Punkin Ale relies on 7% ABV to get the lifeblood flowing, and uses just the right amount of spices and brown sugar to create a beer that’s flavorful yet distinctly Dogfish. An orange-gold body and lemon-yellow head are strikingly similar to the large adult caddis flies, which can trigger aggressive behavior by some large fish.

Aside from the convenient location of the brewery, Deschutes’ Black Butte Porter (5.2% ABV) is as big and bold as the salmonfly itself. The beer’s namesake “Black Butte” was taken from a 3,000-foot cinder cone (once an active volcano) that rises from a rock landscape just north of Sisters, Oregon. The salmonfly, at 2.5 to 3 inches in length, is a similarly large presence in river systems across the West, with the nymphs often making up the largest non-fish biomass in a river.

Slight hop bitterness is followed with a smooth chocolate finish, earning this porter a bronze at the 2009 Great American Beer Festival. Salmonflies prefer to hatch in the lower, warmer stretches of a river before moving upstream. The large adults often prompt the biggest fish in a river to rise and gorge until the point of regurgitation. As a result of this fast-paced, buffet-style feeding frenzy, the bite doesn’t last long, giving anglers only a short window to catch fish. In the same manner, this slow drinking porter is not a session beer. It’s best enjoyed only slightly chilled, and will require some effort on the angler’s part to put away an entire six-pack.

It wouldn’t be a beer list without an IPA, and in this case a DIPA. Anything less than a double would be too small when discussing a mayfly as monstrous and utterly delicious as the Green Drake. Whether you’re fishing the Eastern or Western variety, the Green Drake hatch is one of the year’s most anticipated events. So too is Russian River’s Pliny hatch, which has a shelf life shorter than AR-15 ammo during the Obama administration. If you do hit the Green Drake hatch with a bottle or two of this DIPA, rest assured you’ve successfully aligned the moons and shifted the tides.

The Green Drake’s notoriety is undeniable in the flyfishing community. Mere mention of the hatch sends hoards of dry-fly anglers to the waters edge. Similarly, peruse any “best of” beer list and you’ll find Pliny has developed an equally outstanding reputation. This well-balanced, smooth-drinking beer relies on a slight hop bitterness and a citrus pine aroma to deliver 8% ABV straight to the dome. Warning, a sense of euphoria and purpose may be induced while casting giant mayflies under the influence of Pliny the Elder.