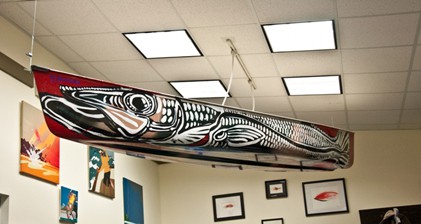 Long before Occupy Wall Street spawned from the gritty sidewalk cracks of Manhattan, back in the spring of 2009 when the U.S. economy capped its worst performance in 51 years, the sentiment around town—at least for those working in finance—was less about occupying anything and more about evacuating everything.

And what better place to evacuate to than the Florida Keys—especially if you were someone with a serious hankering for saltwater fishing. In April 2009, former New Yorker Nathaniel Linville opened The Angling Company in Key West, Florida, a new business with fresh ideas in a time of massive economic overhaul. And so far the venture has paid off.

Linville spent his youth fishing the Northeast from Connecticut to the Catskills. He lived in Brooklyn during his 20s and at the time, “wanted to at least make an effort to live in a place that had more available fishing than NYC, which has great fishing, but only for a few months out of the year,” he says.

So Linville stuffed his apartment into a couple of suitcases and headed southbound in search of the storied Keys fishing he’d always been intrigued by.

“Key West offers a constant availability of really good fishing opportunities,” Linville says. “There’s no time of year down here when the fishing is crappy. You can obviously have bad days, but there’s no one time of year when you could say the fishery is dead.”

With a year-round fishery at his fingertips, Linville has set out to distinguish The Angling Company as a flyshop of note in an ocean of competition.

“We are a flyshop first and foremost, and that is our ‘angle,’” he says.

“I think it’s important for me as a shop owner to not be a guide. It helps keep the shop neutral and in full support of the fishery, the guide community, and the clients… in that order. In fact that is our mission statement: To support the fishery first and the guide community in close second,” Linville says.

Being a flyshop first and foremost, The Angling Company caters to flyfishers—ones seeking quality and timely information on a fishery that requires practice, patience, and specialized equipment built to tackle the myriad species that call the Keys home: from bonefish, tarpon, and permit to tuna, shark, cobia, and kingfish. And the equipment evolution in this realm has been revolutionary.

“It used to be that a 12-wt was the ultimate tarpon rod, and you needed a 10-wt for permit and an 8-wt for bonefish. That has changed,” Linville says. “What was a 10-wt in 1954 is an 8-wt nowadays. The reels have gotten lighter. The arbors have gotten bigger. And when you fish equipment that’s well-made, well-designed, and well-rigged, it makes a huge difference in the experience of catching fish.” 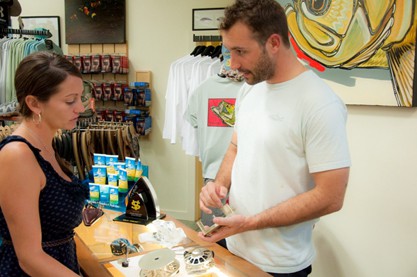 In addition to carrying brands such as Tibor, Nautilus, Abel, Hardy, G.Loomis, Sage, Ross, and Scott, to name a few, Linville also spends significant time focused on differentiating his own brand—The Angling Company—from the status quo.

“When you walk in many flyshops,” he says, “there’s a very traditional esthetic, you know it when you see it. It’s the dark greens, something with a fly on the logo, a lot of dark wood tones, and signs hanging everywhere,” he says. 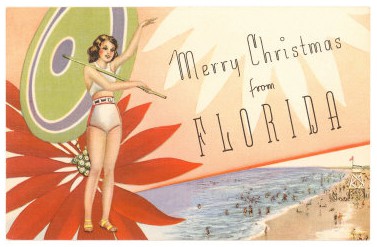 “That has always bothered me, because a flyshop in my mind should be a place where people feel happy and uplifted as opposed to being in the same old flyshop they’ve been in a million times.”

Kicking off the crust, Linville has incorporated bright shop colors, contemporary designs, and clean, modern architecture for a shop with an up-tempo verve. And one that means business. Tarpon business. For instance, Linville recently installed a rock climbing hang-board to encourage forearm strength-training for the upcoming season.

There are also plans for beer kegs that will greet anglers when they disembark the tarpon bus. Just in case the pain from catching big fish needs a little extra easing.