A Difference in the Balance 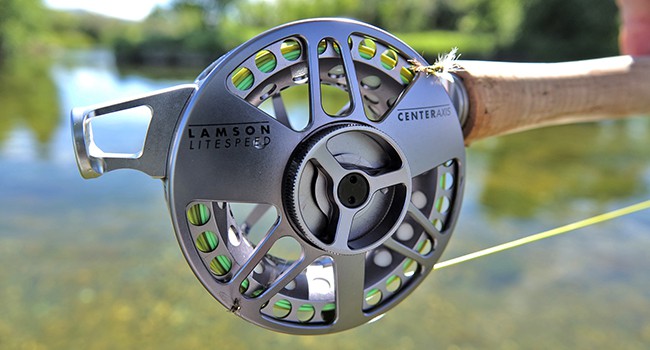 Feelings are part of it. That’s because our cherished fly rods, whether impatient laser throwers or deep-bending noodles, stroke emotions. When they feel right, we’re remarkable anglers. When something’s jacked, it’s a slippery slope from elitist to self-defeatist. Idaho-based Waterworks Lamson, with its new Center Axis Rod/Reel, is banking on recalibrating the way we feel about fly rods in general with a better-balanced tool.

Center Axis technology, in short, melds graphite fly rod with Lamson’s best-selling Lightspeed reel. The reel, instead of being “footed” on a traditional reel seat, actually forms the reel seat, resting closer to your casting hand and inline with the rod’s center axis.

The concept isn’t new. About 20 years ago, Sage and the C1 Design Group brought a similar physics experiment to market. In 1998, C1 acquired Lamson from Sage. Mark Farris was on the original design team. And he’s here now, once again going to bat for the “pretty obvious ergonomic benefits of raising the reel to eliminate the pendulum lump swinging around several inches off center from the rod’s axis.”

Pendulum lump? Sounds like the kind of doctor’s diagnosis you might want to sit down for. In fly casting, however, it can be understood as an inefficiency. “If you’re sensing the reel, or input from the mass of the reel,” Farris explains, “it’s harder to feel what’s going on with the line. The essential focus of the Center Axis is to allow you to feel the line as cleanly as possible.”

That sensitivity is optimized by taking the weight of the reel out of play. Imagine unscrewing your line-winder and stashing it in your pocket, casting the rod and line only. The sensation, Farris says, is something akin to quietness. “The pendulum effect is really what you’re trying to neutralize, and when you don’t have the ‘noise’ of the reel waving around, your mind goes right to the line. And it stays there because that’s really all you’re feeling. You’re not feeling the mass of the reel moving around.”

In order to sell the idea, Lamson rolled out the Center Axis earlier this month at the ICAST show in Orlando, where it encouraged anglers to test it side-by-side against its traditional rod/reel setup. Both 5-weight rigs featured the same Korean-made blanks, plus similarly ported Lightspeed reels spooled with equal amounts of backing. Each configuration weighed exactly the same. But with 30 to 60 feet of line in the air, the difference between the two was obvious. While casting the Center Access, the balance moves north up the rod, giving the perception of a lighter in-hand feel. “All that sensation of lightness,” Farris says, “was not because it weighed less, it was because the weight was in a different place.”

When Farris mentions noise in the casting stroke, he’s referring to it in an engineering sense. In other words, signal-to-noise-ratio. Or, simply, interference. “Input from the line is signal to your brain. With the Center Axis, it’s a clearer connection… and a better casting experience.”

Lamson claims the Center Axis may be the most meaningful advancement in rod performance since graphite began outpacing fiberglass all those decades ago. Whether it’s better will be up to you to decide. For now it’s an innovation, ultimately, that feels like it has a purpose.

[Center Axis systems ($750) include rod, reel, and case. The C/A rod and reel are detachable and can be purchased separately. More at waterworks-lamson.com.]