Exploring the cutthroat oasis that is Pyramid Lake

If you’re looking for a 20+ pound cutthroat, you’re either high or you’re fishing Pyramid Lake. Maybe both. In the center of northern Nevada’s elevated-desert lie the remnants of Lake Lahontan, once covering more than 8,000 square miles. Today, the largest body of water left is Pyramid, home to legends of spell-casting mermaids, human-snatching babies and—more importantly—whales.

“Enormous Lahontans are why every winter we endure arctic temps, blowing snow, and surf-able swells at Pyramid, knowing the next cast could lead to a double-digit fish,” says Casey Anderson, head guide at Pyramid Fly Company (PFC). 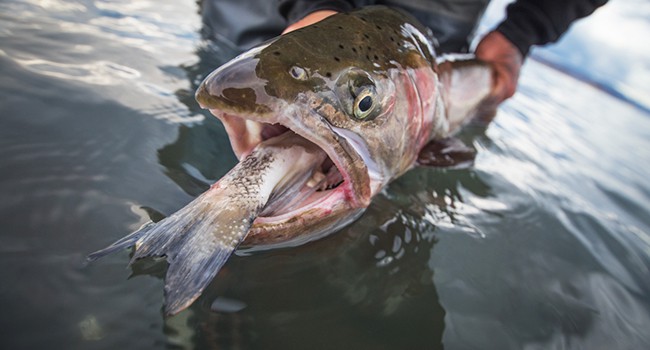 “The shop is the only one in the area catering strictly to Pyramid Lake,” Anderson says. “Put simply, if they don’t have it you really don’t need it.” 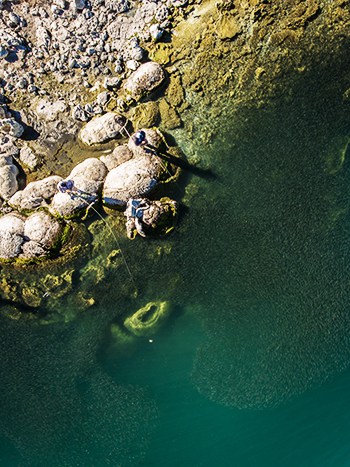 Located on Pyramid’s west shore, Crosby has been family owned and operated since 1957. It’s also the only motel-store-bar located within 35 miles of the nearest slot-machine Mecca known as Reno. At the lodge you’ll find friendly staff, as well as generous locals, salty old-timers, and out-of-towners toasting big fish that grow by the pound with each subsequent round. The property is surrounded by the Pyramid Lake Indian Reservation and has ties to the Paiute Tribe that reach back generations.

“It’s a blessing to be able to call it home,” Anderson says. “And we’re thankful for what Crosby Lodge and the local tribe have done to keep Pyramid Lake the way it should be—perfect.”

In exchange for the hospitality, PFC has made it a point to honor the local resource by delivering quality experiences on the water. This includes cracking the Lahontan code with innovative flies and a delivery system based on customized techniques. Bring a ladder for the latter, Hagerty says. “Ladder-chairs are used for fishing the dropoffs. We sometimes wade 30 yards to get to the edge and, thanks to the added height, it’s easier to cast above the waves while staying warmer and drier.” Plus, they could give you an appreciated advantage against other lake evils. 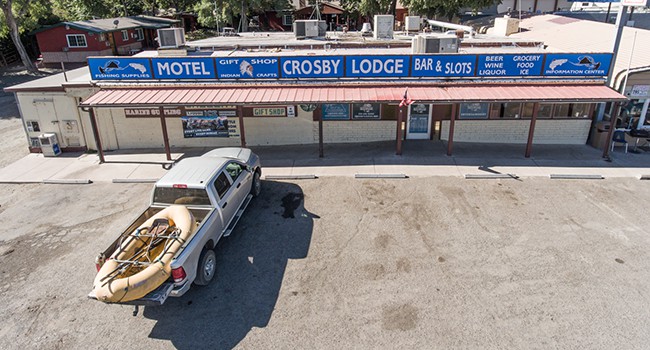 According to the superstitious, Pyramid’s water babies were deformed infants discarded into the waves by ancient Paiutes. And whether or not their mini-spirits now haunt the lake, it’s a fact that fishermen continue to lose their way—permanently—at Pyramid. Bad weather forced officials to suspend a search for two fishermen, who disappeared last New Year’s Day. The anglers puttered out in a 12-foot aluminum cartopper. No one’s seen them since. They’re not the only ones.

So keep this in mind: Pyramid Lake is an abyss, more than 300 feet deep in places, and its winter weather can be vicious. But when the fishing’s cooperative, it’s all part of a challenge that translates to good times with big cutts. Deranged, wailing water babies be damned. 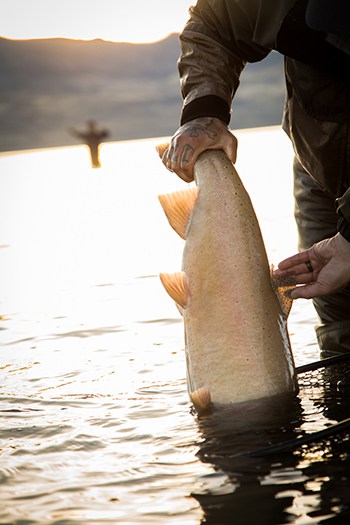 “No matter the season, chasing mega-Lahontans is a relentless pursuit,” Anderson says. “When guides aren’t fishing, we’re tying. And when we’re not tying, then there’s whiskey around the campfire, while we plot where the next lake record might be moving in to feed.”

Pyramid Fly Co. would be happy to point you to the spot and show you around one of America’s greatest cutthroat fisheries.