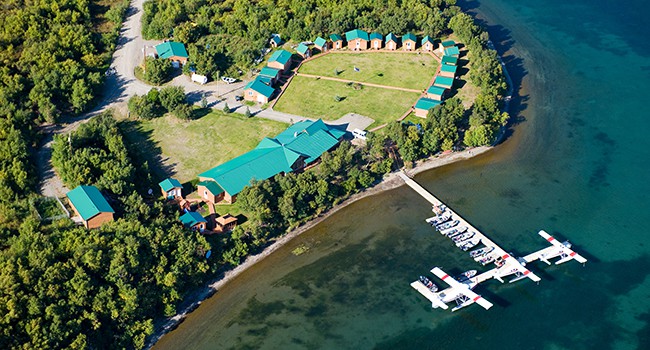 Up until recent times, the camp, with its staff of nine guides, four pilots, and two gourmet chefs, was the flagship operation in Shults’ fishing portfolio. On the occupational flipside, Shults has piloted various business entities over the years, including the Gas Pipe chain of 13 Texas- and New Mexico-based head shops, including nine in Dallas.

The Gas Pipe sells everything from pipes, papers, and incense, to grow gear, gifts, and love toys. As the story goes, “Mr. Gas Pipe is always seeking the best opportunities to make you a little happier.”

Whatever his other business interests, Shults invested dollars in fishing. In November 2013, he added Deneki Outdoors and its Alaska, British Columbia, and Bahamas fishing lodges to the mix. His daughter and son-in-law, Amy and Dan Herrig, would help oversee angling operations in Alaska, while former Deneki owner Andrew Bennett signed an open-ended contract to continue marketing efforts with the brand.

Herrig learned how to flyfish at Rapids Camp and worked there seasonally while attending college. After graduation, she partnered with her Dad, operating as VP of business, and running the company’s lodges and head shops. In Alaska, in particular, business has soared. But back in June, the head shops hit a wall when several Dallas media outlets announced that the businesses were the targets of a “federal K2 crackdown.”

Prosecutors allege that head shop employees manufactured illegal strains of synthetic marijuana sold as “K2” and “spice.” According to court documents released by the U.S. Attorney’s office, “recent studies suggest that ‘spice’ is the second most frequently used illegal drug among high school students in the United States.”

“recent studies suggest that ‘spice’ is the second most frequently used illegal drug among high school students in the United States.”

A named associate was locked up. And, according to the complaint, a number of residential and commercial properties were seized, including Fort Worth’s historic Ridglea Theater, $2.8 million in cash and investment funds, the Herrig’s $1.8 million home in Highland Park, as well as cars, planes, and more.

Neither Shults nor his daughter have been charged with crimes or arrested. Prosecutors, however, contend that seized items were either bought with drug money, or used in the sale of synthetic marijuana.

With legalized recreational marijuana gaining momentum and expanding beyond Colorado and Washington to other fishy states such as Alaska and Oregon, the synthetic marijuana fight, on the other hand, continues full tilt in the hands of federal agencies. According to the National Institute on Drug Abuse, the DEA has designated active chemicals frequently found in spice, for instance, as Schedule I controlled substances.

During a five-day span this past May, Dallas and Austin hospitals reported more than 120 overdoses linked to K2 alone.

And the makers of these drugs, in Breaking Bad fashion, continue to get craftier with the chemistry in order to stay one step ahead of the law, while the product gets dodgier by the second. Spice, K2, and other derivatives have landed users, drawn to the cheap and intense high, in ICUs across the country. During a five-day span this past May, Dallas and Austin hospitals reported more than 120 overdoses linked to K2 alone.

Although Herrig declined to comment on the ongoing lawsuit, she did note that it was business as usual in Alaska and beyond, and that the lodges are not involved.