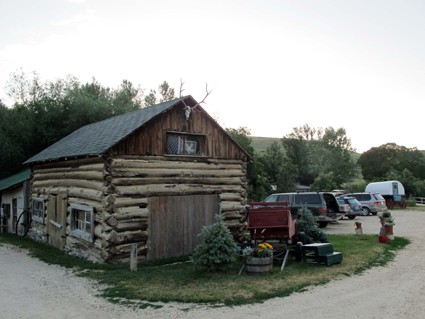 There are those flyshops we find in pursuit of convenience: they either live close to home or en route to destinations that require localized beta and specific bugs. Then there are those—farther afield, in unlikely places you visit once but may never return—that find us. Rock Creek Anglers, located in Saddlesrting, Wyoming, falls into the latter category, where fishing was the pull but I stumbled into a shop that felt immediately like home.

Saddlestring, Wyoming, is located in Johnson County, yes, the Johnson County famous for gun-slinging personas that punctuated The Johnson County War of the late 1890s. Its story and characters, such as Ella Watson, lynched by the cattle clans, and Sheriff Frank Canton, hired to lead a band of Texas killers, have since been immortalized in Wild West Americana. And in Wyoming, it’s a heyday still celebrated through brochures and state-funded campaigns glorifying a mostly unglamorous life: organic folk, working the land for an honest dollar. Today, what remains in towns such as Kaycee, Saddlestring, and Buffalo are big sky, a sprinkling of bars, cafes, and gas stations, prime cuts at the Winchester Steakhouse, and flowing stretches of underexplored rivers. There aren’t many fyshops here. 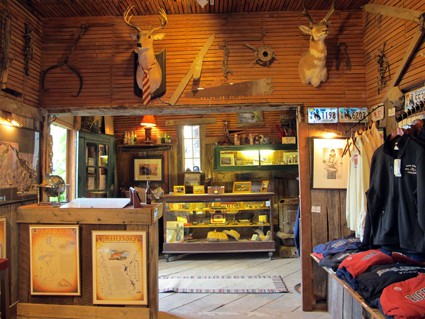 Rock Creek Anglers rests at the end of a washboard track. The “contemporary” facility was built in 1922. In its infancy it served as a plumbing parts shack, until Paul Robertson founded the fishing business—a one-man guide service with three rental rods. The adjacent Log Barn, which houses a locker room for guides (as well as a urinal fashioned from a wall-mounted sink), was built in 1891. It is listed on the National Historic Registry as the oldest building in Johnson County and the third oldest still standing in Wyoming.

Clark Smyth has been guiding in the Bighorns since 1995 and started at Rock Creek Anglers in 1998. “I took ownership in 2004,” he says. “I kept the name because I wanted to stay true to the company where I got my start. Plus our logo was designed by Paul Robertson’s wife, Susanna, who is not only a great artist but one of the best people I know.”

Over the past 13 years Smyth has worked to keep the business out of the limelight in an effort, he says, “to keep our private water a ‘secret.’ If an angler is able to find us—usually by word of mouth—and willing to take a chance fishing a location that’s often overlooked, and willing to pay-to-play, they are treated to some of the best, unique trout angling in the Lower 48.” (Although you will find intermittent public access by delving deep into your Delormes.)

Back at Rock Creek, with its full-service bar—staffed by guides—and an atmosphere where spitting chew in the corner is both acceptable (and admirable), Wyoming flavor smacks you like a cattle-prod to the groin.

“We have a three-drink minimum for our bartenders,” Smyth says. “Customers feel more comfortable drinking and booking a potential fishing trip if their bartender is drinking with them. The hazard lies in the guide’s ability to guide fishing after a night of drinking.” 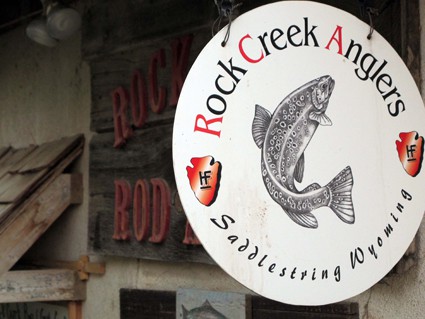 In addition to a fine buzz, the shop also has ancient eye candy, including two buffalo skulls—one of which has been dated at more than 5,000 years old. There are tools of native inhabitants on display, a one-of-a-kind assortment of stickers on the beer fridge, a “When Gentlemen Agree” Budweiser poster from a 1941 Life Magazine centerfold, and a pheasant mount that was Hopper’s (Smyth’s black lab) first wild bird retrieve.

Generally speaking, Rock Creek Anglers is a perfect social space close to excellent fishing and limited amenities—a great find should it find you.