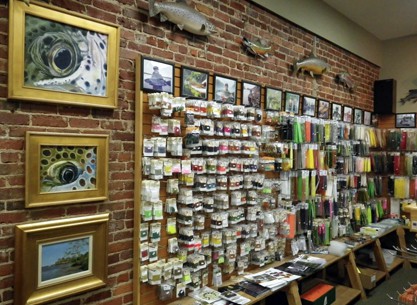 The Atlanta, Georgia, metropolis moves and shakes with more than 5 million people. It’s home to Coca-Cola and Rubbermaid, sweet red meat and BBQ, and crunk scenesters like Lil Jon and OutKast. What these entities have to do with flyfishing culture is hard to say. But beneath all the Hotlanta hype, a force has surfaced.

The Fish Hawk Fly Shop opened doors in 1974 and is today located in the heart of Buckhead, about 5 miles north of downtown Atlanta. Shop founder Gary Merriman grew up fishing the Southeast for myriad species, from salt- to freshwater. When he was forced to choose between school or opening a fly shop, a business venture took root and an education in retail followed.

“The beautiful thing about Atlanta and the Southeast in general is that there are so many options for flyfishing within a short drive,” says shop worker and local “starving artist,” Paul Puckett. “You can be in the Smoky Mountain National Park in two hours, or in Savannah chasing Redfish in three-and-a-half. Do you want to fish the Chattahoochee for stripers today, or catch some 20-inch rainbows on the Toccoa River two hours from here?” 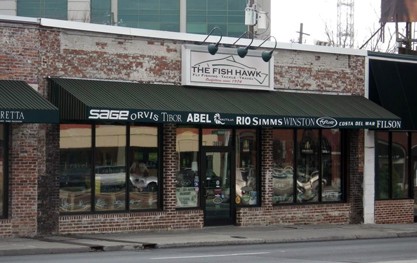 With good fishing at the finger tips, The Fish Hawk offers more than 5,000 square feet of optimized space—housing a big ol’ world-record marlin and products from Simms, Patagonia, Sage, Hardy, Scott, Lamson, Nautilus, Tibor, Hatch, and Yeti, to name a few. In addition to gear, guide services, and a fishing school, The Fish Hawk specializes in atmosphere: vids playing, bull flying, and Johnny Cash or Waylon streaming through the speakers. Eric Clapton came in last year to talk Scotland and brown trout. He didn’t spook too quickly, according to Puckett, and he left with a brown trout etching.

“I didn’t make him pay for it. But I made him leave here with it,” Puckett says.

As far as local fishing culture, the “Hooch” delivers with year-round trouting and some of the best hatch activity in the area. There’s also BBQ and raw blues riffs at Fatt Matts, and Smith’s Olde Bar for more music and a standard list of hangover instigators. 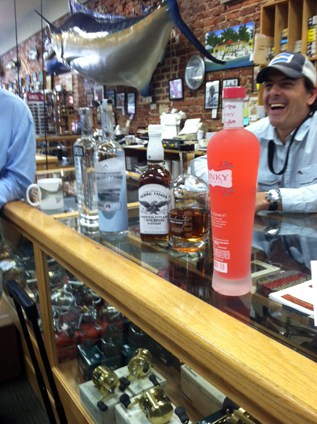 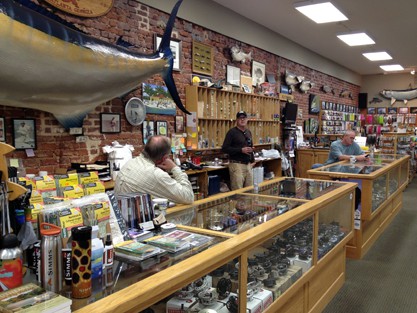 Swing by the shop on any given Friday and catch Rob “The Mustache” Smith, Gary “Stump” Merriman, Bobby “The Boat” Merriman, and Ronnie “The Guide”… who may or may not be off fishing. By late afternoon more characters start spilling in. The first act is usually David Winarski, aka “Fish Dave”, “Steelhead Freaky”, or “Paper Boy”—a regular fixture, who’s become an honorary employee. Then there’s Dan “Pretty” Joseph, infamous for single-handedly inflating fly rod prices through his longstanding breakage campaign.

From Clapton and Jimmy Buffett to former employee Frank Smethurst, the list of fishing heads goes on… and on. But, perhaps, this shop’s biggest fame claim stems from the foundation its fostered in an urban epicenter catering to everything under the sun, including the flyfishing ranks since 1974.

For more information on The Fish Hawk and flyfishing opportunities in the Southeast and beyond, see thefishhawk.com