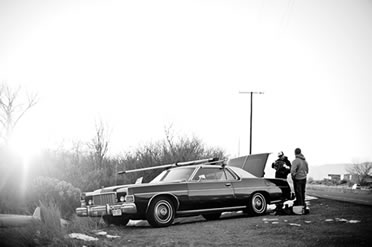 In the fall of 2010, a 1974 Mercury Marquis by the name of Clyde joined The Drake ranks as part of Beattie Outdoor Productions’ film, When Guiding Goes Gangster. An instant hit with indy rap fans and female ex-cons—and more than 17,000 views on YouTube strong—Clyde’s entry into the flyfishing stratosphere was electric. Autograph signings followed, along with late-night binge sessions and parties with lithe supermodels. But the fast life takes its toll, and rehab is rough. For several months Clyde was benched—reduced to sidewalk scrapmetal on the outskirts of Fort Collins. He’d nearly given up his dream of roadtripping across an American landscape teeming with trout and marginally employed writers and photographers—until we brought the big lug back into the fold this spring.

Clyde was offered a new lease on life, with his experiences being chronicled on these pages and various destinations online. His rebirth began as we rocketed across Colorado, with hard times behind and a day of fishing with Copi Vojta in the Roaring Fork Valley ahead.

Will Rice was waiting when Clyde arrived on Denver’s Race Street on a Friday afternoon. Out of the city, we waddled through the Eisenhower tunnel. But our biggest obstacle loomed ahead: Vail Pass, at 10,662 feet, a foreboding mountain of slick asphalt and fiendish ski traffic. In the other corner roared Clyde—22.5 feet long, V8 460, and weighing in at 4,500 pounds of forged steel swagger. When Clyde and Vail Pass collided the speedometer stammered to 20 mph, while angry 18-wheelers dominated the rearview mirror. In this showdown of mountain grit versus ’70s machismo, a black-eyed Clyde eventually limped over the summit. Iron Maiden screamed from the iPod. And an hour later, his run to the hills was victorious. We pulled into our hacienda in Basalt, where sleep ensued. —Geoff Mueller

I opened my eyes and blinked. I could vaguely detect the smell of Corrido Reposado—either emanating from my skin or an empty bottle on the nightstand. Somewhere in the back of my head the bass from a Dr. Dre song thumped: And I got sounds for the bitches, clockin’ all the riches, got the hollow points for the snitches…

Gathering my bearings, I realized I was in a motel. People were standing in the room, wearing waders and holding rods.

“Time to get up,” someone yelled. “We gotta roll.” I pulled off the covers and my waders were already on. Weird. There was a knock at the motel door. I opened it. Drake mag alum Tanner Irwin stood before me. He was decked in waders, too. But his were dripping wet—like he’d just walked in from the river.

Then a car horn sounded. It was Clyde’s. I jumped in.

Clyde was kicked into gear, and we were on our way. But it felt like the car was moving through thick jelly. Three miles an hour, tops. I blinked my eyes and we were suddenly in front of Copi’s house. He was standing at his doorstep. His hood up, a pair of dark sunglasses on. Two AK47s hung loosely from each shoulder, barrels aimed toward the ground. Copi made his way to the car.

“One is for you,” he said. His words monotone and slow.

“Dude, we’re going to the Colorado River, why do I need a gun?”

“We talked about this last night. You said you wanted to try the AK,” he said. “You got your gat?”

I walked around Clyde and popped the trunk. First I saw movement, some type of struggle. Then I looked closer and got scared. There, hogtied with his hands behind his back, was Dr. Dre. He had a strip of duct tape across his mouth but his eyes glared back at me…through me. He looked pissed. Then my eyes opened, for real. I’m sweating. Tanner, Copi, and Dre were gone. I was in my own bed, breathing hard.

“What’s wrong?” asked my wife. She was still half asleep. It’s been two days since I last laid eyes on Clyde. When we parted ways he was sitting proudly outside a fly shop in Carbondale.

“Nothing honey…” I mumbled. “It was all a dream.” —Will Rice

[Edit note: After Mueller and Rice, the keys to Clyde were passed to photographer Copi Vojta, who drove him to Salt Lake. There, photographer Corey Kruitbosch oversaw some major repairs before driving to meet Lee Church in Cali, then taking him to the Trinity, where Clyde sniffed out some steelhead. Follow Clyde’s adventures via drakemag.com or The Drake Facebook page.]