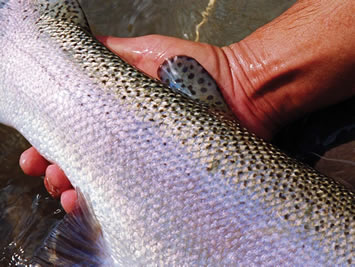 Time for a new direction in the Pacific Northwest

The trout hatchery at iDeath was built years ago when the last tiger was killed and burned on the spot. We built the trout hatchery right there. The walls went up around the ashes… The hatchery has a beautiful tile floor with the tiles put together so gracefully that it’s almost like music. It’s a swell place to dance. There is a statue of the last tiger in the hatchery. The tiger is on fire in the statue. We are all watching it.–Richard Brautigan, In Watermelon Sugar

I meet a lot of fishermen who’ll tell me how they’ve learned to stop worrying and love hatcheries. “Sure they’ve done damage in the past,” these apologists say, “but the science keeps improving. And we couldn’t fish for steelhead and salmon anymore without them. Plus we need them to put fish back in rivers where they’ve gone extinct.”

Hatchery science may have improved, but hatcheries still suck. Don’t take my word for it: A study published last December in the Proceedings of the National Academy of Science says that hatchery steelhead breeding with their wild counterparts will produce offspring less fit for survival—a trait discernable after just one generation of interbreeding. Search the database in any decent library and you’ll easily come up with dozens more papers like this one.

Broodstock programs might be judiciously applied to bring salmon back to some rivers. But here’s a better idea: Bring the rivers back to the fish. Tear out dams. Castrate with dull knives and a lot of salt all offending polluters. Quit subsidizing water to grow subsidized crops we already grow too much of in the first place. The result will be a cascade of happy improvements that benefit the whole river ecosystem, not just a few hatchery-baked fishermen and handful of hatchery employees.

I could stray into a lengthy diatribe on the seemingly intractable problems in hatchery fish pathology, genetics, and behavior. But let’s face it: If you had to choose further reading from the sources I’ve cited thus far, you’re more apt to go find a copy of Brautigan’s In Watermelon Sugar than you are to go stampeding for your prized copy of the Proceedings of the National Academy of Science. Brautigan’s tiger parable lets us in on the truth of why hatcheries really suck. Rightly understood as a political tool, hatcheries look far more potent, debilitating, and dangerous than merely some kind of flawed but perpetually improving scientific instrument. Politicians are forever plucking at the branches of science, if only because they need to use the leaves as cover for the naked corruption of their actions. In the Pacific Northwest’s Columbia Basin alone, the U.S. is spending a billion dollars a year on a hatchery-dependent salmon recovery program. Good science tells us this won’t work. But the need for scientific cover on the part of some politicians has been well-recognized by some unscrupulous scientists. These scientists produce data that compares one degraded, hatchery-dependent river system to itself, or occasionally to another. They conclude the results promising—not because of increased returns, but because hatchery science is improving. Politicians pay for another round of this “scientific” data, and each party is free to come dance at the hatchery.

For reasons that have little to do with biological health, or even sanity, the Obama Administration and key members of Congress think this is a swell idea. Hatcheries suck because they’ve masked a staggering loss of biological diversity and abundance. With a century of hatchery experimentation in the rearview mirror, nearly everything has been lost for Pacific salmon in the Lower 48, including a grip on reality. Most weeks of salmon season here in the Columbia Basin, it’s possible to track down a forecast from some misguided guide, federal mouthpiece, blogger or outdoor pundit chortling about the “near record returns of kings over Bonneville Dam.” This is so patently false it shouldn’t even qualify as a delusion.

Hatcheries suck because they dull and eventually mute our collective and communal historic memory. Before there were dams, 20 million wild salmonids swam up the Columbia each year. This has been reduced by at least ninety-nine percent. We have a river that drains square mileage from Nevada to British Columbia to the coast, now sparsely populated with too few wild salmon that are in turn threatened by too many hatchery fish. That’s a record to be reckoned with, for sure. But not as a measure of abundance.

Hatcheries suck because they relegate fish to being stage props in a play about money, set in the wire room of a multi-billion dollar racket. One particularly egregious scene in this drama is unfolding on the Klickitat River, a southern Washington tributary of the Columbia. The Yakima Tribe and the Washington Department of Fish and Wildlife have extracted bales of cash from the generous folks at Bonneville Power. Almost $400 million between the two of them, money paid to the tribe and state to unconditionally support the aforementioned unworkable salmon plan. The agreement stipulates that options like Snake River Dam removal will not be on the table. The signatories will go quietly along with whatever the federal government construes as salmon recovery. Habitat improvement projects are kosher, but there’s only so many willows that can be planted by so many school children for four hundred mil. Now a new hatchery—that can suck up ducats like a hooker at a sex-addict convention. But the offer’s only good until 2018. New hatcheries take a long while to be vetted by various attending bureaucracies. The money’s burning a hole in the agencies’ respective pockets.

To alleviate this sense of fiscal urgency, Washington and Yakima Fisheries Departments are recycling a hatchery proposal from the early eighties that was beaten back then because the science didn’t support the draconian biological impacts. Hatchery managers, for instance, are proposing to mine half of all the remaining wild summer chinook run (less than 400 fish) on the Klick as broodstock for the hatchery. This could reduce the wild chinook’s numbers to the point where the few that remain aren’t genetically viable. Thus one entirely plausible measure of this hatchery’s “success” will be that no more kings reproduce naturally in the river. The sweetener for what was already a really sour idea 30 years ago has nothing to do with a new hatchery—the state and tribe have promised to quit stocking non-native fall chinook and coho if they get to build their new chinook factory. They could, of course, for free, decide to quit stocking non-native fish tomorrow.

Hatcheries suck because they were supposed to mitigate dams. They didn’t. So now we’re mitigating the hatcheries.

Mainly though, hatcheries suck because they lull you into thinking that the fishing doesn’t suck, and that your river doesn’t suck either. This prevents the work of imagining a better fish. And a better river. Even a better world, where not all of us are resigned to watching that last tiger burn.

Steven Hawley is the author of Recovering a Lost River