The Secret Lives of Salmon and Gangsters 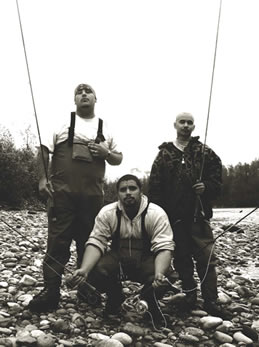 My flight was delayed an entire day. My bags were packed for a two-week stay in Guatemala City, where I would accompany an underground cadre of ex-gang members who were now volunteer chaplains entering Central America’s infamous gang prisons. As a jail chaplain myself, working with Chicano gangs in Washington State’s Skagit County, these young radicals in Guatemala had become my heroes. As far as the Jesus tradition goes, these are extreme fishers of men.

A young chaplain wades into both

Since I’d already said goodbye to my roommates and coworkers, I decided to hide at my girlfriend Rachel’s house for the extra day and read. The book was My Story As Told By Water, by David James Duncan. I started the centerpiece essay, “A Prayer for the Salmon’s Second Coming” in the passenger seat on the ride home from the airport, and did not stop until I was three beers deep at my girl’s place, looking out her back window to the bend in the Skagit River.

An unashamed, over-the-top devotion spilled from every page of Duncan’s plea on behalf of wild Northwest salmon. I knew little about these fish, yet somehow I deeply resonated with it all. Why did his informed political fury to defend—and tender personal anecdotes to describe—anadromous fish move me so? His obsession carried an unmistakable sense of spiritual wonder, as if he were caught up in the labor and ecstasy of something close to worship. Then it hit me: This flyfisherman was confessing something akin to my own haunted relationship of brotherhood and advocacy among young tattooed gangsters.

I’d written Duncan before, so, half buzzed and fully inspired, I started a long letter to the man right there at the kitchen table, comparing our callings to adore and defend such different beings. Duncan’s not a salmon; I’m not a displaced Latino youth in a street gang. So what explains our compulsion? I tried to compare wild salmon and Chicano pandilleros. Both emerge from generations of migration up and down the Pacific coast. Both bear permanent identifying markings and scars from their respective journeys and groupings. Both move in surprisingly large numbers quietly beneath the surface of Washington State’s picturesque Skagit Valley where I live.

While Duncan’s salmon are disappearing at an alarming rate, gangs are multiplying at the same clip. And yet, both those trends coincide with industrial agriculture and urban sprawl. Salmon are timid, gang youth are aggressive, I wrote. In later correspondence, though, Duncan busted that distinction, as well: “Hmm. Salmon can be damned aggressive at sea and on the spawn—and gang youth are shy of many things. The paradox is interesting.”

In my letter I went on to give the writer some good news: I’d recently started fishing. But—and this was the real news—for all the power of his renowned fishing prose, it took a shaved-head kid known on the streets as Pipe (PEE-pay) to actually get me to a river’s edge with a rod in hand.

To read the rest, purchase the 2012 Spring Issue or Subscribe to the Drake.