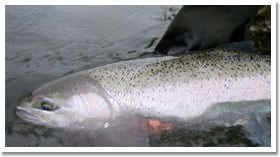 An excerpt from the winter/spring issue—on shelves now.

April rains are metaphysical fertilizers that pollinate your inner wuss, thus giving life to an emotional suckathon. This can threaten to close down winter steelhead season. Yet, despite few fresh upriver fish, with even fewer windows of fishable conditions, and with wet campfires that seldom aspire to more than smoke, it’d be criminal to deny April its due.

For winter steelheaders, April impales a guy with the finality of the season. Your lines are finally chopped perfectly for each rod you haven’t yet broken. Sinktips are dialed to hover just above mid-seam rocks that the river gods hid on a weird corner. You’ve pretty much settled on one fly and you’re swinging it with conviction. You might even see the sun.

It’s a tragic plotline. The word “passionate” has become a tired cliché that the marketing world has perverted into some faux-nuts steelheading bravado. So allow me my soapbox: Most of us winter guys are just socially inept. We’d rather hang out alone in dark basements and garages, messing with gear all summer until the winter rains give back the stoke that summer’s heat has stolen from our rivers. Then we crawl back into our waders, certain that the cold, wet isolation is why winter fish hold such an attraction.

Inevitably, sometime in late winter, you’ll have two distinctly different days. The first will come in March, when you hit the wad with the only guy you trust enough to bring into some out of-the-way schnittle. By day’s end, you’ve had some shit go down that no one will believe—nor be told about for three months. Maybe you even doubled up on back-to-back, honest-to-God, newly minted, 20-pound, ballbusting bruisers, only to farm both within minutes of each other. Fact: You will never forget this day.

You use that weak rationale to do justice to the interplanetary awesomeness of the moment, reeling up with 30 minutes of magic hour still holding on, then draining Rainer tallboys while watching the light fade from the tailgate. You might forget to go home for three days. That’s the March Yin.

Yang dictates the April day, when you’re there looking for a selfish repeat and something changes. Your hands, cracked from persistent rain and waterlogged firewood-acquisition, actually hurt now. The deathmarch hiking has punched enough holes in your waders to make any warranty claim suspect, and you’re plagued with a burning foot rot that looks like human cornflakes. You doubt whether any new fish are coming, and the constant wondering is starting to grind. It’s also kelt season, the dreaded time to pull the fly out of the slow water early, because a pile of downriver fish have taken up residence and you know better than to harass perfection. The Hope you partied with all winter has run off with a summer steelheader, and she won’t be back for eight months.

That’s the thing about winter steelhead season: It ends, no matter how hard you try to prolong the bleeding. So you man up and bow to the curtain, respecting the water that nurtures such flawless, wild, native beauty. It’s a time to say the thank yous and begrudgingly mutter your goodbyes, then head home worn and apologetic, back to the basement for another long summer of feigning happiness while everyone else plays in the sun.

Jason Koertge recently returned from a fall trip to Sayulita, Mexico. Which is clearly no match for a winter trip to Oregon.