The Flies of Enrico Puglisi 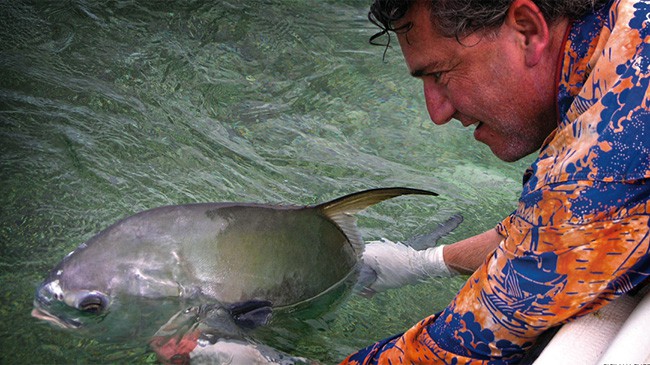 I WAS A LITTLE SURPRISED when Enrico Puglisi told me that his favorite permit fly was not his EP Crab. Nor was it his lifelike Descendent Crab, or his Palometa Crab, or even the fly he named after the fish itself, the Permit Crab. It’s a shrimp pattern. More precisely, his Spawning Shrimp, #4, in tan.

I was telling Puglisi how, for a while now, I’ve been a huge fan of all of his flies, including the Spawning Shrimp, which I’ve found to be effective on Bahamian bonefish. But I loved his crab patterns the most, and in particular, his Permit Crab. I use it for stripers on my local flat, since the fish there are as liable as a permit to take offense to my offerings. I felt that by using his Permit Crab, I was letting my stripers know that I took their concerns seriously. And then the 60-year-old Puglisi dropped it on me: “No, no. It is the Spawning Shrimp that is best for the permit,” he said in his guttural, Old World Italian-accented voice. “You should really try it on your stripers, too.”

The reason the Spawning Shrimp works so well for permit, he believes, has to do with both the fish and the angler. A real crab freezes when it sees a fish. But anglers are wired to want to move a fly, to give it life. The Spawning Shrimp, of course, should be stripped, since real shrimp, when they see a predator, “run for their lives,” Puglisi says.

Puglisi grew up in Sicily. The closest he came to flyfishing back then was when he and his father, a mailman, would catch actual flies and impale them on hooks to catch fish, like Hemingway’s Nick Adams. Puglisi became a well-known chef in his Sicilian town. But then he got married and his wife convinced him to move to the States in 1980. “I had a good job, but you know how it is,” he says. “Once you find the right one, you forget everything else.” He easily found employment near his new Long Island home, working the kitchens in big Manhattan hotels, like the Ritz-Carlton, and a series of smaller restaurants. Then he discovered flyfishing for trout.

Puglisi fished the Connetquot, a spring creek on Long Island, then the Catskills in upstate. He learned English by reading fishing magazines. (Note to nonnative English speakers: This is not recommended.) He taught himself to tie. His first fly, a Muddler Minnow, took him a month to finish. He owned a fly shop in Little Neck for six years. His gaze eventually-finally-fell on the saltwater that surrounded him. “I discovered the stripers and blues and said, ‘I think I’m going to like this.'”

There was one problem, though. A single bluefish would destroy the bucktail and chicken feathers on the fly he’d spent 20 minutes tying. “It was not working for me,” he says. So Puglisi started looking for a durable synthetic material. He found it in a store called Fabric & Home Bonanza, near the curtain section. It would eventually become his “EP Fibers,” which now include “3-D” (multicolored blends that mimic the ever-changing colors of baitfish) and the ultra-supple “Silky” versions. He met resistance early on. Old salts weren’t quite ready to give up on their naturals. “Then I proved my point,” says Puglisi.

Puglisi is well aware of the parallels between fly-tying and his past life as a chef.

“If you want to be a good chef you have to be very creative with the palate but more so with the presentation. It is everything. It’s the same with the flies,” he says. “With food and flies, you first create in your mind, then use your hands.”

Permit are, of course, his most finicky piscine customers. Puglisi caught his first in Belize many years ago. He makes two trips for them annually, to Mexico in the spring and Belize in high summer. And he says the Spawning Shrimp is the key to his success.

It’s a rather simple tie, even though it took him months to get it just right: Sparse EP Silky fibers, crustaceous rubber legs, that orange sac below the abdomen, and those lead eyes. “I truly believe in the eyes,” Puglisi says of the Spawning Shrimp. The same could be said for his entire body of work.