The IGFA calls Steve Huff “the most well-respected guide in the history of flats fishing.” In Andy Mill’s book, A Passion for Tarpon, he calls Huff “bar none, the best tarpon guide alive, the best there was and the best there ever will be.” Though he spent the first half of his career guiding the Lower Keys, Huff has spent the past twenty years in the Everglades, where long-time Drake contributor Monte Burke caught up with him for a day of backcountry tarpon fishing.

WE SKID TURNS THROUGH THE MAZE OF BACKCOUNTRY MANGROVES. A few stars are visible in the pale early-morning light, but they are fading, soon to be hidden again. Steve Huff is in the back, the tiller tucked under his armpit. He is in his element.

I can’t help but think the clichéd thought: “How in the hell would I get out of here if you keeled over?” I ask. Huff’s smile straightens out his cotton-white mustache.

I gaze at his hands for maybe the third time that morning. You can’t help it. Stories are worn into those hands, maybe even Commandments. They are gnarled by calluses and deeply etched scars, parched by decades in the sun. They look like old mangroves, whited-out by the elements. They have handled countless world-record tarpon, bonefish, and permit. They have poled thousands of miles. They have built unparalleled flats boats from scratch, including one from three decades ago that he still uses. They are the hands of a man who has never had an email address.

The weather is perfect, sun with no clouds, just a light, rippling wind. The tarpon are in, Huff says. They are laid up. I am perhaps a bit too jazzed. Falling asleep was impossible the night before. I stand on the bow, my knees scraping against the raised casting platform that I don’t dare ascend. I am too clumsy. We are at the boca of a river.

This is where Mr. Watson (of Peter Matthiessen’s Killing Mr. Watson fame.) once lived, Huff says, poling slowly and deliberately, never taking his eyes off of the water. He spots a tarpon—a serene beast at rest. My mind empties, swiftly. It’s something we all seek to achieve somehow, this willful clearing of the brain. Some find it through alcohol, drugs, sex, yoga. Some of us fish for it.

She’s facing left. I cast there, tentatively. I am unaccustomed to casting for fish this large. I blow it. The fish flushes, pushing a boat-sized wake. It’s no problem. There’s another one around. We find it, and I screw up that cast, too. Then we find another, and I blow it again. A few tarpon roll in the distance.

Huff is a Hall of Famer. He’s guided Del Brown, Tom Evans, and Billy Pate. He once turned down a trip with George W. Bush because he was already booked. He has a static list of 20 clients. One of them once gave him a condominium as a tip. I’m here as a fluke, only because a regular couldn’t make his trip and suggested I take his spot. Huff says he’s actually seen tarpon yawn and shudder. He calls them heroin. He is perhaps the world’s foremost dealer in this fish drug. He is a legend among a legion of guides, their DiMaggio, still in his prime. He says his only role in this entire endeavor is to make an angler’s dream come true.

He plays the role of coach/mentor/psychologist well. I’ve now horribly blown three great shots. By all rights, I should be a slobbering mess. But I’m not.

“We’re going to get one,” he says. I believe him. Later in the day, I finally make a good cast, right in front of the bigger member of a duo of laid-up tarpon. I get no response from the fish, but am buoyed by the act, like a golfer in the midst of a bad round who finally feels something click on one swing.

To the right. I see it. A monster. I make the cast immediately, make one strip, then feel a pull I will never forget. Before I can even process a thought, she clears the water behind us. Somehow Huff has ducked his head under my line at just the right time, avoiding a clotheslining.

Half an hour in, I realize that my face has been contorted into a rictus, the open-mouthed grimace of the dead. I am pulling as hard as I dare, changing directions, doing whatever Huff tells me to do. Yet I can’t seem to get the upper hand. My back is numb, my legs raw from rubbing on the casting platform. I see now why people say they sometimes give up, that it’s easier to get a few jumps from one like this and just call it a day. But I can’t do that.

She pulls the boat and its two occupants upriver a mile or so, to a mangrove-lined feeder creek barely big enough to fit all of us. This is probably where she was born. I notice that Steve has put on a pair of orange landing gloves.

The fight has taken two hours. I am slightly embarrassed, but not enough to stop. The fly line has started to come apart, stripped by submerged mangrove roots. Huff tells me that Pate once fought a tarpon for 12 hours. Pate would have been a lousy fishing partner. I swear to myself that I will get better at this, someday.

She finally comes up, leading with that huge prehistoric mouth. Nearly 150 pounds of silver scales with a sheen of greens and purples. Steve holds her by the mouth and removes the fly. He revives her. She swims off. Waves of pleasure and relief nearly bring me to my knees. It’s my first.

Congratulations, says the dream-maker, removing the gloves to shake my hand. 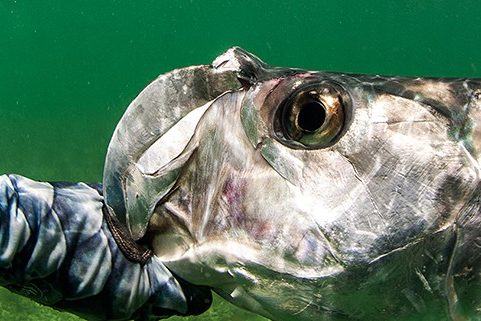