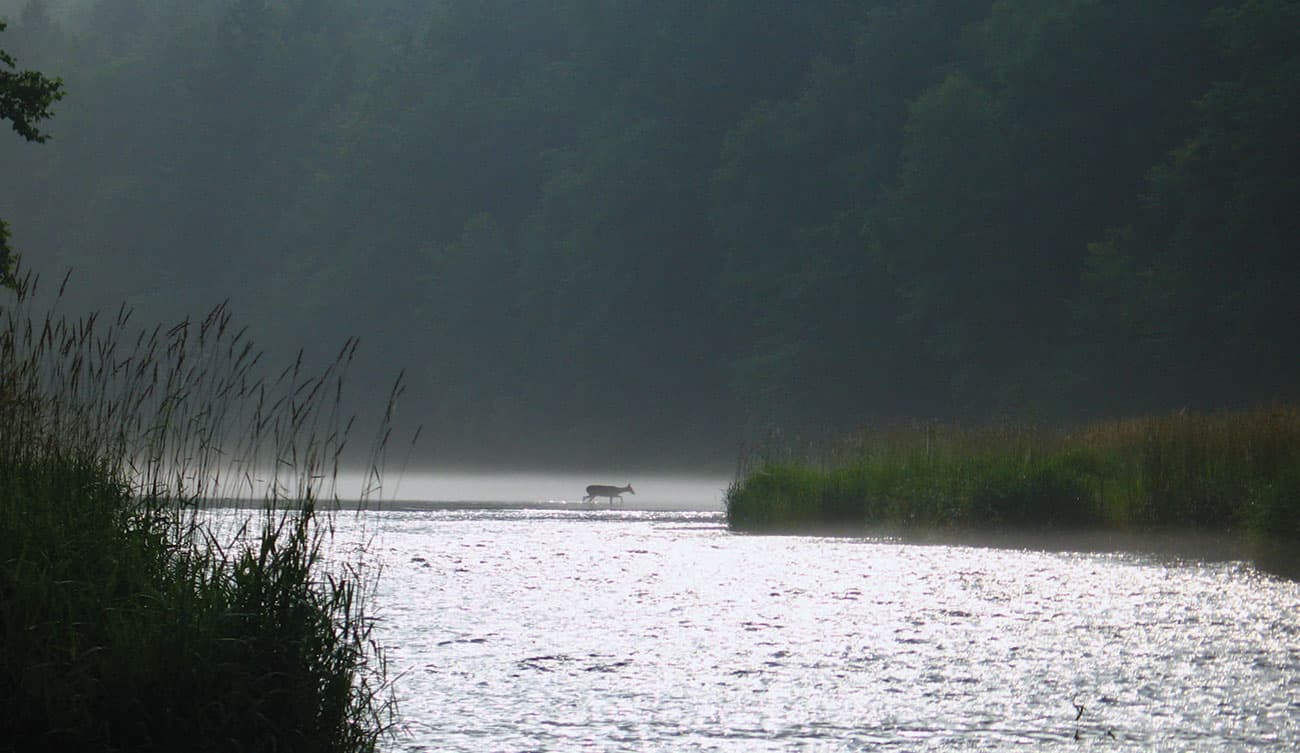 Another day on the Delaware

This was once one of my favorite spots in the Catskills. Paul and I used to fish it a lot before he moved to Montana. It’s a good place for Isonychias in the fall, and fishing a big dry in October in the East is something to be relished. I was last here more than a decade ago, just before the nearly 60 undeveloped acres on the river’s eastern bank were sold.

It’s mid-August now. I didn’t see another angler on the drive up. This river is beautiful, pastoral. But it can be a pain in the ass to fish, especially in high summer.

At the pull off, I rig up and then pick my way down the steep bank to the water. Fog enshrouds the entire valley, making it cool enough for a synchilla. There are spent trico spinners on the water and two fish rising in the pool. I walk downstream a bit and then cross the river to get a better angle on them. This pool looks pretty much exactly like I remember it: deep and clear, and with a bottom marked with medium-sized boulders.

It doesn’t feel the same, though. I can’t help but think about the person who now owns a big portion of the property on the pool. That person is the eldest son of the President of the United States. Though I’ve entered the river from a public access site and will stay in the water for the entire time I’m here, I’m still a bit leery. The law in this state can be murky on this type of thing.

I tie on a trico and try to gauge the feeding rhythm of the lowermost fish. And then I start casting.

I don’t know Junior. You don’t, either. How you feel about him is much determined by which side of the partisan divide you’ve chosen. He is either helping his father protect American values or he is aiding and abetting a demented conman. He either took a secret meeting with Russians because he is a political neophyte or he did so because he is a traitor. There is no middle ground anymore. (Junior didn’t want to talk for this article, by the way.)

But there was, possibly, some hope with Junior, at least when it came to us. Perhaps you recall from the campaign that he’s a sportsman.

That’s how Junior sold himself. That’s how he courted sportsmen as voters. He was a hunter and a flyfisher. He was going to be our advocate and look out for our interests. He would fight for our public lands and waters. Junior made these promises on the campaign trail, most notably in an interview with Field & Stream and during a media summit in Fort Collins, Colorado, sponsored by the Theodore Roosevelt Conservation Partnership.

And, in an interview with the website Wide Open Spaces that was posted the day after the election, Junior made an even more emphatic case for why sportsmen should get behind his father’s administration:

“We are going to make sure things are taken care of. The big joke at Christmas this year was that the only job in government that I would want is with the Department of the Interior. I understand these issues. It’s something I’m passionate about. I will be a very loud voice about those issues in my father’s ear…We are going to be about making sure Americans can get out and enjoy hunting and streams. These are all our woods and waters.”

I’ve thought about those statements a lot in the past few months, as I’ve watched everything unfold. His father’s Environmental Protection Agency head is a climate-change denier. His Secretary of Commerce is encouraging overfishing. His Interior Secretary—who was sold as a white knight for sportsmen—has suggested that we shrink some of our public lands, which likely opens them up to various mining, logging, and oil and gas companies.

Junior’s father signed a bill that allows coal companies to dump heavy metal waste in headwater streams. He issued an executive order that would roll back protections for rivers, streams, and wetlands, and the fish and wildlife that live within them. He has slashed funding for national parks. He has made it easier now to drill, log, and mine public lands, including the Arctic National Wildlife Refuge. His proposed budget would cut funding for the EPA (by 31 percent) and the Interior (12 percent) and increase funding for oil and gas drilling on public lands. His budget would also cut funding for NOAA (National Oceanic Atmospheric Administration) by 16 percent, and end programs for restoring the Great Lakes and Chesapeake Bay.

And all along the way, Junior didn’t do or say a thing.

There are now five good fish rising regularly in the pool. I lose one. I hook another and manage to land it, a solid 14-inch brown. And then the fog burns off and I feel the full August blaze on my back. The tricos have waned and the fish have become more cautious, so I decide to walk downstream to reacquaint myself with the rest of this stretch of water.

The river is quiet today. The nearby road has only the occasional car whooshing by. That silence was hard won. The huge natural gas field known as the Marcellus Shale lies beneath the Catskills. The only reason that there is no fracking in this area today is because of the efforts of a group of dedicated people, which included sportsmen, who came together to fight it. That fracking ban feels a bit more tenuous now than it has in years. Fracking isn’t just about accessing natural gas. It’s also about a lot of other things that inevitably come with it. I wonder if Junior would like having all of those trucks full of fluids and chemicals barreling by his house at all times of day and night? Or a wastewater pond up the hill from his place?

As I walk, I spook a fawn lying in the dewy grass. A female bald eagle flies off as I round a bend. I see the odd fish rising in the series of riffles and pools, so I tie on a foam beetle and take some flicks at the banks. I fail to move anything. I spot a trail that runs through the grass and back up toward Junior’s house. It’s worn just enough to suggest occasional use.

At the end of the run, I decide to turn around and walk back upstream to take one more look at the first pool. When I get there, I spot a big head breaking the water. I wade painfully slowly up the bank to the side of the fish. A trico spinner fails to get any notice. So I tie on an orange ant. My first cast is short. On the next, the brown takes the fly on a pretty, head-to-tail rise. When fish reaches net, I measure it against my rod. It’s nearly 17 inches. There are much bigger fish than that in this river, but this fish makes for a happy mid-August day.

Junior, it is said, is fairly quiet and reserved when he’s up here, away from Manhattan. In fly shops and restaurants, he doesn’t call attention to himself, conduct his father would have a hard time pulling off. Guides who know Junior say he genuinely likes to fish, that it’s not an affect. His social media feeds are filled with grip-and-grin fish photos. He takes his kids fishing. The pictures make it clear that he does most of his fishing in the Catskills and not at private clubs.

I was at an event recently when someone asked Thomas McGuane if he had a favorite type of flyfishing. “Garden variety public trout fishing,” he replied. I think most of us would agree that fishing public water—for trout, steelhead, bass, stripers, redfish, bonefish, tarpon—is what American flyfishing is all about.

On this public water in front of Junior’s house, I catch one more brown—a little one—on the orange ant, and then decide that it’s time to move on. I hop in the car and head for another pool on this gem of a public river, thinking about how lucky we are to be able to fish it and how that good fortune comes with responsibilities.

Breaking promises made to groups of people, as shitty as that is, is just part of politics, I guess. But, when it comes to Junior, it’s the human part that I find so incomprehensible. He calls himself a sportsman. He apparently loves flyfishing. He’s passing the sport down to his children. He fishes public water. He owns a place on one of the premier trout rivers in the country that, again, happens to be public. He has that incredible pool right in front of his house. Can’t he see how important it is to protect water like this? How is it possible that he doesn’t?

[Monte Burke is the author of the New York Times bestseller, Saban, The Making of a Coach. He is a contributing editor at Forbes.]