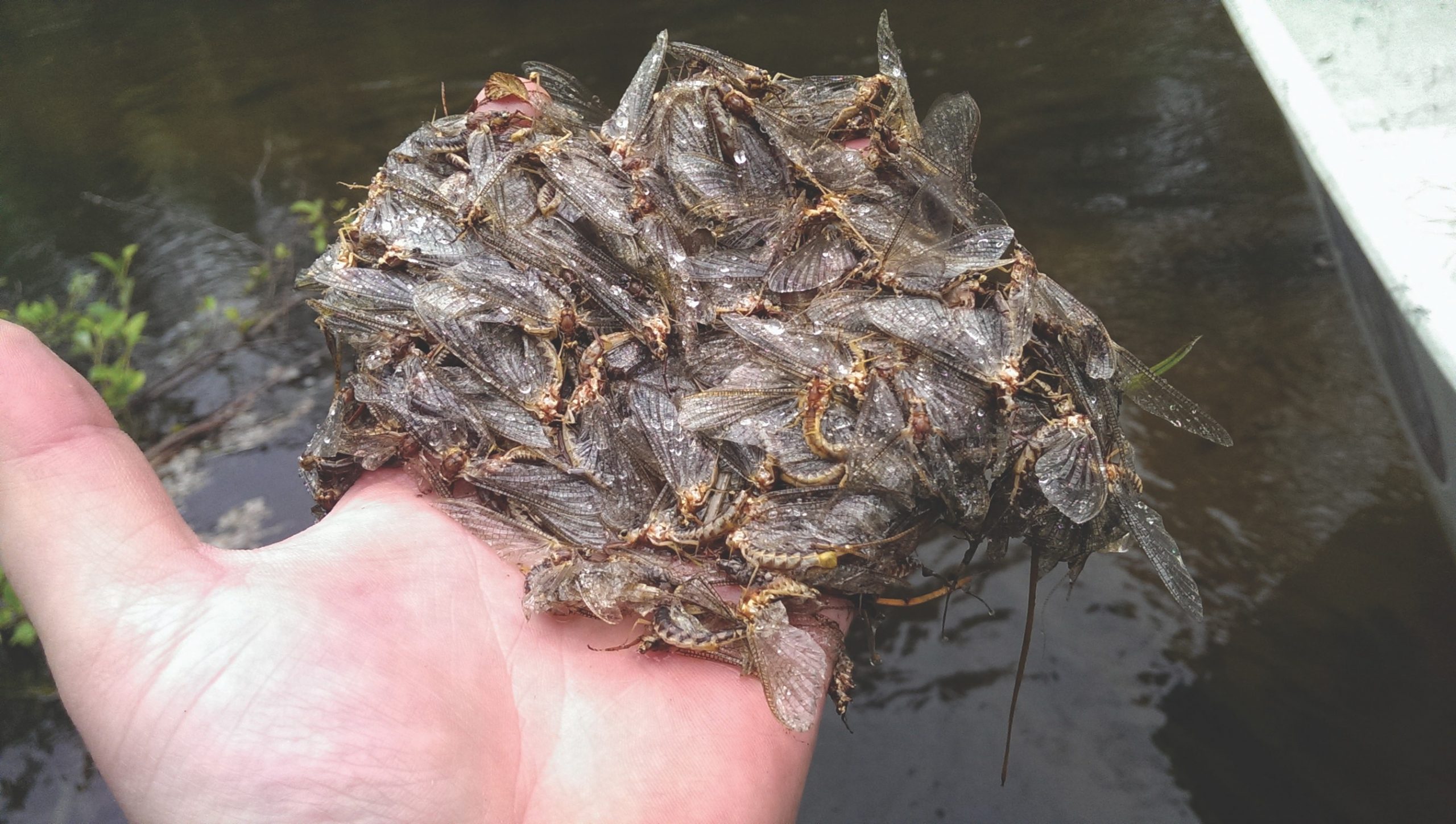 The bigger they are, the harder they fall. 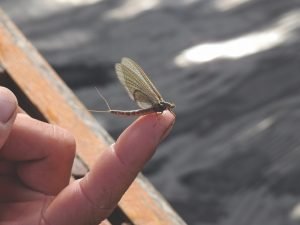 The hex facts are so difficult to digest that over the decades they’ve taken on a mythical, even biblical, quality. Yes, the hatch can be so thick and large, stretching up to five miles in the Great Lakes region, that it is occasionally picked up on Doppler weather radar and mistaken for thunderstorms. Yes, there are times in Northern Michigan, or around Lake Erie, when specially equipped snowplows are summoned to clear the roads of two-foot drifts and to mop up after accidents. Yes, hex can become so dense on the river they create a whiteout, impossible to even cast through.

But the best non-myth of all is the magic that happens with brown trout when the spinners finally fall on streams. “It’s like big-game hunting,” says Andy Partio, the owner-guide at Old Au Sable Fly Shop in Grayling, Mich. “It’s the only time of the year the biggest fish are gonna rise.”

There’s also a flip side: The narrow weather and territorial window, and the intense nocturnal challenge. As noted on the website for Northern Michigan-based Hawkins Outfitters: “Hexes hatch, mate and die primarily in the dark in late June. Imagine hearing, not seeing, a fat 24-inch brown slamming the surface. As a result, it can be some of the most exciting dry fly fishing of your life.”

There is also the challenge of crowds, the patience required to battle buck fever, and the snowstorm of large, cold, squishy, squirmy bugs that blankets boats and suffocates anglers. “Yes,” says Partio. “It’s gross.” 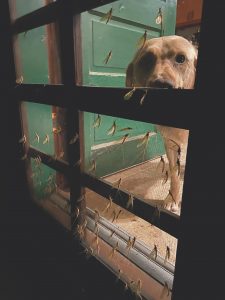 The largest mayfly in North America (reaching up to two inches in both body and wing span), Hexagenia limbata can be sporadically spotted from Florida to the Canadian border. But the preferred region is the Upper Midwest and Great Lakes. Ground zero is the northern lower peninsula of Michigan, including the Au Sable, Pere Marquette, Muskegon, Manistee, Pine, Platte, Pentwater, Boardman, and more than a dozen other lesser-known streams. Hex need black muck and limestone-rich marl to burrow and hatch in their two-year life cycle, not cobble or freestone. The largest hatches occur on shallow lakes (especially Lake Erie and Lake St. Clair east of Detroit) and the second largest fall on nearby rivers with plenty of muck and impoundments (and the necessary coldwater habitat for trout). The hatch also requires warming temps (upper 70s, low 80s) and high humidity. The short season typically begins in mid-June and lasts into early July, but there are a great many variations. Too much heat, too much cold, or violent weather can alter or ruin the hatch.

Hex can be fished as a nymph, an emerger, or a dun, but it’s the spinner fall—not the hatch—that is the main angling attraction. After hex hatch, they fly upstream in thick swarms like migratory birds, a visual treat in and of itself. The hex seek refuge in trees and molt, then mate at high altitude. The females eventually lay their eggs on the water and die, wings translucent and horizontal, while the males join them.

Galloup is best known today as the father of the modern streamer and the owner-guide at the Slide Inn on the Madison River in Montana, which he bought in 2002. He also deserves to be called the godfather of hex, having opened his first shop, the Troutsman, in Traverse City, Mich., in 1981. In those early days, when hardly anyone nymphed, his business revolved around the hex. In the mid-1970s, Galloup tied what would become the first such nationally available fly, the Troutsman Hex.

Galloup once spent sixty-six straight nights on the hex hunt, mostly on foot, netting nine fish over 28 inches long. In one outing, he landed three of those trophy fish, a brown, an Atlantic salmon, and a steelhead, without moving a step—and all of them a little more than a rod tip away. Beyond the sheer mass of the hex, it’s the vibration waves or tactile sound transmitted by a hundred thousand bugs hitting the water in distress that attract big fish, Galloup believes.

In all those adventures, Galloup estimates he hit prime hex conditions just ten percent of the time. It was worth it, he says, comparing it to standing in a productive tarpon flat. “I’d get the shakes in my legs,” he recalls of his hexing days. “I always told myself that if that ever went away, I’d quit.”

For decades, anglers from around the world have been booking annual trips to Northern Michigan to experience “the shakes,” figuring they’ll need a minimum of three days but hoping for a week or more. The rising popularity of drift boats has made it easier to bounce around than in Galloup’s wading days.

“I have a family that’s booked June 30, July 2, and July 6 every year for more than a decade,” says Ethan Winchester, who can access a half-dozen hex streams as the director of operations for Boyne Outfitters in Boyne Falls. “It’s usually good bugs on two of those nights.”

Hex waters can still be reached by foot with public, wadable water readily available, but floating is much preferred for flexibility and range. Hex vets typically stake out spots by 8 or 9 p.m., then lie in wait for the headliner act to begin, maybe throwing a few emergers, duns, or even brown drakes before the real show begins. The spinner fall typically arrives en masse at 10 or 10:30; the sound has been compared to a powerline-like hum, but Galloup describes it as a “gentle wind.” It’s followed immediately by a small-fish feed, but after about a half hour, the little guys back off and the big browns arrive. Game on. The spinner fall can be fished for a few hours, or sometimes right through until dawn.

The Au Sable, with headwaters just above Grayling, resembles a lake: Spring-fed, slow, and meandering on its 138-mile journey south and east to Lake Huron. It features major, hex-hatching impoundments along the way, starting behind the Mio and Alcona dams, from which massive tubes of hex will hatch, fly upstream, fall, and provide filet mignon for browns that can measure 25 inches and weigh five pounds. 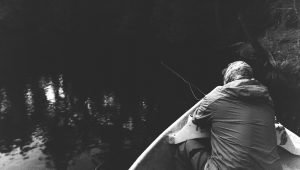 Partio has been an owner-guide at Old Au Sable for almost twenty years (the shop’s origins date back to 1868). Here at the apex of hex, strategy and tactics have evolved to the point that, he says, “if you’re dialed in, you can hit it every night.” That requires, he admits, constant prospecting and a willingness to “hopscotch around.” And it’s not quite every night. Like most things in life, hex are best in moderation, so when the river is literally covered with spinner falls, there’s only a lottery-like chance of a strike. On one such night, Galloup set his rod and reel down on the spinner fall coating the surface, took out his camera, and snapped a photo of his suspended gear.

“Shorten the cast, don’t forget the feeding lanes, and be patient,” Partio advises. Hoodies and baklavas are standard attire, along with closed mouths. Headlamps are helpful in getting on the river but must never be turned on when the spinners arrive. The thorniest issue is the sensory overload felt by anglers, heightened by the jarring sips and slurps of trophy browns dining a few feet away in the pitch black. Galloup has had clients fall out of a boat from vertigo, and he even tweaked his reels to crank in only one direction (anglers became so disoriented they would reel the wrong direction).

While Partio has many colleagues who rate the Hex above all other bugs, he is partial to the brown drake as his GOAT. But Galloup gets the last word. Cicadas and salmonflies dance through his brain before he circles back to the hex.

“It’s gotta be,” says the godfather. “When you hit it right, it changes you.”