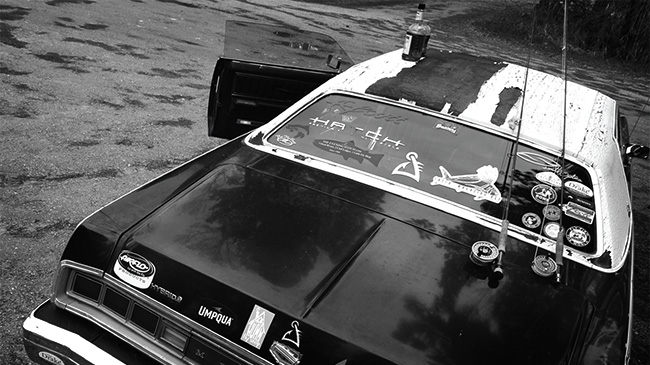 CLYDE HAS A FLAT. I can see it from the boat ramp of Montana’s Bitterroot River. The front of the old Merc is sloping toward the passenger side, and while I’m happy to discover that there’s a spare in the trunk, I’m unhappy to discover that the jack is missing its handle. I’m unhappy again when I throw the flat and my waders into the trunk and slam it shut, locking Clyde’s only set of keys inside.

I’d hoped that a call to a locksmith would bring a quick solution, but the man on the other end of the line couldn’t help. “I’m about six beers deep already, and I don’t really feel like leaving. Know what I’m sayin?”

The next key-maker sounded sober and agreed to help. Thirty minutes later he pulled up in an old sedan with a golden retriever riding shotgun. When he got out of the car, I noticed he was missing half his left thumb and pointer finger, and was carrying a holstered pistol. He walked to the back of Clyde without a nod or a “hello,” stared at the trunk for a few moments, cocked his head to one side, rubbed his chin, and asked, “You got anything valuable in that trunk?”

“Things you don’t want broken, or are too expensive to replace.” I was confused about the relationship between the value of the trunk’s contents and the lock. But I said that yes, there were rods, waders, and a half-bottle of Old Crow in there. Then I asked why it matters.

He paused to pull open his jacket, revealing the pistol. “Or I can just shoot it out from here.”

THIRTY HOURS EARLIER I’d landed at Pangborn Airport in Wenatchee, Washington—a terminal with one gate, one baggage claim, one ticket counter, and a handful of ticket agents who are also the baggage crew, and possibly the mechanics. (If you want to drive Clyde, you fly first, ask questions later.) 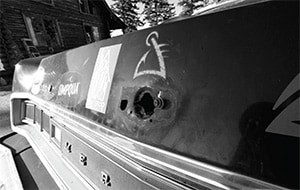 I hit the road heading east, with visions of early-season Skwalas and March Browns on the Bitterroot. Powering over a steep hill outside Spokane, I rode engine compression on the downslope until a slight exhaust sputter turned into a series of resounding shotgun blasts. This helped other drivers keep their distance. My friend Dominic lives in a cabin just above the 5,000-foot mark on Mount Shook, near the southern tip of the Bitterroot Mountains. After leaving highway 93, it’s three miles of nasty off-highway driving to his front porch. The spring washouts and ruts made the trek especially daunting, and I was concerned that Clyde might bottom out at any moment. But he floated across every water-filled pothole like the boat he is.

We chose to float the upper river, one of the Bitterroot’s most picturesque runs. It’s classic freestone water with a mix of fast riffles, towering rock faces, and flawless views of Trapper Peak—the valley’s most photographed summit. The likelihood of encountering early-season hatches and less-than discerning cutthroat had morale high.

But sometime after lunch the wind picked up, the clouds moved in, and the air turned to the kind of cold that slips down your neck and shrink-wraps your coin-purse. We caught a dozen decent fish throughout the day, but by the time I toasted the boat ramp with my last shot of Old Crow, all I could think about was Clyde’s heater.

DOMINIC AND I CONTEMPLATE the locksmith’s smoking-barrel offer. It’s a tempting proposal and possibly the only chance I’ll ever have to justifiably shoot the ass end of a car. But I’m concerned with the aim of our marksman—Three-Fingers-McGee— who looks likely to damage more than the lock. Plus the gas tank appears to be in the line of fire.

At times like this, you have to ask yourself, “What would Tom Bie do?” Maybe it’s the Old Crow talking, but I’m thinking he would’ve probably pulled the trigger himself by now. So with a nod to George Costanza’s “do everything the opposite” philosophy, I decide to play it safe and go the bullet-free approach.

The locksmith soon got to work with a cordless drill, mallet, and chisel. He drilled the center of the lock, and pounded and chiseled around it, repeating the process multiple times, making little headway. I’m not sure what I got for $75 an hour, but it wasn’t a sharp drill-bit. Nevertheless, the lock finally fell into the trunk, and a slight twist from a flat screwdriver opened it. I found the keys, paid our would-be shooter, and we hit the road.

Time and alcohol are great healers, so Dominic and I were soon laughing about our luck rather than cursing it. Clyde’s old trunk key is now useless, so if you have to get in the back I recommend a long, slotted Craftsman. The spare key, a stone-grounded rebar shiv, is under the backseat floor mat.