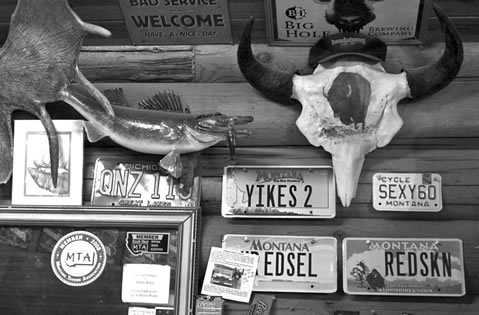 Saloons tucked away in the small Rocky Mountain communities that survive on the ebb and flow of anglers are where fishing stories either start or end. The more dilapidated, the better. If flakes of hide splinter off a 60-year old mule deer mount, or pornographic cartoons denote the men’s and women’s restrooms, then grab a seat and enjoy.

I believe Grogan’s was the former name, though I think most refer to it now as simply the Glen Bar. Cleaner and brighter than most, and roughly the size of a double-wide, it’s not the biggest one-horse watering hole in Montana. But because you can beach a drift boat, walk past the masked scarecrow to the rear entrance, wet your whistle, then resume fishing on the lower Big Hole, it’s one of my favorites.

At the tail of a particularly slow June afternoon, a friend and I made a beeline from the water to the bar in our waders and boots, found two open seats opposite the taps and ordered a round of gin and tonics.

Other patrons bounced between the patio and the bar, shuffling drinks, snacks, and cigarettes from one to the other. The atmosphere had all the makings of a community barbeque picnic.

My friend made tracks for the restroom after the first round, so I sat tinkering with my digital camera. I used it on the water just before beaching the boat, but in a mad dash to escape the Big Hole’s infamous marauding mosquitoes, I didn’t put it back in the case. “You want to take my picture, don’t you?”

Hypnotized by the flashing colors scrolling away on the camera’s tiny two-inch screen, I didn’t realize someone addressed me until I heard the question again. “You want to take my picture, don’t you?”

Seated to my right, a tall, middle-aged woman looked at me with the unsteady, glassy glare of inebriation. Her long, crimped hair draped over the side of her face and down her shoulder; obviously dyed black to match her eyebrow pencil color—the guise of a cougar trying hard to recapture an attitude she’d lost years ago. Dumbfounded, I stared back with a wide-eyed, blank expression, struggling to find the words.

“Yaknow, back in the siffenties, I wassin Playboy magazine,” she said.
“I’ll bet you were,” I said with an inflection of sarcasm.
“You want to take my picture, don’t you?”
For a second or two, I contemplated where this was going; ultimately deciding that I didn’t care. I replied, “Yes… I… do.”

Her head and upper body swayed on the brink of unbalance and if it weren’t for the one hand on her hip and the other wrapped around her drink on the bar, I’m not sure where she would have toppled.

“People always want my picture. . . Back in the siffenties, I wassin Playboy magazine,” she said again with slurring certainty.

I popped off the lens cap, adjusted some settings, flipped my hat backward, and improvised the role of a real photographer. She raised her eyebrows, squinted her eyes, and made love to the camera like any well-trained professional—showing the sexiest look she could muster.

“OK, all set?. . . On three then,” I said.
Sometime between the two and three count, a pair of mischievous eyes leered behind her shoulder, an arm reached around to her upper chest, and a hand cupped the air around her breast. Suddenly the scene had all the makings of a dirty old man copping a feel.

My model didn’t flinch. Either she couldn’t see the man’s hand sprouting from under her armpit and forming a bowl around her ta-tas, or she didn’t care. The shutter flickered, he withdrew his hand with equal swiftness and tact, shot me a perverted smirk, rolled his eyes, and went back to his drink.

I asked myself if I had really just seen what I thought I saw, but a quick glance at the digital display confirmed it. Lingering in the moment, my dark-haired playmate remained poised, as though I needed to keep shooting.

“No need. I think we got it,” I said.
“Of course you did, I’m a professional,” she said. “Lemmy see it.”
“Uh, well, OK, but you won’t be able to see much on this tiny screen.”
She could barely see my camera let alone the two or three other alcohol-induced phantoms dancing in front of her. Not noticing anything awry in the image, she nodded with approval.

“Yeah, that’s a good one. . . I wassin Playboy magazine ya know.”
By this time, my friend returned from the restroom, ordered another round to go, and started heading for the door. Just when I thought I’d make it out unscathed, my new lady friend grabbed a strap on my waders, pulled hard, and snapped it against my back.

“Goin’ fishing?” I could tell the gears in her head were turning all over again, albeit slowly. “I wanna go fishing. Tik me wif you.”
I was in panic mode. “What if I buy you a round, and you give me a rain check on fishing?”

“Make it two rounds and it’s a deal.”
I slapped ten bucks on the bar, grabbed my gin-to-go, and didn’t look back. That’s the first and only time I had to buy alcohol to convince someone to not go fishing with me.

Back on the river, there wasn’t much water to cover between the bar and our take out, so we barely fished. Instead, I shared the events that transpired while my friend was in the restroom, showing him the photo of the grinning groper. I made a few gratuitous casts but had more fun reliving the incident while the remaining drops of gin disappeared from my cup.

We trailered the boat but the tires barely made the switch from dirt to pavement when we decided to polish the day with a Moscow Mule—a potent Melrose Bar specialty of ginger beer, vodka, and limejuice served in a chilled copper cup. Ten minutes later, for the second time that day, we landed on two bar stools.

Sometime through the second round, a blinding white light blasted through the open front door, and by the time my eyes readjusted, the couple already flanked my left side and claimed the two remaining unoccupied seats.

I found myself once again seated next to the playmate and her groping counterpart. I smiled politely. She looked at me with a blank stare and struggled to place the familiar face gazing back. Then she saw my camera, smiled, and for a moment, I thought everything clicked.

Ben Romans is a writer in Boise, Idaho.