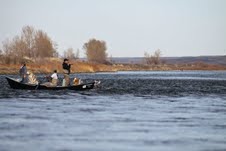 1. The OCD
The OCD boat gets washed at the end of every day, and is always trailered with a cover on. The OCD gets an even more thorough power-washing on days off. The OCD owner will frequently make clients stand around at the takeout ramp while he gives the boat “just a quick sponge bath.”
Stickers: Possibly one or two, but very carefully positioned using a protractor, with obvious concern for the overall layout.
Amenities: The OCD carries something for every conceivable situation: several camp chairs, two snake-bite kits, toilet paper, a Sven saw, flares, emergency blankets, a tarp, binocs for non-fishing partners, kindling, a lantern, feminine napkins, the book: “What to do When Struck by Lightning.” What you’ll Find Under the Rower’s Bench: Not a thing. Ever.
How Not to Start the Day: By getting in with muddy boots, tripping over the carefully coiled anchor line, and spilling your caramel soy latte.

2. The Vet
The Vet boat is easy to spot, as it will usually be made of aluminum and look like it’s been dragged to the river without a trailer. It will invariably have a lead anchor, which was probably pyramid-shaped and weighed 25 lbs. a decade ago, but now looks like a piece of split shot tied to a rope. Not that it really matters—The Vet never uses an anchor anyway.
Amenities: Cupholders from Quick-E Mart that hang on the gunnel. A couple pieces of scrap plywood that were laid down for floorboards. Stickers: River permit stickers dating back to ’85, and one “Eat, Drink & See Jerry” sticker from Buffalo, ’93.
What you’ll Find Under the Rower’s Bench: Several rusty, ragged carcasses of the only fly The Vet ever uses: the venerable Parachute Adams. Maxima scraps. An empty Falstaff (w/ pull tab). Chicken bones. Marlboro no-filters. Allman Brothers CD cover. Condoms.
How Not to Start the Day: By wondering out loud how many Grumman canoes died to make this boat.

3. The Special Ops
The Special Ops boat will invariably be a skiff, either in a very drab color or with some sort of camo scheme. No one is ever allowed to stand up while fishing in the Special Ops boat. Noise, and conversation in general, is frowned upon once underway.
Amenities: This isn’t about “amenities.”
Stickers: Stickers make you more visible to the fish.
What you’ll Find Under the Rower’s Bench: An empty tin of camo face paint. 8X spool. A 10” tactical knife.
How Not to Start the Day: By showing up in your bright orange Carribean casting shirt.

4. The Who Gives a Shit, This is My Last Season Anyway
Amenities: One broken, duct-taped folding chair for shore lunches that has to be shared on two-client days. A bag of chips that were already open when the day started.
Stickers: More stickers than a Vermont Subaru in a Western ski town, plastered haphazardly all over, none applied while sober.
What you’ll Find Under the Rower’s Bench: At least a 12-er of empty Coors cans, a couple roaches from this morning, a bra.
How Not to Start the Day: Doesn’t matter.

5. The Rafter
Recently made the transition from whitewater guiding and/or from working on some bony, dewatered trickle that you could never get a driftboat down.
Amenities: A K-pump and a loaner dry bag for the day.
Stickers: Numerous. Although most people refer to them as“patches.”
What you’ll Find Under the Rower’s Bench: Six inches of water.
How Not to Start the Day: By saying, “I thought we were going in a drift boat.”