Clyde may be of industrial-strength Detroit stock. But his love of nuclear northern winters is only lukewarm. Road salt gives him an itchy undercarriage rash. And all that ice fishing ain’t all that, unless it involves Great Lakes-size servings of Fireball. So having spent most of his winter vacay lurking in the Wisconsin Northwoods, it was time to top the tank and pump the pedal. Here, Drake intern-extraordinaire Elliott Adler steers the big-block boss on a course toward the Heartland, for Part I of Clyde’s Southern Revival Tour.

Retired Court Commissioner Tim Adler oversaw the departure of Clyde from the Northwoods that Clyde called home for the past 6 months. Adler demanded a 45-minute photo shoot before he allowed Clyde to leave. The elderly former civil servant remarked “Go make America great again” as the car slid through the intersection at the end of his driveway.

ILLINOIS
The first stop on Clyde’s Southern Revival Tour was Chicago Fly Fishing Outfitters. Stickers were slapped, photos were taken, Instas were grammed. A passerby took a selfie with the lead sled. Everyone was having a great time until Clyde hit rush hour traffic. 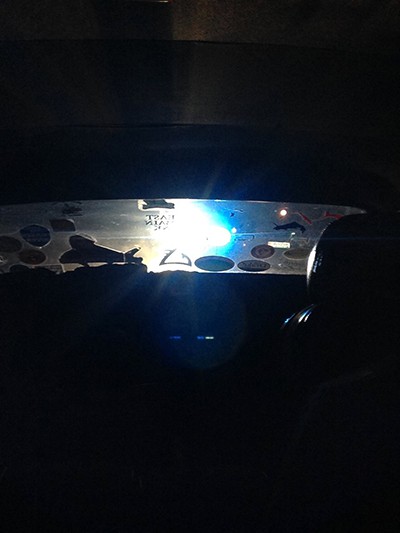 MICHIGAN
Clyde wound his way up the Lower Peninsula to the fabled steelhead waters of the Pere Marquette River. His celebrity preceded him and adoring middle-aged men swarmed him at the Green Cottage Boat Landing. A cop wasn’t sure what Clyde was doing that far out of his element. He let Clyde go and took a Drake sticker with him.

INDIANA
Clyde stopped for gas. That’s about it.

KENTUCKY
Clyde stopped off at Orvis in Louisville and made some friends who wrote about him in their newsletter: “Gas will be guzzled. Oil will be burned. Heads will turn.” He woke up in a Walmart parking lot and proceeded to eat off-brand cereal from a Styrofoam coffee cup with a spork. 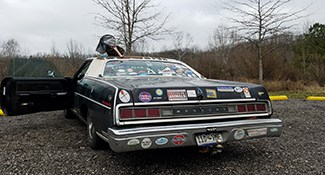 He slept at a trailhead that night. Rolling Rock kept him warm and wet.

TENNESSEE
Clyde heard about a way to make some easy money in McMinnville, Tennessee. All he had to do was take off his clothes and talk into a camera about muskie fishing. While he was there he ran into the guys at Towee Boats and got loaded.

His next stop was Maryville. It turns out there’s a time-zone divide smack dab in the middle of Tennessee. Clyde was hoping to make it to TU’s Little River Chapter’s January meeting by 7 p.m. The transition from Central to Eastern Time threw him off as he crossed the Cumberland Plateau, though he did manage to catch the final minutes of the presentation. Great Smoky Mountains National Park Fisheries Biologist Matt Kulp probably gave a riveting review of how the Gatlinburg fire has affected the parks fisheries.

Clyde handed out a few issues of The Drake to chapter members and ate some barbecue.

The folks at Smoky Mountain Angler peddled him some pink weenies and threw a sticker on the windshield. 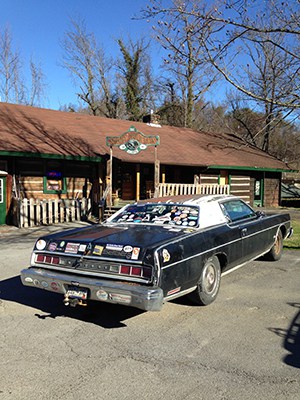 He spent a night in the Hiawassee National Forest. The closer he gets to Atlanta, the better the beer.

GEORGIA
Clyde was sipping his first decent cup of coffee in the hills outside of Chattanooga, Tennessee when he overheard the term “delayed harvest.” He hopped into second gear and tore down Signal Mountain, averaging 85 miles an hour as he ripped out of the city.

Delayed harvest is a program implemented throughout the Southeast during the cooler winter months. State Fish & Wildlife programs dump repurposed garbage trucks full of trout into designated streams on a weekly basis. The five classified streams in Georgia are catch-and-release until they open ’em to Power Baiters in May. Georgia lists its official reason for the delayed harvest program as “high angler satisfaction,” which easily translates to increased off-season tourist spending.

And bring in money it does. Clyde spent a total of $74.67 on a shoddy hotel room in Blue Ridge, Georgia (and that was with the AAA discount.) Two Coors Light silos and a large Hawaiian pizza from Pizza Hut pushed his total to near $100. Tack on $35 for a 3-day non-res fishing license plus trout stamp and he’s on the water. 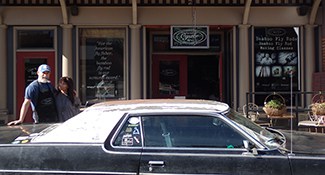 let him pop a squat in front of their downtown Blue Ridge shop. He rolled down the slight decline of the road before the parking brake stopped him at the door of Blue Ridge Fly Fishing. Each company marked their territory with a sticker. 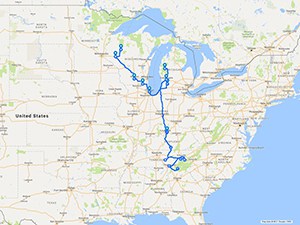 Clyde is now cruising through the mountains of Northern Georgia until The Fly Fishing Show in Atlanta this weekend. You might see him in the Catch Room teaching Bob Clouser how to effectively target bass.