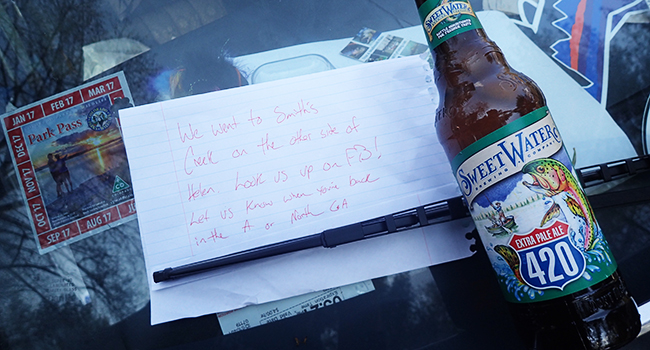 Clyde spent most of the morning rewiring his headlights with a splitting hangover. Eventually he made it out to the upper Toccoa River. He threw a stonefly pattern he found in the interior roof of the car. A few stocker rainbows took the bait.
Twenty feet from a trail leading back to the parking lot, Clyde stepped on an especially slick rock. Luckily the waterproof interior pocket of his waders managed to keep his iPhone 4 dry.

He stripped naked at the abandoned put-in and spread his clothes out to dry. Several passerbys gawked on their way to the cabin. He didn’t bother to cover himself up. 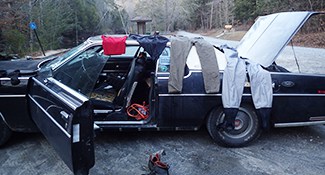 Clyde continued east through the Blue Ridge mountains. He stayed in second as he climbed and then skidded down the passes, or “gaps” as they call em down south. A state patroller tailed Clyde for five miles while running his license plates through dispatch. Good thing Tom Bie has a clean record.

Eventually Clyde made it to Smithgall Woods State Park where he had reservations to fish Duke’s Creek. It seems that the only way to ensure a stretch of stream is strictly catch-and-release in Georgia is to require tee times. A friend had pitched Duke’s Creek as an alternative to the high-dollar private fisheries in the area. Duke’s is free to the public, save for the required $5 parking permit. The park keeps pressure low by limiting the number of daily anglers to thirty. High fines and vigilant game wardens dissuade bait-tossing, fish-bonking yokels from poaching within the park. These limitation coupled with strict barbless, catch-and-release standards allow the fish the grow to gargantuan sizes.

Clyde showed up at the visitor’s center at 7:20 AM. He chatted with other hopeful fishermen who warned him to temper his expectations. It is generally understood that everyone has to “pay their dues to Duke’s.” Meaning, you’re probably going to get skunked, rookie. At 8 AM, Clyde hopped into a state-owned twelve passenger van with three other adventure-seekers. The park restricts road access to only official vehicles, bikes, and boots. The van dropped him off at the end of the park some four miles away. As Clyde walked upstream back to the parking lot he saw some monsters, but they saw him long before he could wet his line. Back at the car, he found a beer on his windshield from some friendly fisherfolk. Went down smooth. 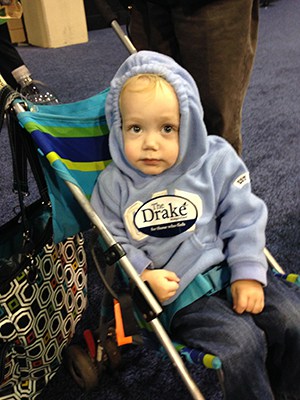 Clyde made his first celebrity appearance at The Fly Fishing Show’s newest venue, in Atlanta, last weekend. (Not this place.) Some said he was selling out, but all Clyde wanted was to snag a few stickers and have a fanboy or two lay across his big, metal behind. Both things happened. He also stayed in his first hotel that provided shampoo and conditioner. Though his hair is thinning, he still appreciates a good scrub.

After two rousing days of pitching subscriptions to southerners unfamiliar with the magazine, Clyde headed north to Drake country. The folks at Fly South in Nashville took good care of him. When it rained, they held covered him with clothing from their discount rack. When he complained of boredom, they put some fish-porn on for him in the movie theater. And when he said he was headed to fish in Northern Arkansas, they peddled him some big ole hunks of meat.

Clyde left rubber on the road in Kentucky, Illinois, and Missouri on his way to the Ozarks. Cheap gas and rumors of big fish kept him focused on Trump’s favorite river, The White.