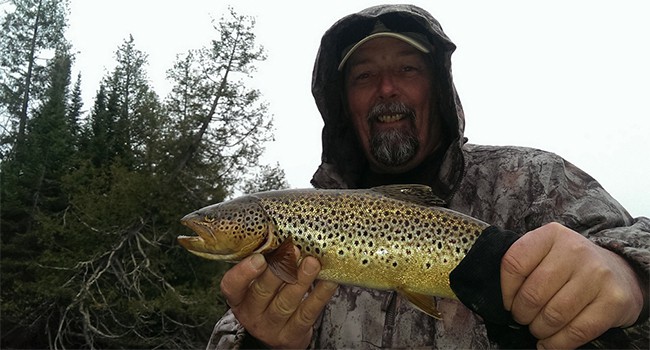 The growing pile of paper plates and gas station food wrappers on my car’s floor hint at my daily routine over the past couple weeks. Wake up at 6:30 a.m., 40-minute commute, 9-hour work day, 40-minute drive to go watch my son at either baseball, track, or golf, stay as long as I can, hit the river or lake, get home around midnight, put the boat away, shower, go to bed….

A lot of people really love late-May fishing, and it’s pretty good. But June is king. Brown drakes arrived a couple nights ago. Isos will come any day. Salmonflies and dark green drakes are going. The dragon nymph migration is at its peak. And oh yeah, sulphurs are hatching everywhere. Weather-wise, it’s that time of year when you drive to work with the heat blasting, drive to the river with the A/C on high, then bust the winter hat back out when you start seeing your breath after sunset.

There was a light cloud of brown drake spinners hovering high above the parking lot when we arrived at the river last night. I was fishing with my friend, Lloyd, a local mechanic I used to ride the bus with in high school. We hiked down to the river where we were enveloped by water from the waist down, and a Pink Floyd “Welcome to the Machine” swirling mass of bugs from the waist up. Several smaller fish rose on the inside of a long bend, but we left them alone, as the bigger fish usually don’t come out to play until the last hour of light and won’t come out at all if you mess with the little guys. A good fish rose after I lit a cigarette and I couldn’t help myself from half-heartedly roll-casting a sulphur over it. The fish ate. Another good fish rose 3-feet upstream of where the first fish was as I released it. Lloyd set up and after tweaking the drift got it to take but missed the hookset. At the same time, two solid fish rose up and downstream of us. Lloyd went after the lower and I want after the upper. A few drifts later I netted the first, then Lloyd missed the hookset on the second.

Lloyd missed another hookset a few minutes later, and all at once, the bugs disappeared and the fish stopped rising.

When we got back in the car, the display said it was 38-degrees. “No wonder I was so cold,” I said. I’ve had the same pair of waders for the last five years. A few pinhole leaks sprung last year, and then while taking my right leg out this spring, one of the seams came with it. I can’t afford new ones yet, but they’re still better than wet wading and do a good job keeping the mosquitoes at bay.

On the way home, we made a quick stop at a bridge going over the river to see what bugs were hatching. Bugs love bridges and it’s crazy how closely you can keep tabs on what’s going on just by bridge hopping. I walked underneath through tall dew-covered grass and spooked a newborn fawn as I was about to step on it. Only I didn’t realize what it was at first and screamed like a little girl as I jumped three feet backward, hitting my head on the bridge in the process.

I joined Lloyd in laughing at myself.