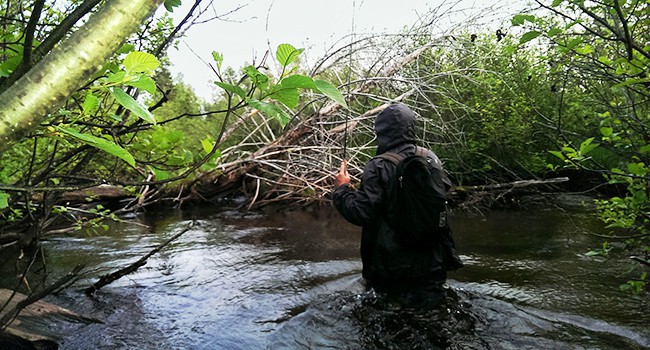 Ticks, carnival tricks, and plotting summer fishing in Michigan’s UP

Drift boats are great. But I still prefer hiking into the backcountry and exploring blue lines. Northern Michigan and the Upper Peninsula can still be classified as wild. And once you get north of M-55, you’ll find small stream nirvana.

After a month on the Au Sable, it’s good to retreat to these less-pressured waters. One stream in particular is my personal favorite and, in the spirit of Hemingway, we’ll call it the “upper Au Sable.”

Brook trout can grow big here. A few years ago I hooked one that ripped into the tailout of a long pool where Jason stood. He’d caught a 17-inch brookie a few days earlier and said my fish could have been several inches bigger. Ever since, I always check tippet for nicks after errant casts into the brush—and I haven’t fished bamboo since.

Jason might be the only person I’ve met who loves northern Michigan as much as I do. It’d been a long time since we fished this stretch together, but it seemed worth a shot. Tag alders reached from bank to bank, and provided perfect structure for busting out a modification of Joe Humphreys’ bow-and-arrow-rollcast. It’s a carnival style effort that’ll throw your fly out twenty to thirty feet through a thicket. A slow, short 5-weight with a fast-recovering tip is ideal for making it work. When it does, you can’t help but smile.

We took turns fishing upstream. Most of the fish that jumped during the fight hung themselves on alder branches swaying above the water. Those branches contained spider webs, including one so dense Jason’s leader clung to it during a cast without ever falling to the water. 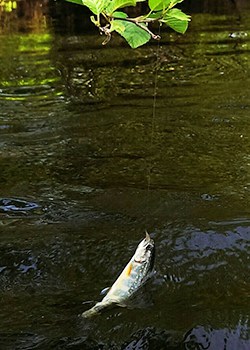 Most fish were small and beautifully colored. But Jason broke off a Dust Bunny eater in the mid-teens. The big ass ones always seem to eat that way here—they think they’re at the top of the food chain. I got a great look at its brindled olive back as it sharked perpendicular to the current to eat the fly. After losing it, Jason asked me if I told him to set… almost offended for being talked to like a sport.

“I don’t know, did I? I asked, sincere in not remembering. “It must be becoming a habit.”

We bushwhacked out in the dark. Spring peepers played in the background like elevator music. We talked about the fish Jason lost earlier, and then went back and forth with fish stories we’ve told each other hundreds of times. We planned at least a dozen future trips to places infested with Bigfoot and bears and wondered aloud how many ticks we’d picked up so far that night.