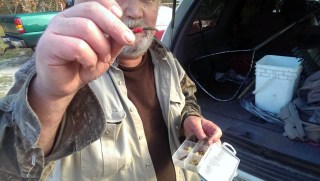 Chuck and Duck blogger Alex Cerveniak goes roadtripping steelhead-style this week. His mission: To fish tribs to all five Great Lakes, while cultivating epic facial hair, dining on gas station grub, and writing about all things along the way. Part II, from a barstool in Cecil Bay, MI, starts here. —Ed

As a fisherman, I’m inherently superstitious.

“Whatever you do, don’t get laid tomorrow or it’ll wipe out our beard mojo.”

“I’m serious. There’s nothing more unlucky than getting some ass the day before a trip.”

“They call it getting lucky for a reason, and you only get so much luck. If you use your luck up on a girl, I’ll know why the Catt gets blown out the day before we get there.”

“I thought you were a science major?”

I’m writing this from a small tavern near Cecil Bay at the tip of Michigan’s northern lower peninsula. Other than a couple guys at the bar giving me funny looks, I have the place to myself.

I skipped out of work a few hours early to hit a small Lake Michigan trib before meeting up with Jason later tonight. There were a couple old guys fishing at the base of a small dam near the parking lot. I tried making small talk before getting geared up, but they just nodded and went about their business.

While tying an intruder-style baitfish pattern, I realized they were taking turns fishing a single rod. One of them hooked and landed a chrome fish shortly after. A good sign as I wasn’t sure if there were fish in this stream right now or not. Photos were taken, and the fish—still in the net—was transported above the dam and released.

“They quit stocking this stream over 20 years ago, so I like to let ’em go above the dam to help ’em get to the spawning ground and preserve the fish of the future,” the old guy said, brandishing a proud smile.

I was tempted to remind him that steelhead spawn in the spring, but I let it go.

“Nice fish,” I said. “What’d you catch it on?” He showed me something that would make most tyers cringe. But it had a guide-fly vibe to it.

“Yeah, it’s one of my best patterns.”

They left after we checked out each other’s fly boxes—grandkids needed picking up from school soon. I fished down to the mouth and didn’t touch a fish. There were rotting salmon swimming around here and there, and the air smelled like death. 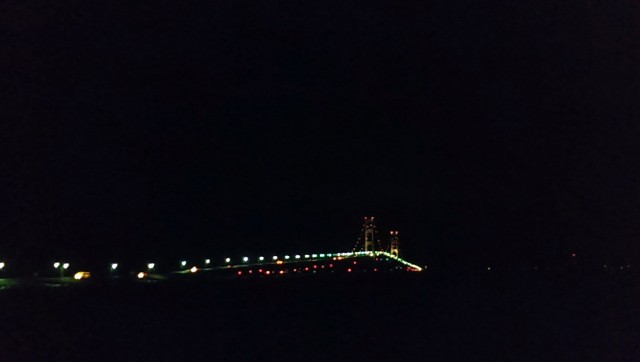 I waded out into the Straits of Mackinac from the mouth of the river and just stood there, staring out at the Upper Penninsula, while the waves lapped into my waist. The fact that I didn’t have to go back to the office for six days was starting to sink in, and it felt so right to be fishing.