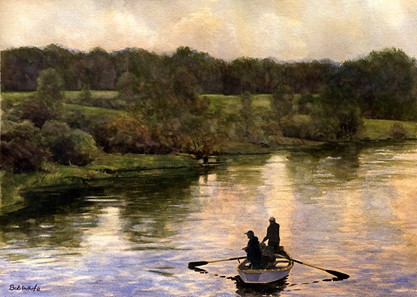 Ketamine, vision quests, and the answers we’re searching for… from artist and flyfisher Bob White

Two years ago I interviewed artist, writer, guide, husband, father, and all-around good dude, Bob White. If you read Scott Sadil’s piece in the Spring ’12 issue of The Drake you already know a little about Bob. But to this point, Bob is probably the most interesting person I’ve ever interviewed. I’m not sure why, but I’ve never really tried submitting that interview anywhere for publication—kind of like a fly tier purposely hanging on to his highest quality feathers. While going through a bunch of stuff I’ve written the other day, I came across that conversation and one answer really stuck with me. So without further ado, here is small sample from what I consider a super-grade jungle cock cape.

Alex: What did you want to be when you grew up?

Bob: When I was a kid most books about the outdoors, the hunting and fishing magazines, were illustrated with artwork. I enjoyed the stories, but it was the art that intrigued and transported me. These images resonated because they were so familiar and important, and as a kid I endeavored to paint the same kinds of things, the countryside where I roamed, and the animals, birds and fish I pursued. I wanted to be an artist. I wanted to be the guy who did the paintings in the books and magazines.

I studied art in college but at the time found no support for my realistic and representational style. In those days (the mid-’70s) an art student might stake an enormous canvas to the ground, behead half a dozen chickens and let them run around on it while they bled out. Then he’d ride back and forth across the composition on a dirt bike to communicate society’s collective rejection of nature. Of course, this gave the work a sense of “timelessness” and the creation was considered high art.

With little or no belief that I’d ever be able to support myself with my art and the growing realization that I enjoyed eating on a regular basis, I switched majors in the middle of my senior year and took a degree in counseling and social work. Upon graduating, I moved to Minneapolis and took a job as an individual and group counselor in a day treatment facility in South Minneapolis. After a few years in the trenches, I began to burn out. I stopped painting.

A Native American friend saw my inner turmoil and suggested I visit a certain Ogallala Sioux medicine man and seek advice. After listening to my dreams, the shaman, whose name was Cletus, told me I’d gone as far as I could in my present level of life, and that I’d never be happy unless I moved on to the next. To do this, he explained, I had to have a “give-away”; a ceremony in which I’d invite all of those people and spirits who were important to me, and thank them for their many gifts by giving them all of my possessions. Only by doing this, Cletus assured me, would I be free to move on to my new life. I was terrified.

Near the end of our time together, Cletus’ eyes hooded over and he said, “You have been given a name, ‘Hawk who looks the wrong way.’”

“Because, you have the ability to see with clarity at great distances… but you often look in the wrong direction.”

Months later, at the end of a particularly stressful day (in which I had to restrain a kid hopped up on horse tranquilizers) I decided to listen to my own advice about following one’s dreams, and I applied as a guide at a fishing lodge in Alaska, where a friend had worked the summer before. I fabricated a glowing resume that listed my “experiences” as a guide… and was hired.

When I resigned my position at the treatment facility, I was faced with the dilemma of what to do with everything I couldn’t take with me to Alaska, and it suddenly became apparent to me that I was meant to have my “give-away”. I’ve never felt as free and unencumbered as I did that spring night in
1984, when all I owned was what I could carry on my back.

I went to Alaska without any plans beyond the summer, and learned to guide on the fly. Near the end of that first season I had a couple of fishermen in my boat that owned a barge company on the Mississippi, and was offered a part-time job as a deckhand. The winter found me building tow in St. Louis harbor… one of the coldest and most dangerous things I’ve ever done. With a schedule of four days on, and four days off, I had enough time on my hands to paint again, and when I returned to the lodge the following spring I brought with me a collection of images from the summer before.

The owner of the lodge encouraged me to show my work to his guests, and by the end of that season, I’d sold the lot. Most importantly, by living frugally I was able to husband my funds and get through until the next season.

The following summer I was asked by the Fitzgerald family, who owned Frontiers International, if I’d be willing to travel to Argentina that winter and work with Patagonia Outfitters as a fishing guide and liaison… and I accepted. 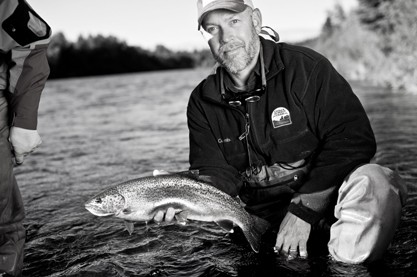 For many years my life took on a rather wonderful and carefree pattern; guide four months in Alaska, return to Minnesota and paint until the New Year, then travel to Argentina to guide for four months, and then back to Minnesota where I’d paint until I left again for Alaska. Guiding provided me with the time to paint in the off-season, and also gave me access to a group of collectors who appreciated my work, and most importantly, the sales allowed me to continue as a guide. The circle was completed.

If you had asked me, when I was twelve, what I wanted to be when I grew up, I would have told you about my life today… but I never really had a plan on how to get here. It just happened. This is a very meandering way of saying that I think I’m doing what I’m meant to do; that I am what I’m meant to be.