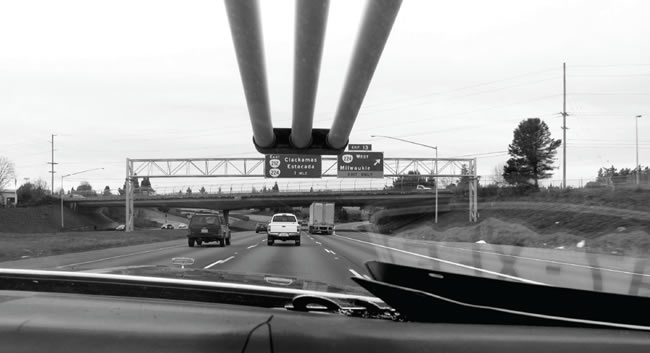 IN 1972 WALT “CLYDE” FRAZIER was holding down the New York Knicks’ backcourt with Earl “the Pearl” Monroe, and my dad came home one day to our suburban Connecticut home at the wheel of a shiny white Mercury Montego MX Brougham. Though it was classified a mid-size, the Montego, with its hood extending into next week, seemed huge to my-nine-year-old eyes. Other than that hood, and the fastidious detailing that my dad maintained, I have few memories of the car beyond the faux Calypso song “Montego Bay” (by Bobby Bloom), which was still getting AM radio play. When it came on, I imagined a sea of Mercurys like my dad’s, bobbing beneath a bright Jamaican sun. 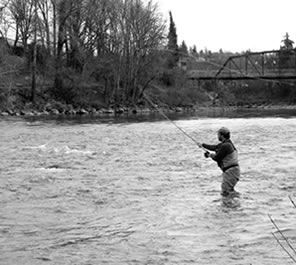 There was no music to accompany me on my maiden journey in Clyde, the Mercury Marquis (named after Drexler the Blazer, not Frazier the Knick), unless you count the fingernails-against-chalkboard rantings of Glenn Beck (the only channel I could pick up on Clyde’s AM band) and an incessant buzzing from the vicinity of the passenger door. (I suspect this may be related to the automatic window that doesn’t work on that side, though this was never confirmed.) Beyond the buzz, Clyde spoke to me in other ways. It aroused memories of my dad and his Mercury of a similar, if slightly shorter vintage. It compelled me to think of Walt Frazier—where did his nickname come from? (According to Wikipedia, it had to do with a hat he favored, which was similar to the one worn by Warren Beatty in Bonnie and Clyde.)

Given my upbringing in Norwalk—a rough suburb by Fairfield County standards, at least in the early ’70s—it seemed fitting that Clyde was spiriting me to one of Portland, Oregon’s grittier outposts, the proletarian netherworld between unincorporated Clackamas (of Mall shooting fame), Gladstone, and the northern reaches of Oregon City. Here, a mile or two upstream from the Willamette, rests a pretty sweet steelhead run on the Clackamas River that my coterie calls “Last Chance” or simply “the 205 Run,” as the Interstate is but several single speys away. There’s a riffle at the top of the run, a long section of flats, and then a bend where the river broadens into a wide, deep pool. There’s a bluff across the way with a road and houses, and from the upper parts of the run, the highway is in view. At certain water levels, the whole run—a quarter mile at least—swings decently. The top and the bottom almost always fish, if you can find enough room to swing a fly. Gear guys think nothing of stepping 30 or 40 feet in front of you and casting over your fly line as your leech swings 30 feet below them. I’ve watched younger fly anglers chide the old-timers who step in on them. The old-timers’ typical response is to cock their head, shrug their shoulders, and cast again. “If someone steps in on a flyfisherman on the Deschutes, that’s one thing,” a senior spin fisherman shared one day. “This is the Clackamas.”

There’s a parking area just above the run, presumably for the paved walking path that parallels the river. The lot is usually festooned with broken glass; Last Chance seems a favorite run for methheads as well as metalheads. There’s a strip of woods between the path and the river. At times, I’ve encountered small encampments of weathered men among the hardwoods. They don’t seem to appreciate the early morning demands of steelheading.

There are two reasons that anglers will brave the potential for smashed windows, the occasional hobo jungle, and the general absence of etiquette found at Last Chance. Fresh steelhead— including some outsize natives—appear in the Clackamas from December through July. And on light traffic days, the run is less than 30 minutes from downtown Portland. It’s quite common for my cohorts to hit the Clack for an hour or two at daybreak, exchange their fleece leggings for khakis in the parking lot, and make their first meeting by 8:30 or 9:00.

By the time I pulled into the parking area on a late February morning, Clyde had already proven a rather insatiable companion, craving both ampage (in the shape of a jump start from my Subaru) and fluids (he began gushing antifreeze as I shifted him into Park). His steelhead hunger, however, would go unsatisfied.

This particular morning, the crowds were thin—low, clear water had discouraged all but the diehard or foolhardy. There weren’t even any campers in the woods as I made my way to the river, though it was a dry, balmy, fifty-degree day. Two fishermen with floats and corkies were midway down the run, so I worked the upper half, beginning in the riffle. I never go winter steelheading expecting to catch fish, and on this morning, my expectations were met. But I saw a redtail clutching a small, unidentifiable bird in its talons as my pink leech swung across the current. Several hummingbirds hovered downstream, which I chose to interpret as a harbinger of better days to come. The highway traffic was barely audible, and the sun eventually broke through the clouds. The 205 Run would not be easily confused with the Sustut or the Dean, but it’s testament to a living, even thriving river; it’s much closer to Portland’s infamous Voodoo Donuts; and when the early summer fish begin mixing with the late winter arrivals a month hence, my expectations ratchet up from nil to a solid maybe.

Clyde’s windows had been spared any ill will, and after a moment’s hesitation, he turned over with a roar. More than a whiff of white smoke in his exhaust hinted at an ailing water pump or head gasket leak, but nothing would slow Clyde down this day as he eased onto I-205 north, heading toward breakfast, home, and spring.