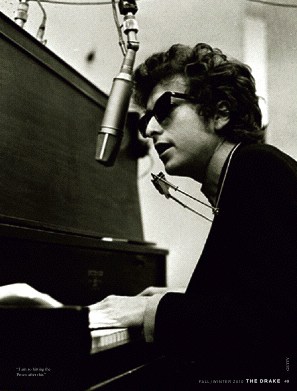 There is no photographic evidence of Robert Zimmerman stepping out of a river bearing a brace of trout, boots of Spanish leather glistening; nor are there secondhand tales of a small mumbling man with a bewildering patter and a decent roll cast, tales shared by grizzled guides after too much bourbon, and only with trusted clients.

No. There are only the songs themselves.

As you will soon see, a close scrutiny of the music of Bob Dylan will reveal the passion of Bob Dylan—namely, fishing. Specifically, trout fishing. Especially in the years 1967 to 1976.

“Yea Heavy and a Bottle of Bread”

Recorded in 1967 with the musicians that would come to be known the following year as The Band, “Yea Heavy and a Bottle of Bread” marks Dylan’s first unabashed declaration of piscine passion:

It’s a one-track town, just brown, and a breeze, too, Pack up the meat, sweet, we’re headin’ out For Wichita in a pile of fruit. Get the loot, don’t be slow, we’re gonna catch a trout

There’s no refuting the narrator’s (Dylan’s) desire to “catch a trout” (repeated three times). No wild trout fisheries exist in greater Wichita, nor are there any rivers that boast trout. Thus, it can be deduced that the artist is comfortable both with stillwater fisheries and stocked fish. The unidentified lake in this case is likely Kansas Department of Transportation East Lake. Some will point out that KDOT East Lake is primarily a baitfishery, calling into question Dylan’s commitment to fly angling. However, with “get the loot,” the narrator slyly alludes to the high cost of fly tackle—especially in a time before inexpensive graphite blanks from China and Korea.

Coming on the heels of the universally panned “Self Portrait” (a record of mostly cover songs), 1970’s “New Morning” marks Dylan’s return to singing his own compositions. More significantly, it provides the most pointed evidence to date of the Bard of Hibbings’ off-stage obsession. First, there’s “Time Passes Slowly”:

Mountains plus wild fishes plus stream unequivocally equals trout. Dylan obviously appreciates the contemplative qualities of angling, an idyll that propels him to a dream state. (Note: The “floating fish” above are slightly troubling—are they an allusion to the PCBs that tainted many northeastern streams through the 1960s and ’70s?) Time Passes Slowly” is followed a few tracks later by “Sign on the Window”:

Here, trout fishing is not merely a pastime. It’s interwoven with the very fabric of the narrator’s country life, just after his spouse and ahead of children. Trout are part of the answer to life’s questions, “what it’s all about” in the parlance of the day. (It’s not hard to imagine Dylan catching hell from then wife Sara for missing the birth of one of those many kids, thanks to a hatch that was simply too prolific to abandon.) The location of the “cabin in Utah” has been a point of sometimes violent debate among Dylan scholars. One camp contends that said cabin is on the Provo, close to Salt Lake, the center of Mormonism; they reason that Dylan shows an affinity for the faith (the narrator’s desire to “have a bunch of kids”). Others feel the fishery in question is the Green, simply because the fishing is generally better.

Dylan’s last overt fly angling allusion comes in “Hurricane” from the 1976 release Desire. “Hurricane” marks Dylan’s return to protest music as he sings of the plight of Rubin “Hurricane” Carter, a boxer convicted (perhaps wrongfully) of a triple murder:

Rubin could take a man out with just one punch But he never did like to talk about it all that much. It’s my work, he’d say, and I do it for pay And when it’s over I’d just as soon go on my way Up to some paradise Where the trout streams flow and the air is nice…

Critics have pointed out that, given Carter’s inner-city upbringing and penchant for pugilism, a trout stream would not be the first place you’d expect to find him outside the ring. They miss the point. Dylan is projecting his desires onto Carter, imagining himself stepping off the smoke-filled tour bus to make a few casts where “the air is nice.”

Who can blame him?

Chris Santella first remembers hearing Bob Dylan in 1978. The experience inspired him to sing in public without shame. Today, he fronts Catch & Release—a four-piece band out of Portland, Oregon.