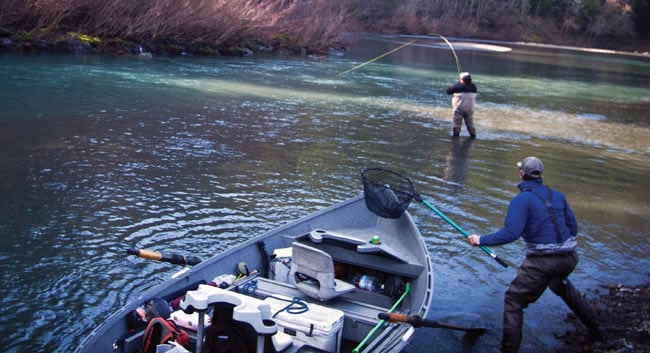 HUDDLED IN THE CRAMPED HOTEL ROOM, I peer down at the creamer label and see that it and the sugar are both produced by the same Texas chemical company. Looking around, it’s hard to believe that they’ve actually fit two queen beds in here. Every inch of open space is filled with duffel bags, rod tubes, waders, boots, and beer bottles. There are wet garments draped everywhere.

My friend Luc and I had finished a three-day steelheading trip the previous afternoon, and it had rained hard the last few hours before the takeout. With tired and aching muscles we emptied the drift boat, loaded it onto the trailer, and piled into the truck for the ride back to our car. I fell asleep in the backseat amid the smell of wet wool and the steady drumming of rain on the roof.

Clichés seem unavoidable in steelheading. From “the fish of a thousand casts” to “the tug is the drug” their sheer repetitiveness makes them suspect. Could it really be as great as all that? Nevertheless, there is a relentless urge to give it a try. And so I found myself driving north through the Central Valley of California in the dark and the fog to at least attempt it, “just this once.”

Luc is an old hand at the hunt for sea-run chrome—the long drives, the hours on the water, the highs and the lows. He prepares me with a mixture of casting advice and tales of big fish, along with caution about being too optimistic. “There is a very real chance,” he tells me, “of casting from dawn til dark for three days without even feeling a fish.”

It’s hard to pin down any one emotion amidst this barrage of information. Elisabeth Kübler-Ross came up with a model commonly called the “five stages of grief,” and at times I feel like I’m experiencing them. Denial: I fish for trout at least 50 days a year, of course I’ll be successful! Anger: I better catch a fish in three days or I’m going to be pissed. Bargaining: It’s three days; all I’m asking for is a single fish. I’ll be happy with just one, really I will. Depression: This sucks. I have three midweek days off and I could be on a local tailwater catching big browns in warm temps. Why am I even here? Acceptance: Ok, I can do this. It doesn’t matter how it turns out, it’s the experience that matters.

The biggest thrill for me did not come from catching my first steelhead (yes, I got a couple), but rather from watching the monster that Luc hooked as it broke free of the water. I saw it first from the corner of my eye as I stood on shore watching the fight. I can still see it in my mind as it leaps and turns in midair, water droplets flying and time standing still.

Back in the hotel room I part the curtain and look out at the 18-wheelers rolling down the highway, rushing to get anywhere but here. The night before we’d made a white-knuckle drive over a snow-covered pass, then changed out of our wet waders and jackets in the restroom of a Quiznos. Then several more hours in a driving rain until exhaustion led us to this fleabag for the night.

So this is what steelhead addiction looks like. I dump in the chemicals and drink the coffee.

Jon Heaton dreams of flyfishing while teaching college in the shadow of the Sierra Nevada mountains. His favorite outdoors writer is Patrick F. McManus. 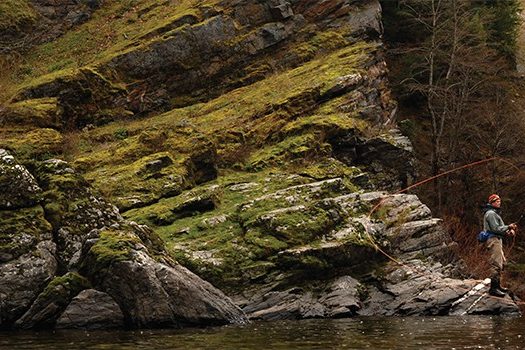