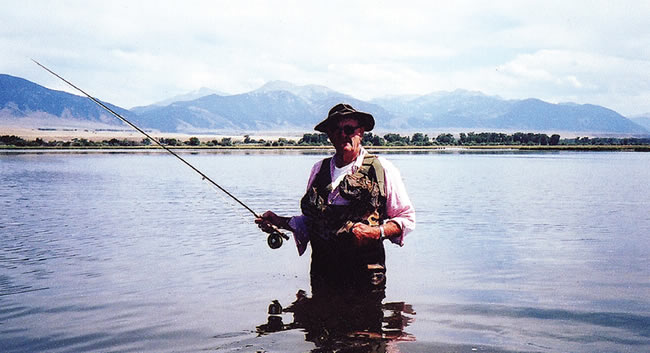 DICK MCGUIRE DIED as we fishers should hope to die—fishing his home water. At 82 years of age in 2007, McGuire launched his boat on Ennis Lake and never came home. They found him the next day floating face down. The coroner didn’t perform an autopsy, so we don’t know exactly what caused his death, but it doesn’t matter anyway. What matters is what made him live.

Wild trout and those of us who fish for them are forever indebted to McGuire, for he played an instrumental role in the paradigm shift away from hatchery-produced specimens. As a Madison River fishing guide in the early ’70s, McGuire shared a conviction with a young fisheries biologist and manager named Dick Vincent that stocking hatchery-raised trout in the Madison River was harming wild fish. To the greater fishing community, the notion that stopping hatchery-fish stockings would somehow increase fish numbers and fish size was illogical.

Fortunately, an evolving technology called electroshocking was making it possible to count and measure fish and scientifically prove McGuire and Vincent’s theory. Vincent would perform the science, and McGuire would perform the herculean task of convincing fellow fishing guides and anglers that the no-stocking experiments should proceed. Vincent says that McGuire’s support and encouragement, along with that of Bob Morgan, was critical to the successful evolution of the Madison River from an ailing put-and-take fishery to a healthy, robust wild trout fishery. McGuire’s roles as head of the local Trout Unlimited chapter and as a respected Madison fishing guide helped him spread the word and convince folks that wild is best.

After the plantings were halted, the Madison’s wild fish grew bigger and more numerous. The no-planting strategy combined with catch-and-release regulations were a resounding success that still reverberates throughout the West and has forever altered the way fish-and-game professionals manage river fisheries.

McGuire was the most beautiful fly caster I’ve ever seen. One day on the Missouri below Holter Dam, I sat for 30 minutes on the bank and watched him cast and swing a large streamer through a riffle as if he were steelheading. It was beautiful. All day long he conceded the best water to my father and me, and as we pulled out at dark, white mayflies swarmed us like snowflakes in a blizzard.

McGuire was a large man with massive hands. He played basketball for Montana Western in Dillon and served in the military. Variously, throughout his life, he taught math to high schoolers, guided fishing and hunting, dabbled in development, and he and Aslaug, his Norwegian wife/partner, bred and raised Fjord horses. Most of all, he loved to fish Ennis Lake.

In his later years, McGuire avoided the Madison River’s crowds and found solitude on Ennis, where he could catch 18- to 20-inch browns and rainbows. He sometimes used a ladder like anglers at Nevada’s Pyramid Lake.

I remember McGuire whenever I hook a wild fish on the Madison, and I hope to pass from this life while fishing, as he did. This past winter, the Madison River Foundation set up a conservation fund in McGuire’s name that they will use to study the impact on wild fish from the hatchery fish that are still being planted in Hebgen Lake. Dick McGuire’s wild-fish legacy lives on.