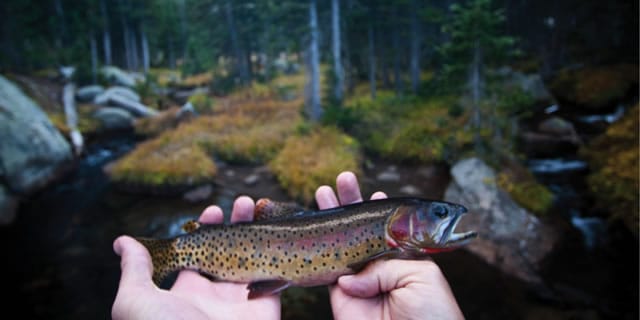 “Perhaps the rebuilding of body and spirit is the greatest service derivable from our forests, for of what worth are material things if we lose the character and quality of people that are the soul of America?”

Arthur Carhart—widely regarded as a pioneer in wilderness protection—posed that question more than 90 years ago after a short visit to Colorado’s Flat Tops Wilderness Area in the White River National Forest.

This summer, standing in the same national forest as Carhart, contemplating the small waterways that call this area home, it was easy to understand where his revolutionary thinking originated. Colorado Roadless Areas (RAs) are underdeveloped locations in national forests that do not have authorized Forest Service roads. These RAs hold some of the most remote fishing in Colorado, as well as being home to a disproportionate amount of habitat for native cutthroat trout.

Arthur Carhart grasped the concept of wilderness early in his career. Based on historical accounts, that spark of conservational thinking and advocacy for our forests was first ignited in the aspen and lodgepole stands not far from the Bunker Basin and Pagoda Peak Roadless Areas, in Northwest Colorado.

Carhart was sent as a US Forest Service official to oversee and engineer a road around Trappers Lake, which sits just south of Steamboat Springs, between Meeker and Yampa. In addition to a road, Carhart’s mission was to return to Denver with an engineering plan for cabins that would surround the lake. The wilderness he was surveying is stunning and remote, but Trappers is also a major headwater source for the White River, which runs west through Colorado before meeting the Green River in Utah.

During the survey process, Carhart was approached by Paul J. Rainey, a local outfitter and outdoorsmen who ran a hunting camp nearby. Rainey did not mince words about his thoughts on Carhart’s intentions.

“Can’t you bureaucrats keep just one superb mountain lake as God made it?” said Rainey. “Do you have to circle every lake with a road?”

The exchange had its desired affect. Instead of returning to his superiors with a road design and plans for cabins, Carhart made a radical presentation and departure from conventional thinking at the time: leave the lake be—no road, no cabins. Ever. Carhart’s bosses accepted his proposal. Trappers Lake and the Roadless Areas that surround it look the same today as they did when Carhart first laid eyes on it. The protection of Trappers was the first of its kind for the Forest Service, which is why many people consider Carhart’s decision to be the beginning of the Forest Service’s Wilderness Area program.

Many Colorado Roadless Areas hold the headwaters of the biggest and most popular rivers for flyfishers: the South Platte, Arkansas, Yampa, Taylor, and Gunnison all begin in Roadless Areas. The White River National Forest, and some of the RAs that exist within its borders, is also home to one of the largest elk herds in the world—estimated to fluctuate between 38,000-50,000 animals.

“There needs to be a sense of mystery and exploration in fishing,” says Aaron Kindle, who works for Trout Unlimited on the Sportsmen’s Conservation Project. “I’m not sure how much people get that anymore. I run into a fair share of fly anglers who don’t seem to care or even want to learn about Roadless Areas.”

We care. So we went exploring. There are a number of stunning RAs in the area where Carhart first evaluated the forests and water sources. We checked out two of them—Bunker Basin and Pagoda Peak. Bunker Basin sprawls across 12,800 acres and feeds the Yampa River. Just west of Bunker, feeding the Yampa and the White Rivers, Pagoda Peak RA covers a massive 57,700 acres.

As we approached the first creek, after a dusty 25-minute hike on a well-traveled game trail, the water was small but flowing cold and clear. If the fish were here, they would be easy to find and hopefully hungry after a far-below-average runoff in the Rockies.

The mystique of these fish isn’t about the bend in your rod. And the challenge isn’t necessarily about tricking your quarry with a new fly. What’s impressive about the Colorado River Cutthroat is that it exists at all. Once prevalent in both the Green and Colorado River watersheds, the range of these fish has been reduced to an estimated 13 percent of their original habitat. Seventy six percent of that reduced habitat is located in these types of secluded roadless areas. Overfishing, along with the introduction of non-native species like brown, rainbow, and brook trout have nearly eradicated the Colorado River cutt.

The biggest threat to the Bunker Basin and Pagoda Peak RA is the potential for extensive oil and gas exploration and extraction. There are currently four active oil and gas leases in the Bunker Basin RA, and one lease in the Pagoda Peak RA. All of these leases were issued prior to the 2001 Roadless Rule but none of them are currently operational. To get an understanding of how close these RAs are to other oil and gas operations, consider that just 60 miles west, in the White River basin, lies some of the most densely populated oil and gas extraction activity in the country.

North Americans face a paradox. We’re driven by the urge to grow and expand and prove to the world that we are not dependent on foreign oil. Yet, when we need a break from the hustle of big business and the daily grind, we yearn to get away to the lake, beach, or backcountry area.

Ultimately, we need to ask the question that Arthur Carhart asked almost 100 years ago: What is our character, and what are we willing to protect?