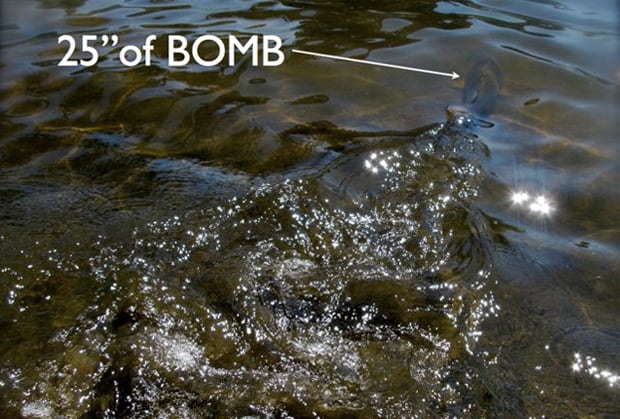 I smelled the tinge of burning gun powder and knew exactly what was going on. I didn’t even have to look. There was a F250 right in front of me so I ran around the hood, ducked for cover and set my beer down on the parking lot macadam. A few minutes before Scott Wells had tried to stick a bottle rocket in my back pocket but my Spidey senses were dialed in and I thwarted the practical joke. Tim Romano wasn’t so keen. The bottle rock hissed and the group of 20 or so anglers all jumped and ran for cover. The projectile hit someone in the back and discharged under another truck. Everyone was laughing except for the photographer who’s pants were still smoking.

And with that final celebratory display of pageantry, so came the finale of another Denver South Platte Carp Slam. It was a doozy.

The unofficial events kicked off the Thursday prior. We welcomed the out-of-towners with reception at a local tavern. Alex Landeen was stoked because earlier in the day he had finally popped his DSP carp cherry. Bruce Smithhammer from rural Idaho was psyched because well… they let him out of rural Idaho. We also arranged for the 2010 pro/am winners to join us and bring their coveted carp cups for one final drink as reigning champions. 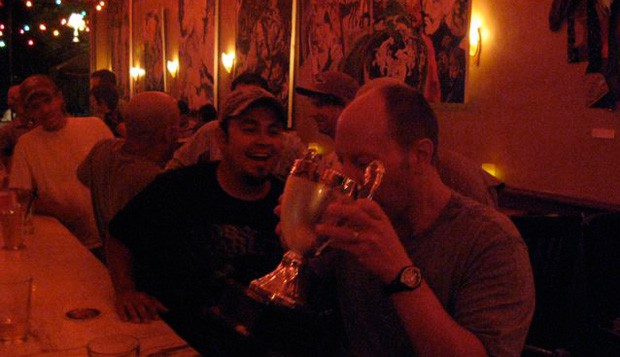 When I pointed out the statistically unlikelihood that David Luna and Phil Beranato would be sitting in this same bar a year from now with the 2011 cups, I got the south side stare down. 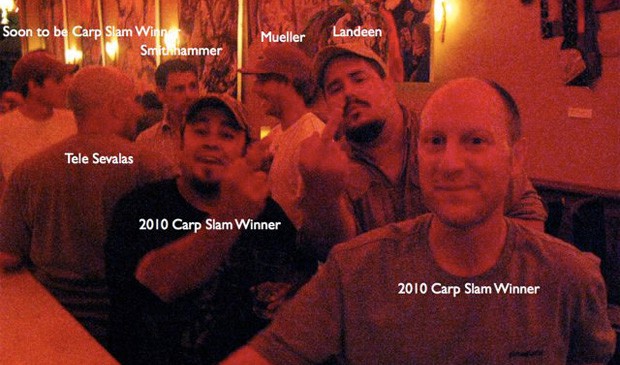 The shXt talking commenced almost immediately. I believe I predicted that my team would win the tournament and ventured that I would land 9 carp.

“How many carp have you ever caught on a single day on the South Platte?” asked Smithammer.

The night prior to the event we picked our pros. I was the first to go and was pretty happy to pick local carp slayer Tyler Kendrick. Tyler won the open event last year with Luna and has a reputation as a fishy kid. Our two beats were well known to us and I was feeling pretty good about our prospects. I had caught fish in both sections somewhat recently and the water had been steady for number of days… until that next morning.

The water bumped from 82 CFS to 155 the night before we fished. At 8:30am it was down to 50 and an hour later it bumped back to 99. This type of fluctuation puts enough color in the water to make tough carp fishing even tougher. We struggled throughout the morning. I had one legit shot and I basically lined the fish. Tyler pulled a rabbit out of the hat and walked-the-walk with about 20 minutes to go in the last session. At least we were on the books – further than I had made it in any of the two previous Carp Slam events. 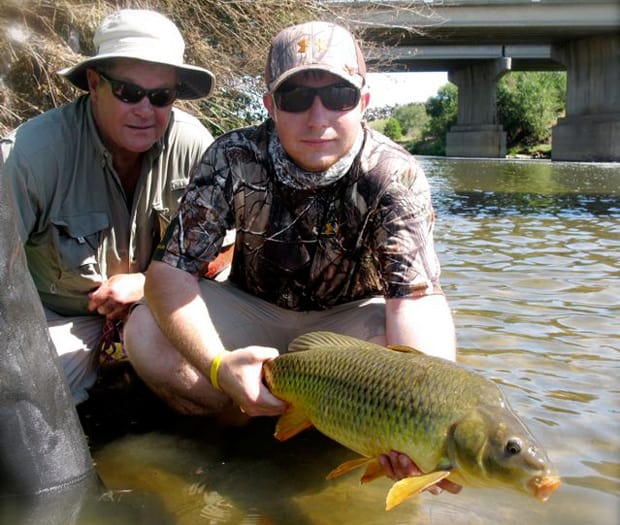 We got on our second beat in the afternoon. Smithhammer had fished this same section in the morning and gave a paltry report over lunch. I had walked a long stretch of this section a few weeks before and the fish count was light. About 10 days before the slam I had run into a pack of spear fisherman who were using seine nets. I dubbed them the “spear net gang.” It actually scared the shXt out of me when I first came across them – I felt like I was in Mad Max or something. I wasn’t sure what the regulations were so I called the DOW that night. They confirmed that spear fishing was legit but the net was a no-go. They told me if I saw the net again to call them immediately.

We walked a half mile stretch of river and didn’t see a single fish. I had caught my first mirror in this same section earlier this summer. We would regularly see packs of cruising fish in this skinny part of the river. I was starting to correlate the events in my head. Spear net gang… fish are disappearing. I had just finished telling Tyler my “Welcome to the Thunderdome” experience as we were scanning for fish from a cement abutment when guess who comes walking up – spear net gang dude – 9′ spear and all. 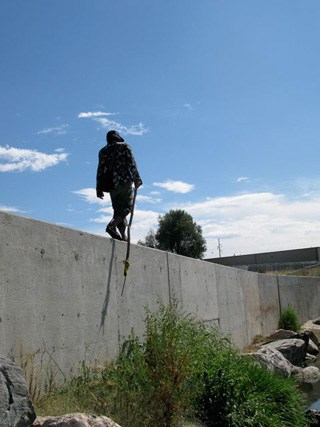 We continued to fish and this guy’s buddies show up with the seine net. They literally started to unfurl the net and sharpen their spear blades on the cement as we sat and cast at fish. No joke. It was freaky. We decided to split. These guys were waiting with baited breath and I knew those same fish would be dead in less than an hour.

The DOW officers showed up about 25 minutes after we called. I’m not sure if these guys got busted or tickets but they certainly found out the rules and regulations of the river. We continued further up the beat. Tyler had one amazing 50 foot cast to a single tailing in the middle of the river. The fish ate – Tyler set – and the fish spit the hook. Welcome to the heart break hotel. It was one of the best presentations I’ve seen in a long, long time.

Later that evening after the impromptu fireworks display, we all made it down to Confluence Park for a kick ass after party. It wasn’t until later in the evening when we heard the official results. Trevor “McTage” Tanner and Clint Paco brought home the bacon – 5 fish landed totaling 111″ total. 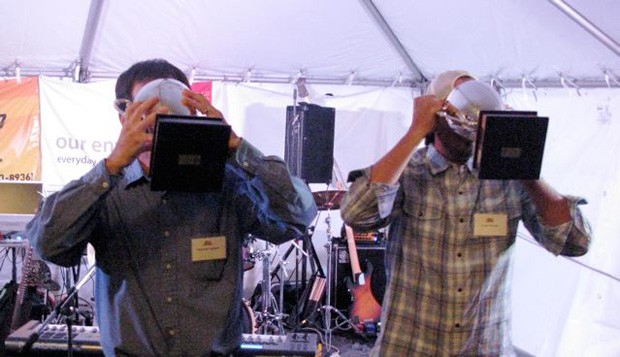 Sixteen carp came to hand over the course of the day as well as numerous smallmouth, rainbow trout, and other not-so-media-friendly-species. The guys at DTU completely raised the bar this year – as did all of the sponsors. The event went smooth and the money raised to help rehabilitate the our home water was record setting. In all, over $30,0000 was raised by competitors, their fund raising efforts and tickets sold to the after party. Tim “I-got-a-bottle-rocket-in-my-pants-Romano” himself raised $1451 for the cause and won the top fund raising award – a print made by Mr. Scott Wells himself. Sweet justice. 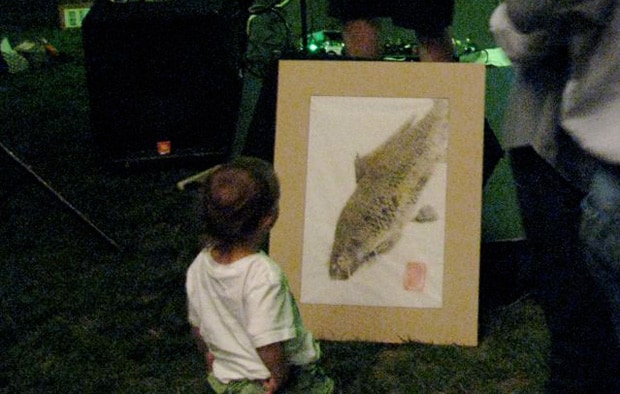 For a more official Carp Slam V report you can visit:
http://www.carpslam.org/2011/08/29/carp-slam-v-winners-are-trevor-tanner-and-clint-packo-with-the-mctage-trouser-worm/