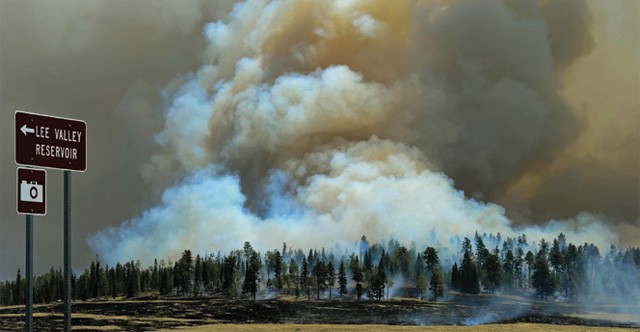 Sunday, May 29, 2011 began as an ordinary day in the White Mountains of eastern Arizona. Memorial Day weekend draws large crowds from hot deserts to the high country to camp and fish. But at approximately 2 p.m. that afternoon, smoke began to rise from an abandoned campfire in the Bear Wallow Wilderness Area on the Apache-Sitgreaves National Forest, about 15 miles southwest of Alpine. Windy conditions and rugged terrain kept local Forest Service Initial Attack crews from containing what would blow up to become the largest wildland fire ever recorded in Arizona.

The Wallow Fire, pushed by high southwest winds, burned for 46 days and consumed 538,049 acres. The iconic Escudilla Mountain that Aldo Leopold referred to in his essay “Thinking like a Mountain” was left a moonscape and the towns of Alpine, Nutrioso, Eagar, Springerville, and Greer were evacuated in front of the advancing flames. Thirty-two residences and four commercial properties were destroyed. The cost of fighting the Wallow Fire was $109 million. Although no human lives were lost, some of Arizona’s finest trout fisheries were wiped out.

Of particular concern are the native Apache Trout, found only in the White Mountains and neighboring tributaries. Although Apache trout were federally listed as endangered in 1969, aggressive conservation measures initiated by the Apache Trout Recovery Program have allowed the fish to be downlisted to threatened. “We don’t expect the effects of the fire to have a negative impact on the genetics of the recovery program,” said Arizona Game and Fish Department fisheries specialist Kelly Meyer. “That said, streams in the intensely burned areas are not going to fare well, and if we lose these populations, we may lose four to six years on the recovery. We’re expecting to lose fish populations from ash flows on the East Fork of the Black River, and trout from Fish, Double Cienega, and Cordury Creek will also likely be lost. The challenge for fisheries managers is to be persistent.”

The East and West Forks of the Black River are popular with flyfishers and are two of the streams the state has focussed on for its Apache recovery efforts. Unfortunately, unlike the Rodeo-Chediski Fire of 2002, which burned farther downstream in the Black’s watershed, the Wallow burned high up in the Black, Blue, and Little Colorado drainages, meaning there could be more of an impact on trout. As of August, the Black River remained closed to fishing.

Mike McLaughlin, a third generation Arizonan, has flyfished the White Mountains his whole life, and his parents own property in Nutrioso. The home survived the fire; most of the surrounding forest did not. “Busloads of crews were at my folks’ place removing debris from drainages,” said McLaughlin. “It looks like we will lose all the fish in Nutrioso Creek and others where the fire was the worst, but most of the lakes are going to be fine. There are still plenty of fishing opportunities in the White Mountains, and hard-hit areas will recover.”

In late summer, Meyer reported excellent fishing at Big and Crescent Lakes on the forest, and at Sunrise Lake on the White Mountain Apache Reservation. Fishing at Reservation and Hawley Lakes on the Apache Reservation stayed good because firefighters were largely able to keep the Wallow Fire from burning on the tribe’s land. Wild, stream-bred Apache trout fishing remains strong on the West Fork of the Little Colorado near Sheep Crossing. “It’s only going to get better above the beaver ponds on Mount Baldy,” said Meyer.

Much of the Apache side of the Apache-Sitgreaves National Forest remains closed, but access has been restored to many good waters. Anglers heading to the White Mountains this fall should visit www.fs.usda.gov/asnf/ for a list of the most recent actions.

—Bill Watt is a former fisheries biologist and was a wildland firefighter with the Arizona State Forestry Division.