The Disappearance of Stanley Bain 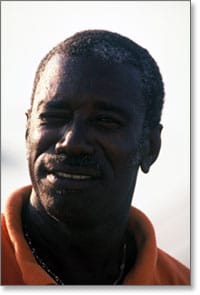 “There was no evidence to show they’d been around. There were no boats, no wreckage. There was nothing.” – Henry Bain. Andros Island, Bahamas

On the morning of August 5, 1995, Stanley Bain stood in front of his Cargill Creek Lodge and surveyed the small flyfishing empire that he’d built. The resort sat near the North Bight on South Andros Island, The Bahamas, concealed among lush tropical gardens and manicured lawns. Three satellite cottages peppered the outskirts of his property, which included an in-ground swimming pool and a Cessna 402 for his more affluent clients who wished to arrive via private charter. And surrounding it all were some of the most productive bonefishing waters in the world.

Stanley was preparing for a two-week fishing trip to harvest lobsters for the coming year’s clients. A recent hurricane had just passed and he and his brother William were getting a late start on opening season. But soon after fueling up the 36-foot Luhrs Sport Fisherman and two Dolphin skiffs that would accompany them, Stanley, William, and three lodge employees set out into the emerald waters surrounding Andros. As they headed away from Cargill Creek, the group passed Simon Bain, another of Stanley’s brothers, who was returning with a client from the North Bight and Moxey Creek after a morning chasing big bonefish. Simon ran his boat close in front of his older brother’s cabin cruiser, and he can still remember his two brothers laughing as he passed. It was the last time he would ever see them. Stanley Bain and his crew of four disappeared that day forever.