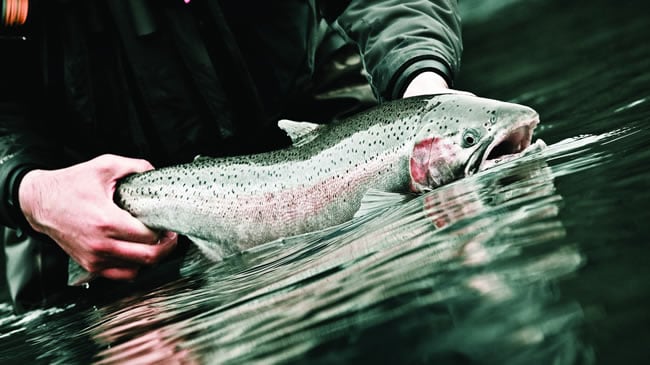 When natural flows return, so do the steelhead

Across the continent, 2012 was a bad year to be a climate- change skeptic, but a much worse year to be a fish. Before you bid a tepid au revoir to this torrid 12 months, consider: According to 350.org founder and climate raconteur Bill McKibben, June broke 2,132 high-temperature records across the country. May was the warmest month on record for the northern hemisphere. That was also the 327th consecutive month in which the temperature of the entire globe exceeded the 20th century average. Like anecdotes better than statistics? Recall certain South Dakotans who enjoyed a 90- degree day in mid-February. The fundamentalist Christian faction in Colorado Springs may have a more accurate vision of hell after living through the fires there last spring. Hurricane Sandy made Manhattan look like The Day After Tomorrow. Welcome to the new climate reality.

The mid-section of the country, and in particular its rivers, took a vicious beating in the heat. On the Des Moines River in Iowa, thousands of sturgeon gave up the ghost due to low flows and unprecedented high temps. The Platte nearly died of thirst, with birds, deer, mussels, and endangered pallid sturgeon either disappeared or gone belly up beneath an unrelenting sun. These rivers supported a panoply of organisms that existed in relative stability for thousands of years—until now.

Biblical-scale drought and heat was a later arrival here in the Pacific Northwest. But it settled in around mid-July like a bad fever. The summer and fall just passed wins either the gold or silver medal for driest on record, depending on which regional weather nerd you talk to. In the face of climate prognosticators who predict the loss of almost half the freshwater habitat for steelhead in the next half century, fishers everywhere will have to conjure up some way of keeping the act of steelhead fishing from going the way of the dodo bird. One of the best ways to accomplish this will be to tear out more dams.

If you’re still skeptical of claims about the efficacy of dam removal, take a closer look at the results on some major Columbia River tributaries, all within an hour’s drive east of Portland. Two dams on two tributaries of the Wind River. Condit Dam on the White Salmon. And on the Oregon side, Powerdale Dam on the Hood River. Freeing up these rivers could not have come at a better time. According to research published by scientists at the University of Idaho, these rivers contribute six percent of the annual flow of the Columbia—but provide cold water refuge for 61 percent of migrating adult steelhead. Do the math: of the 320,000 steelhead that passed over Bonneville Dam in 2012, about 200,000 of them hung out for a day or more in a coldwater tributary of the middle Columbia Basin. In a warming and drying world, more steelhead will be looking to chill wherever they can find a friendly lounge with decent food and reliable A/C. Dam removal here amounts to an ambitious expansion project of these oases.

These rivers are literally the birth of cool: The White Salmon, for example, runs ten to fifteen degrees centigrade colder than the Columbia. It gathers rain and snowmelt from the high Cascades, percolates the runoff through fat layers of basalt, and discharges this miraculous hydrologic bounty in the form of springs, seeps, trickles, creeks and rivers at a steady, cool, clear pace, delivering year-round chill to an elevation that might see freezing temps in only the darkest days of winter. Tearing out Condit Dam on the White Salmon provides an additional 40 miles of life-affirming cool to chinook salmon and steelhead. The Hood without its dam is now 140 miles longer to the fish that swim in it. And the Wind River, thanks to some handiwork with dynamite, has two of its key tributaries re-opened to steelhead.

On Trout Creek, the recently freed tributary of the Wind, the removal of Hemlock Dam was accompanied by a virtual army of revegetation volunteers. Some of the stream-side alders shot up to twelve feet high in a year.

“The plants took so well that in places we had a hard time completing our surveys,” says Bengt Coffin, hydrologist for the Gifford Pinchot National Forest, and one of the driving forces behind the removal of Hemlock. “We also doubled the number of steelhead we see in an average year on Trout Creek. To me, it’s hard to imagine a more effective management decision in favor of fish than removing a dam. You take on an action at one point in the watershed, and there’s a ripple effect that seems to occur throughout that system.” Coffin’s enthusiasm for free-flowing water spread to Martha Creek. An old, low concrete structure impeding its flow into Trout Creek was blown up last summer.

Steelhead response to the availability of new territories has been bold and swift. In addition to doubling Trout Creek’s steelhead count, the Hood, in its inaugural unplugged season, saw near-record numbers of spawning chinook, farther up into tributaries than anyone had previously recorded. The rebound came early in the White Salmon: well before the first-year anniversary of the blast that opened the river, there were steelhead above the old Condit Dam.

Rod Engle is the U.S. Fish and Wildlife Biologist monitoring the recovery of fall chinook on the White Salmon. “It’s stunning,” Engle told me.

“We’ve got fall chinook redds in the gravel just upstream from the old dam. They’re using a portion of the river that a year ago was under 40 feet of water and probably another 10 or 20 feet of muck. It’s amazing to think we’re still very early on in the recovery process. For both chinook and steelhead, the recovery is well ahead of the curve.”

Steelhead and salmon continue to amaze biologists with the speed at which they are re-colonizing river miles from which they’d been extirpated. How this is accomplished is the subject of some speculation. Dam removal is a good reminder for both salmonids and humans that a properly working river system moves as much earth as water. The chemical signature of the soils and minerals from specific mountains, suspended in flowing water, is what these anadromous salmon and steelhead, through their uncanny olfactory sense, seek out in order to map their world. Releasing the river seems to mark the way home.

Nowhere is this more evident than on the White Salmon, where, on one October morning in 2011, some three million cubic yards of river muck was moved from behind Condit Dam in just a few hours. The man-made mudflow made its way into the Columbia, where it settled out in the fetid slackwater behind Bonneville Dam, forming a temporary island.

The downcutting action of the revived river has been more dramatic than anyone predicted. A century of sediment was cut loose, and the past year, in hydrological terms, has been something like a fast-forward replay of that same century. Much of the White Salmon, the old-new river reminded everyone, runs through a deep, green, damp, slick, slot canyon. Time sped up forces fishers to re-think old habits.

My first foray fishing the new White Salmon took me to a once-familiar spot where I’d reliably hooked logs and sticks in foot-deep water. Back then, the thrill of the afternoon was hooking a tire that looked like it came off a model T.

Suffice it to say the fishing has improved. The biggest thrill of fishing the White Salmon is the sensation fishers share with the fish. Casting a line there imparts a hybrid sensation of fishing an exotic new river in some unexplored watershed, somehow overlooked by the ravages of civilization. Yet there’s also the inexplicable sense of a familiar; a much anticipated homecoming. I suspect this is a metaphysical thread common to a lot of angling, but on the White Salmon, the feeling is palpable. My favorite spot is flagged by dead, brown vegetation; ghosts marking the shoreline of the old reservoir. Another ten feet down is the newborn living river. The short descent to water’s edge offers a glimpse at the manner in which a riverbank can be hydroseeded with no help from human hands. The riverbed over the past year has been etched into a short, rocky, perfect run. I cast middle river above the bucket and watch as my fly flutters and sinks into the slower current adjacent the near shore. I’m swinging well, and tucked beneath the surface is a mute but not unresponsive audience. The arrival of a much anticipated tug is a variety of call and response.