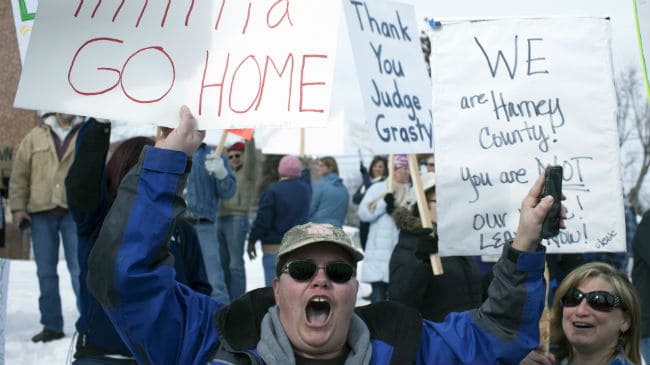 The lesser-known tragedy of Malheur

When Malheur Wildlife Refuge militants in January made the decidedly un-Boy Scout move of announcing their lack of long-range plans by calling for snacks, perhaps they didn’t recognize the plethora of protein swimming just out their adopted back door: a millions-strong armada of carp, so many that their protruding backs can give off the illusion of wind-driven ripples on the refuge’s namesake lake. If the adage “you are what you eat,” has a ring of truth to it, the gun-toting patriots might have done better had they plugged their noses and choked down a carp filet. Unlike the militants, the invasive fish successfully took over the refuge.

Instead, the inept militia men made headlines when they carped about the U.S. Fish and Wildlife Service biologist, Linda Beck, whose job it is to rid the refuge of the overgrown goldfish.

“She’s not here working for the people. She’s not benefitting America. She’s part of what’s destroying America,” older Bundy brother Ryan pontificated early on in the occupation, his comrades’ pizza boxes planted on Beck’s desk behind him.

If Linda Beck is part of the marauding bands of biologists out to destroy the nation, she’s picked a rather unlikely beachhead from which to launch her battle. She’s doing it by overseeing some innovative approaches to severely reducing the carp numbers at Malheur. Carp were introduced here in the 1920s. It was one more mistake in a half-century-long series of errors that has almost completely wrung out the once-fully saturated sponge of giant marsh and lake country (Klamath, Tule, and Malheur Lakes) that was a key stopover on the Pacific flyway. It was here where, on any given bright spring or fall day, millions of migratory waterfowl would stop to rest and refuel.

Bereft bird nerds have not been the only human victims. Though few have had the pleasure of fishing for them, Redband Trout of the Donner Und Blitzen River—one of the feeder streams flowing into Malheur Lake—make for a feisty and fun quarry. (This remote stream is also home to a fat strain of the biggest rattlesnakes you’ll find anywhere, which might help explain the light angling pressure.) Carp are compromising the territory of the Redband, already listed as a “species of concern” with the USFWS. In 2000, the Freshwater Trust, then known as Oregon Trout, created the first fish refuge in the Pacific Northwest, along the Donner und Blitzen.

Biologist Beck noted that trout used to use the habitat in Malheur Lake; in more recent years, capture surveys haven’t found any. What’s worse, the carp are colonizing portions of stream that were recently the exclusive domain of the Redband. As any observant angler knows, this arrangement does not bode well for vulnerable resident trout nor the anglers who love to fish for them.

Beck is the wife and daughter-in-law of Harney County ranchers—a local, which is more than you could say of her uninvited guests, be they Bundys or carp. She and her husband moved back to Harney County from Montana in 2009 to work the family ranch. Beck showed up as a volunteer; two days later, she was hired on as a biologist. She’s devised an innovative if not somewhat harrowing approach to managing dams and weirs at the refuge in such a way that keeps the water moving and the carp confined to their current territory. To help eradicate these Asian invaders, Beck also played an important role in establishing what may become the first commercial fishing venture in Harney County. A partnership with a newly established sister company of Pacific Seafoods—Silver Sage Fisheries—was to begin operation in 2015, but the drought kept their mini-trawlers off the water. The rain has returned, but it remains to be seen if Beck will be able to do so. With or without Beck, the commercial carp fishery at the refuge will provide jobs, exports in the form of carp snacks to parts of the world that have a palate for it, and, for this part of the world, where even snack-deprived desperadoes refuse to touch the stuff, value-added products in the form of carp-derived agricultural fertilizers.

Carp fishers of the high seas of Harney County may still ply their waters this season, but federal officials, as of Mid-Feb., have not given Beck the green light to return from her “undisclosed location,” where she’s been staying since a few of the armed occupants threatened her safety. Since the human refuge-invaders were arrested and indicted, Beck has been unavailable for interviews. But when she was talking publicly, Beck didn’t lament her own predicament, but worried about her work. If the occupation didn’t end, she said, the fight to control carp could be set back years.

The death of any lake, stream, swamp, river, or marsh is sad enough. But the malicious attack on scientists doing the difficult work of keeping ecosystems intact is an outrage, as is the exile of a valued and respected member of the local community in Harney County. “Mal heur,” un- french-ified, translates to “bad time.” In its aftermath, then, one real Western wish: may Linda Sue Beck be granted the opportunity to bitch-slap with a large stinking dead carp, every single one of the asshats that threatened, spoke ill of her, or laid a hand or pizza on her desk.