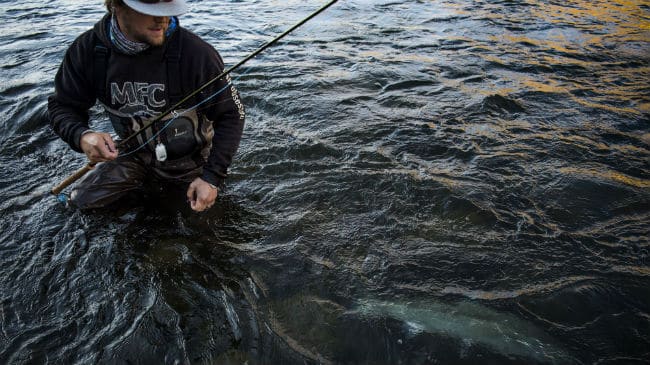 We were steelhead junkies, hooked on moving water. Rivers flowed through us like a stiff Texas breeze. Over a weekend we’d soak up enough to keep us sane for a while, but eventually the beetles would begin to scutter around in our heads again, and we knew it was time to load the truck with whiskey and waders and get to a river. So Duggan Harman and I went up to the Thompson for a few days to see what the river had planned for us.

A rangy, basketball-loving Idaho farmboy who can fix a tractor with a Leatherman and row a driftboat through the nastiest rapids, Harman is to “steelheader” what Zuckerberg is to “wealthy”—no words can describe it. But he’s also the thoughtful, helpful sort of junkie, the kind who brings along a bottle of your favorite alcohol and always reminds you not to forget your stream cleats in the truck. Harman started out as a Bubba of sorts, backtrolling hotshots and shrimp in his native Potato State, before graduating to the fly.

In college, Harman—”sinktip” to those who know him from his speypages moderating days—discovered a unique gift: the ability to see the obvious importance in what others usually dismissed, a quality that made him a candidate for CIA recruitment back in the ’90s. When his shot at a Bourne Identity didn’t pan out, a local job with less skullduggery seemed a better plan, so Harman hired on with Seattle Schools. (Or so it appeared. The public schools gig might be a cover.)

Saturday morning we were up early. I knew a good two-man first-light spot, but we’d have to get there an hour before dawn to hold it. As we rigged our rods by headlamp Harman noticed that the last ten feet of my line looked rather opaque.

“You using a sink-tip? I thought you were some sort of dry line purist.”

“Ah. So it’s a sink-tip then. You got shrimp oil in that vest too, Bubba?”

We fished through the front half of the day without a touch, and after a late lunch I was feeling pretty smug because some quick thinking got us first to this pullout to nab a good piece of water. And it looked like we might have it all to ourselves, a rarity on a busy November afternoon. In a hurry to claim the run, we grabbed our gear from the truck.

“Those felt soles are trouble on this pool,” Harman reminded me, nodding toward my boots. “Don’t forget your cleats.”

I tossed them on the gravel below the tailgate while I dug out the rest of my stuff. Then we double-timed it down the tracks. Soon we were standing riverside, and a coin toss won me the top of the run.

Harman passed me his fly box and I picked through it looking for a likely suspect. It’s a tradition of ours to offer a friend the pick of your patterns, and I spied a purple and red spey-ish looking fly that seemed just right.

“Purple Ho-Tep,” he said as I admired its profile in the afternoon light.

I handed back the box and offered mine. “Purple what?”

“No. You know. From the Egyptian.”

“You went to school, right? The ancient Egyptian pharaohs? Ho-Tep was often part of their names.”

Harman picked through my tube flies. “When I first watched Bubba Ho-Tep, I was working on this new fly pattern. Once I realized what an important steelhead movie it was, I knew I had to name the fly after it.”

Bubba Ho-Tep? I’d seen this movie. Based on the Joe R. Lansdale novella, Bubba Ho-Tep stars Bruce Campbell as an elderly Elvis living in a Texas nursing home being terrorized by the story’s namesake, a mummy in cowboy boots that emerges from a nearby river each night to shuffle the halls, feasting on the souls of the living. Elvis endeavors to vanquish this evil with the help of JFK, played with convincing brilliance by the late Ossie Davis.

With some classic films the steelhead connection was obvious. I could accept, for example, The Godfather as a thinly veiled exposé of the domination and eventual overthrow of the cane and glass rod market by the graphite mafia; and Apocalypse Now as a cautionary tale about the dangers of mounting a DIY trip into a remote and secret steelhead river when the resident lodge owner wants to keep it that way. But a B horror-comedy flick? Sure it was a great movie, but a steelhead movie?

The things you really need to know may take a lifetime to discover, but the basics can usually be grasped in a moment on any steelhead river. This revelation, however, had a depth that clearly needed elucidation.

“What the hell are you talking about, man?” I said, like the Dude said when Walter tried throwing Donny’s ashes into the Pacific, and kept talking about Vietnam.

Harman continued through my fly box. I noted that he seemed to be helping himself to more than one.

“Think about it,” he said. “What is as rare as a steelhead, and just as hard to catch?”

Harman looked dismayed, like he was talking to someone who didn’t know how to tie a nail knot.

“A mummy in cowboy boots! And who is as misunderstood and hard to explain as a steelheader? Elvis in a nursing home.”

He went on. “The movie is genius. The references are everywhere. You just have to look for them. Kinda like finding steelhead. See the connection?”

“The plot gives it all away,” Harman said as he picked out another handful of tube flies. “Elvis’s plan to take some time off gets turned on its head by unforeseen circumstances. If that isn’t about a steelhead trip I don’t know what is. Both take place near a river and involve a lot of running around in the dark. And what steelheader doesn’t enjoy a massage with lotion?”

I tied the Ho-Tep to my tippet while Harman dropped my flies inside his box, closed the lid and slipped it into his left vest pocket. Then he handed back my box. The afternoon sun was angling down the pool and he adjusted his ball cap to shade his eyes before continuing.

“One of Elvis’s great lines in the film seals it. Remember when he says ‘Look man, do I look like an ichthyologist to you?'”

Harman paused to let this sink in. “The scene where they were discussing what they thought was a giant cockroach? But it turned out to be a scarab beetle?”

He paused again, then after a moment he gave me one of those don’t you get it? looks.

“Elvis meant entomologist. They put ichthyologist in there as a joke. For the steelheaders to get. Because serious flyfishers are both ichthyologists and entomologists, right? Everyone knows that.”

Harman’s argument made about as much sense as a Kanye Twitter rant. I shook my head and started toward the top of the run.

“Look at the way Bubba Ho-Tep shuffles through the halls of the Shady Rest Retirement Home,” Harman called after me, “each step more like a careful slide. Like he’s trying not to slip!”

I got to the top of the run and checked my fly box. This is absurd, I told myself. A cowboy mummy movie that’s a steelhead flyfishing metaphor? What a crock. And now he’s got all of my Thompson Stones…

A bit pissed, I stripped off some line, shook it through the guides, and flipped the fly into the currents. Harman was a smart guy. A bit out there, maybe, but if the CIA thought so then he must be smart. Maybe that whole Bubba Ho-Tep thing had been a ruse, a distraction so he could put me off my game, or just take my flies. But if he really wanted to rip me off, why would he develop this so elaborately? He could have just taken the flies last night while I was sleeping. Could I be missing something? Some little detail perhaps?

I waded in. The first step was fine, but after a couple more it seemed the Thompson’s boulders, always a challenge, were unusually slick. I leaned heavily on my wading staff and moved carefully, each step more of a slide, trying to secure a foothold.

Harman worked one of my tube flies up his leader. He knotted the hook on, then sat down on a big rock and looked thoughtfully toward the river.

I Cast. I mended. I stepped. The Purple Ho-Tep swung through its arc, animated by the currents.

Harman leaned forward. “And take a really good look at Ho-tep’s boots,” he said, before drawing an audible breath.

And in that moment, what I thought was my well-placed footing, betrayed me. My boot shot off a rock and I pitched forward. I countered with the staff but it skidded off the bottom and I was falling, pulled forward and down like a backing knot through rod guides until my foot caught between some rocks. Somehow I managed like this for a few seconds, teetering above a wet ending like Harrison Ford in Blade Runner.

Suspended there between the elements, it suddenly became so clear—the sink-tip comment, the soul-sucking mummy, the ichthyologist joke, everything—then I went under.

I came up thrashing and sputtering as the river filled my waders. Then the current pushed me sideways and I splashed about, trying in vain to regain some sort of footing.

But my felt-soled boots slid off the side of every rock they touched.

I floated back to where Harman was sitting. Here the slick rocks gave way to gravel and my feet finally dug in. Soaked, stiff-limbed, and very cold, I slowly pulled myself up and lurched toward the bank.

Harman stood and smiled. “Those felt soles were Bubba Ho-Tep’s undoing, too,” he said.

He adjusted his vest and patted the left pocket “He should have remembered his stream cleats.” Then he turned and strode off down the bank with his cleats and all of my tube flies.