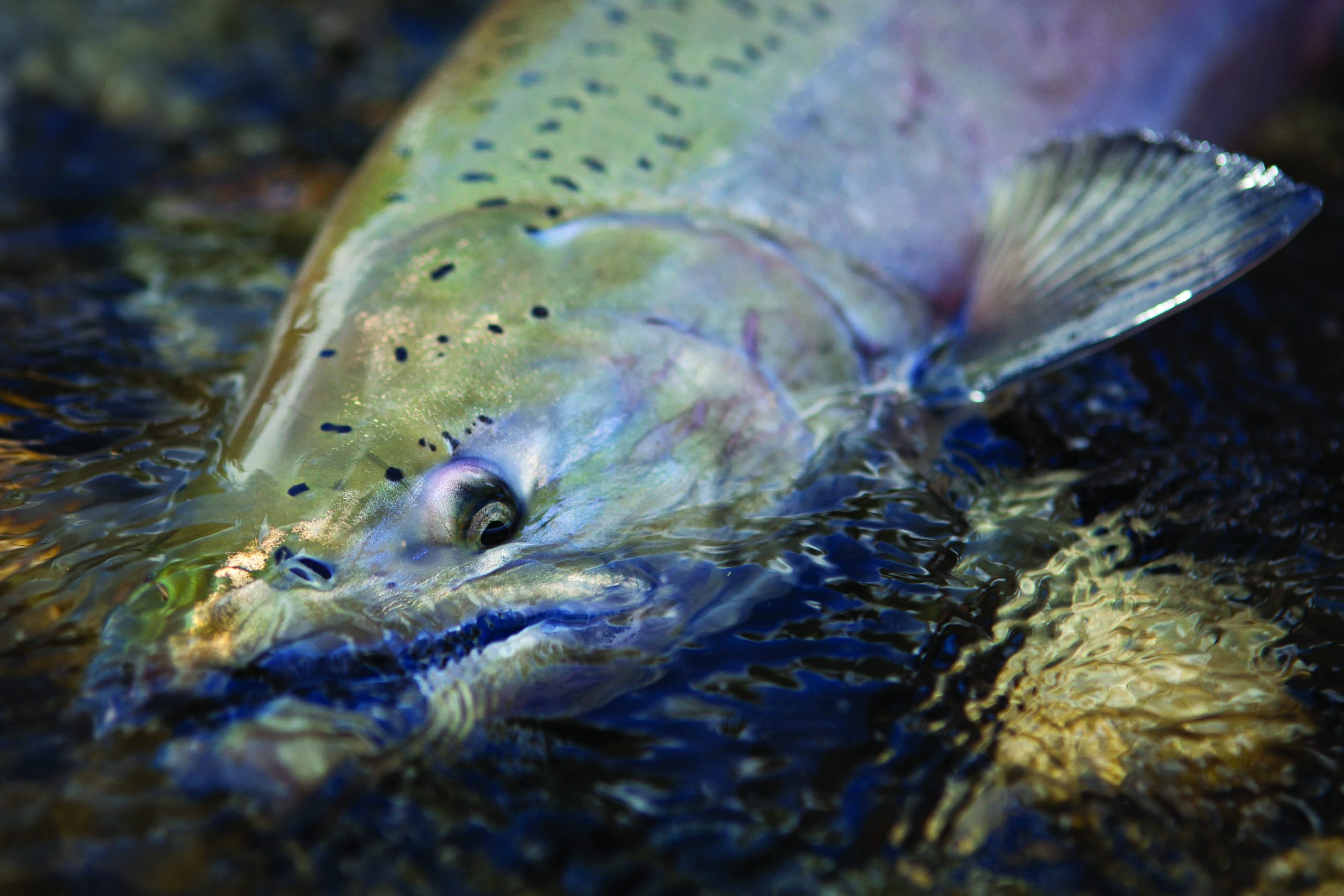 I’ve seen kings blinded by eagles, clawed from rivers and tossed bankside, tails still beating, writhing snakelike over gravel to find water and make their final punch upstream. Kings don’t die like you and me. And it won’t matter who you are or how you die or if you go with grace or some measure of dignity—as a martyr, a mother, or a saint—because we could never hope to die like kings.

Even in death we’re nothing compared to them: zombie fish dying in the shallows, rotting even as they somehow push on, spawned-out but still swimming, feeding only on themselves now, soon to beach their once ocean-bright bodies, fertilizing what will be their legacy. Rot and white fungus and gill-covers barely opening and closing, but their hearts still beating like Gods. Kings die like distant thunder. They die hard, like hope, and if they had hands, they would carry the sun. 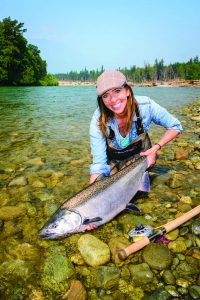 But that’s not us. We’re nothing compared to them. If we knew we were going to die, we’d just stop swimming. We wouldn’t do the work. We wouldn’t finish. You know we’d give up. You think that because we are here in these rivers trying to catch them, watching them do their work, beating their way up miles of glacial rivers blinded by silt, with sea lice dropping off them while leaping up goddamn waterfalls and dodging grizzly bears that we know them? Face it: You don’t know them, and you rarely catch them. So go ahead and hook one. Go ahead and try to hook one of these pieces of wild love. Go ahead. You’ll see. Hook one and suddenly there you are: tied to hope.

It all begins in the shade of the cottonwoods, alders, and willows, beneath stalks of devil’s club and purple monkshood, with moose bedded nearby in the shadows: kings thrashing in their redds, hens flanked by the big males. On the edges, pushed aside, are the little jacks, having come all this way only to watch. They hold in the slack water where the bears will find them soon enough. More thrashing in the shade and a big hen tips on her side now, beating the redd deeper, a pair of thick bucks holding close, the broadest of them next to her, the color of old blood, open-mouthed, his body shivering with hers, together dropping milt and eggs while the olive-backed char dash in for what they can grab. The dollies continue to poach loose spawn, growing bolder, stronger from eggs fattened at sea, as a pair of black bears ramble in like dogs. One of them hits the water like a Labrador and comes up with a little male. The big hen, sensing the threat, slips under the root wad of a downed cottonwood as the tree, lodged crosswise to the current, thrums with the flow of the river. Soon the bears will move on, and the big hen will be back on her redd, dropping more eggs. At dusk, brown bears will move in on ancient paths beaten flat and wide, their scent sweeping across the water to where the moose—a cow and last year’s calf—will move off with high steps and noses in the air. And next spring, smolts will pour from these rivers like shards of glass, beating their way to the salt.

One morning we hooked a big king in a river thick with fish, an hour’s hike from the end of the last road, over railroad tracks and then through the birches and cottonwoods, until we broke out of the big trees and onto a great glacial floodplain. The river—braided and filled with the kind of gravel that washes from under your boots with each step, forcing you to keep moving—would rise in the heat of the day, fed by meltwater from the Alaska Range, only to fall in late evening as the ice slowed its melt, with the sun on the horizon and still slowly falling. By morning, the water would be lower still, and we fished where the small stream dumped into the big gray river. The kings were waiting there, holding beyond where the clear water mixed with the silt.

The big king—when we came tight to him the first time—could not be stopped. It ran hard and straight and did not jump. It tore off the bright yellow fly line and then it tore off most of the backing and after losing 200 yards to the fish, we had no control, and soon the line went slack. We sat down, the way you do after losing a good fish, searching our packs for another fly line that we knew wasn’t there. But then, twenty minutes later, we began to see what we thought was a flash of yellow out deep in the river. Soon enough the yellow came into view and then the line was moving past us, slipping steadily upriver, and then the white backing, too. We snagged the backing, slowly coming tight to the fish, giving as much pressure as we dared, and we began to follow, the line now alive in our hands. You could feel the heavy salmon moving faster.

And then stopping, ferrying out into the river and then, farther upstream, sliding closer to shore. The big fish would hold for a few beats against the push of the river, against the heavy current, and then keep moving. We were sure there would be no stopping it, as if we were hooked to the turning Earth itself.

We wrapped what slack we gained around a heavy branch and kept walking, cutting the distance between us and the king, the white backing growing thicker with each wrap. When we got to the yellow fly line, we began to wind faster. The fish held in the soft water behind a boulder, mid-stream and just thirty feet from us, but hidden in turbulence. We wound slowly now, coming tighter to the fish with each wrap, expecting an eruption that never came. Instead, the king slid out from behind the rock, coming toward us into the clear water where we could see it for the first time. The fish was broad and thick and long, and it beat its tail like a broom, with eyes locked upstream, the fish swimming in place now, neither gaining nor losing river, our steady pressure holding it in the current like a kite in the sky. We held the big king long enough for it to roll on its side with its eye, its iron-black pupil, still looking beyond us, as if we were not there, had never been there, indifferent to us and what we had done to it. Still on its side, we slipped in behind the big buck and—working together—grabbed the thick tail and, with pliers, slipped the hook from where we had buried it earlier that morning. 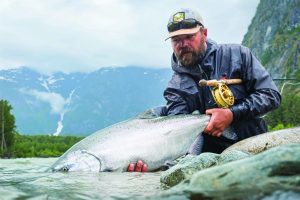 Kings bring us the ocean. They show us what we left. What we lost. Not that we could ever hope to return, but they remind us of what we crawled from. For us, land was our best hope. It was our last chance. We had to do it. And they would have surely been there all those years ago—prehistoric kings calmly studying us as we colonized the shallows—patrolling beneath the surface, cutting broad wakes before sounding and staring up from the depths of their sea as we found ourselves propped up on our limbs, gasping. Those ancient kings, there in the depths, they were watching us, mocking our proto-lungs and swimming deeper in judgment, knowing that we were forever forsaking the miracle of gills.

They were here before us, and they will be here after we are gone, after the waters have risen and our dams have failed. Kings will be swimming past ghost nets and the rusted hulks of purse seiners, through breached locks and an ocean still filled with our plastic: the tide awash in flip flops and grocery bags pulsing in the waves like jellyfish, bottles blown ashore with not a single message inside. One day all this will again be theirs. Everything will be returned to them, and they will take back their rivers.