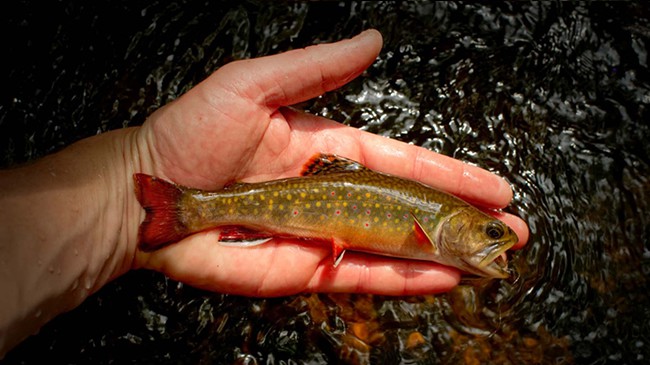 One year after trading electrodes for drip stations, the plan to remove brookies from Yellowstone's Soda Butte Creek appears to be working.

NO ONE IS SURE where the brook trout found in Soda Butte Creek came from. Maybe a flood washed them over from a neighboring drainage. Maybe somebody in Cooke City had a bucket and a brookie fetish. Then again, the source doesn’t exactly matter. The fish are interlopers in one of Yellowstone National Park’s most popular cutthroat streams. That was enough to put them in the government’s crosshairs about 20 years ago, as biologists worried the colorful trespassers might one day displace the iconic Yellowstone cutthroat that call Soda Butte and the Lamar drainage home.

To prevent that, electrofishing crews shocked and killed brook trout in the creek’s upper portions. It kept numbers low, but government biologists decided that wasn’t enough. Electrofishing wasn’t going to eradicate the non-natives, and it wouldn’t prevent their expansion.

“That’s when you look at the big picture and say, ‘Something else needs to be done here,'” says Jason Rhoten, a fisheries biologist for Montana Fish, Wildlife & Parks (FWP), who worked on the project.

So in 2015, FWP, Wyoming Game and Fish, the U.S. Forest Service, and Yellowstone National Park proposed trading electrofishing backpacks for poison, specifically an Environmental Protection Agency-approved piscicide called rotenone. The plan: Treat 38 miles of water above Ice Box Canyon—including tributaries—and then stock genetically pure Yellowstone cutthroat. They said it could knock out the non-natives in one or two tries and save taxpayer money by eliminating the need for annual electrofishing trips.

Slam dunk? Not quite. Some anglers and outfitters opposed the project, many of them pointing out that there already were a lot of cutthroat—slightly hybridized, but still considered native—in the sections slated for poison.

With that in mind, the agencies decided instead to capture as many Yellowstone cutts as they could and sequester them elsewhere while they ran rotenone through Soda Butte. In late August and early September, they went to work. Crews salvaged about 3,000 Yellowstone cutts, and rotenone drip stations killed somewhere between 300 and 400 brook trout, tripling the number removed by electrofishing in 2014.

That should spell good news for the indigenous fish, which biologists all over the country are working to preserve. In Yellowstone National Park, the focus on saving natives in certain areas is a major change from its early decades, when government officials stocked fish all over the park without thinking much about the impacts. As a result, non-natives pushed natives out of large swaths of their range.

Attitudes have shifted toward preserving the ecosystem’s original occupiers. But in some cases, park officials have decided to leave non-natives alone. In others, they kill foreign fish to help natives rebound. The best known and most-debated example is at Yellowstone Lake, where lake trout helped decimate native cutthroat populations. Since 1994, park officials have removed— sometimes via controversial methods—close to two million lake trout, including a record 315,000 in 2015.

The Yellowstone cutthroat has been the more dominant species in Soda Butte Creek, albeit with some help. For years, mine tailings restricted brook trout to the uppermost sections, and the two decades of electrofishing suppressed their numbers. Anglers who have caught brookies there aren’t common.

Parks was one of the loudest critics of the switch to rotenone. At the time it was proposed, he compared it to using “a sledgehammer as a fly swatter.” He believes in conserving native fish, but was also worried that it could come at the expense of a lot of native cutthroat. He was glad the agencies decided to save some of those fish, and recently said that it seemed the population was doing OK after the treatment.

“There was not as much of a shock to the total population in the system as we initially feared,” Parks said.

Whether all the brook trout are gone remains to be seen. Biologists will head back later this summer for a follow-up treatment. If they find more of the non-natives, more rotenone applications may follow before they move to the next step— adding genetically pure cutthroat. Koel, for one, is optimistic.

“We’re pretty confident we won’t find anything this year when we do it again.”