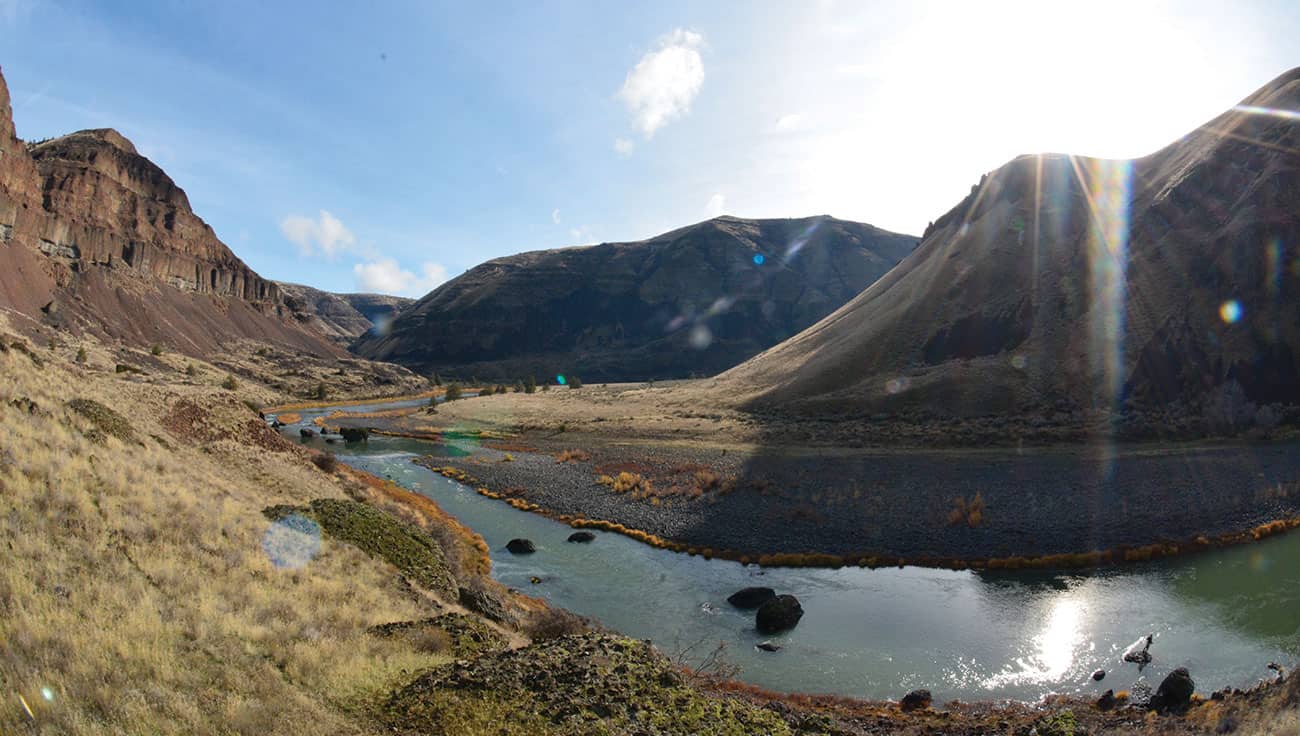 A different take on Wild and Scenic Rivers

When I opened the car door, a mangy border collie barked and charged at us. Mike Murtha yelled, and the dog backed off. Mike was in his 80s and wore a dusty-brimmed Stetson and tattered Wranglers. He smoked Camels, and his hands resembled the harsh, cracked earth of the surrounding desert. Tin cans filled with cigarette butts cluttered his porch. We sat on a muddy couch and drank Jack Daniels as Mike told stories of hunting mule deer, and talked about what the John Day was like before rafters, and before regulations limited grazing.

I needed access to a locked gate so I could take my raft out. The gate was at the end of a public road and this old coot had padlocked the only fucking way to the river. The county sheriff said he couldn’t give us access because it was Murtha’s gate and I needed to ask him. (Such is rural politics.) So that’s how I found myself on his porch, sipping whiskey. I learned that he was born in the 1920s to James and Kathleen Murtha and grew up on the family ranch. His parents homesteaded on the John Day and made a life of running cattle before it was designated in 1988 under the Wild and Scenic Rivers Act, which celebrates its 50th anniversary this October.

I finally got the courage to ask if I could take my boat out and drive across his property on the public road. “As long as I’m alive, no damn rafter is going to take out on my land,” Mike hollered. “But you can chukar hunt.”

This wasn’t the answer I wanted. I needed access to the takeout during summer months for smallmouth bass trips. As an upland bird hunter, the chance to hunt private land would be nice, as it would almost guarantee success in killing a few chukar—a partridge that cackles at you as you drift downriver. But how could Murtha not give me access to one of only four public boat-launches on the lower 100 miles of the river?

Central Oregon’s John Day remains one of the longest undammed rivers in the Lower 48, in company with the Yellowstone and the Salmon. Access is limited in part because most of the river corridor is privately owned. Originally known as the Mah-hah River, the name was changed after fur trapper John Day came to Oregon in 1812 with the Astor-Hunt group, got separated from his party, was ambushed and stripped naked by Indians, and was found nearly starved to death at the mouth, where it meets the Columbia River.

Developers 100 years ago had big plans to dam the John Day before the mainstem of the river—nearly 150 miles from Service Creek to Tumwater Falls—was protected for its recreation value. The WSR Act was created to preserve certain rivers with outstanding natural, cultural, and recreational values in a free-flowing condition for the enjoyment of present and future generations. It safeguards fish, wildlife, and recreation, but for some ranchers, it has created regulations that restrict them from running livestock. It has also brought more people to the river, which has long been a concern for those that have grown up along its banks. 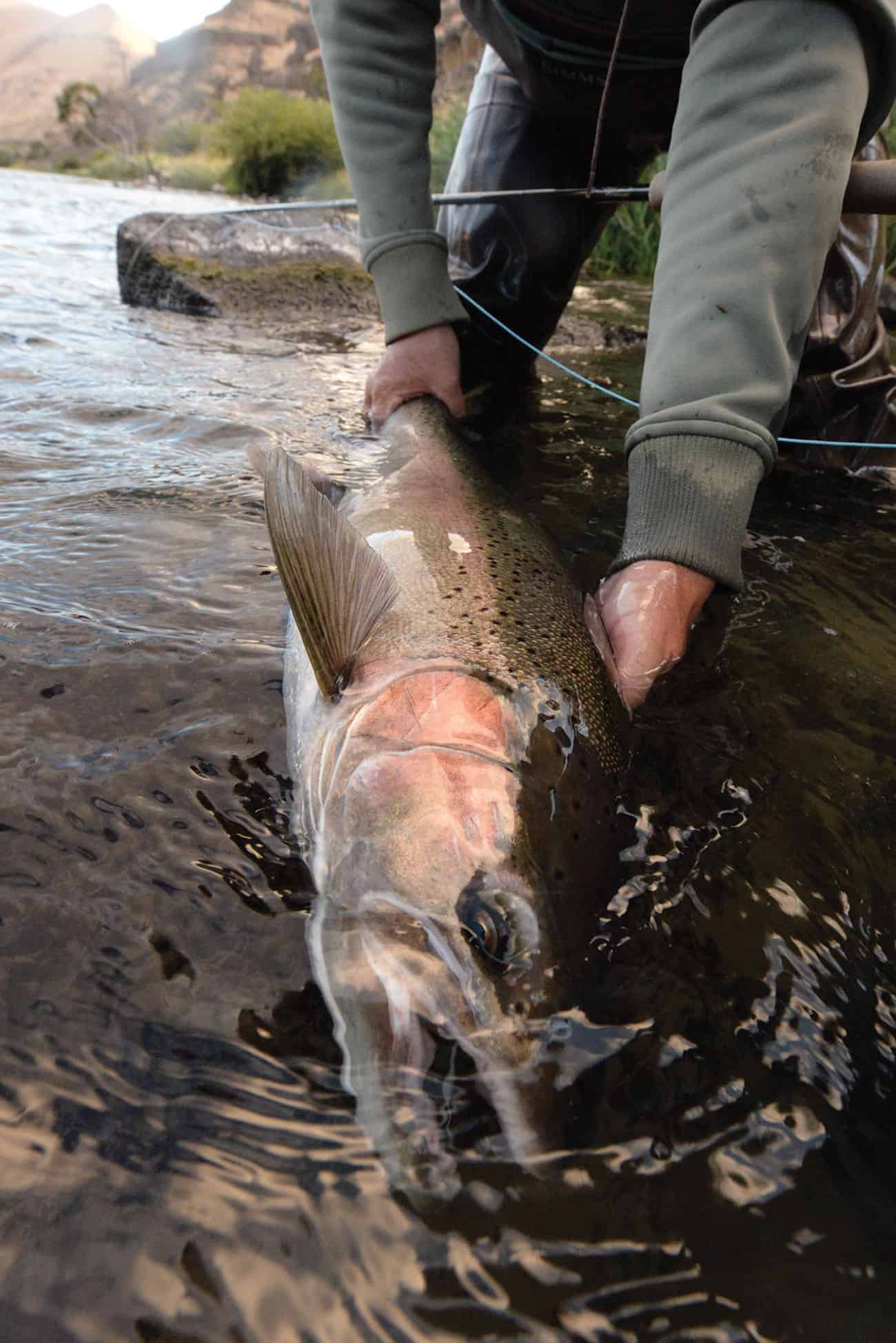 Worth a four-day row and worth protecting. Photo by Marty Sheppard

Rita Rattray, a fourth generation rancher, grew up on the John Day with her parents and four sisters. Her grandpa homesteaded the land she still lives on in 1918, and Rita was a baby when her father moved the family to the river in 1945. “Living was good there, with plenty of freedom to run,” she says. “It was a magical place for kids to grow up.” The family lived in a small adobe house with a kitchen and one bedroom. Rita was there till the sixth grade, until the family moved to the top of the canyon and spent only the summers on the river. She helped her dad run cattle, make hay, train horses, and compete in rodeos. “I was the cowboy out of all the girls,” Rita says. “I would do anything to get out of doing housework.”

She said she remembers when the government designated the John Day as Wild and Scenic. “We fought it tooth and nail,” she says, adding that, initially, the designation didn’t change much.

“It wasn’t till the ’90s, when environmentalists started demanding that the cattle be off the river—they wanted everything fenced,” she says. “It really hurt the livestock industry, and it also increased the fire danger because of the no-grazing regulations. Plus more people started floating the river.”

The concerns of ranchers are understandable, especially how they feel regulations have hindered cattle operations, but it’s also apparent how the Wild and Scenic Rivers Act has protected many wild backcountry landscapes; places that all of us need to find refuge from growing urban sprawl.

Rita’s not opposed to recreation, and thinks the WSR Act has been good in some ways, such as protecting culture and recreation values. Regulations under the Act limit development, and prohibit federal support for the construction of dams, protecting the free-flowing waters. This is what makes the John Day a world-class bass and wild-steelhead fishery for anglers, and a multi-day, bucket-list drift for rafters.

The river strolls and meanders naturally nearly 300 miles through 20,000-year-old basalt pillars and outcroppings. Though the mainstem doesn’t have the official wilderness designation of the 85,000-acre North Fork John Day Wilderness, it still has a wilderness-ey feel to it, even as you float past remains of abandoned homesteads and petroglyphs hidden on benches and canyon walls. As I drift down its course, I notice subtle changes in its path carved out by flash floods and spring runoff. At low water I study the streambed, taking notes of rocks and places where steelhead or bass have been hooked and sometimes landed.

Has the Wild and Scenic River Act made this river a better place? Perhaps, but it has also come with a price. More people float it now. I pick up trash left behind at camps, clean up fire rings, bury human waste, and pull invasive weeds. I wonder if this is why Mike Murtha said he would never let a boater take out on his property?