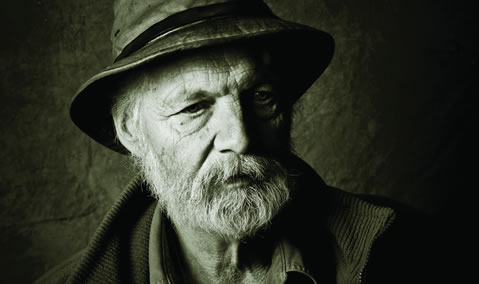 To understand John Gierach the writer, you need only look in his fly boxes, where you’ll find row upon row of meticulously tied flies sorted by purpose, size, and species. At first glance they’re the standard patterns we all carry, but start poking around and you’ll note an unexpected rib on the BWOs, an arced shank and a split tail on the flavs, bright yellow eyes with apprehensive black pupils on the sculpins. What at first seemed simple and unadorned and workmanlike upon closer inspection is as complex and graceful and singularly elegant as a Japanese painting.

Which also describes his writing. John seems to write without effort, laying out the account of an interesting, perhaps slightly cosmic fishing trip that feels less like linear ink-on-paper than a conversation between friends lingering over breakfast at a diner.

It’s deceptive simplicity. In more than 25 years of editing books and a magazine, I’ve seen only a handful of writers who needed so little editing, who so seldom plonked out a cliché or an inappropriate modifier, who could say so much with so few words. Except for John, none were fish writers, but all were artists who would stare into space until they’d conceptualized The Main Thing, and then they became master craftsmen who would sit at their desks until they’d absolutely said what needed to be said, and not one word more.