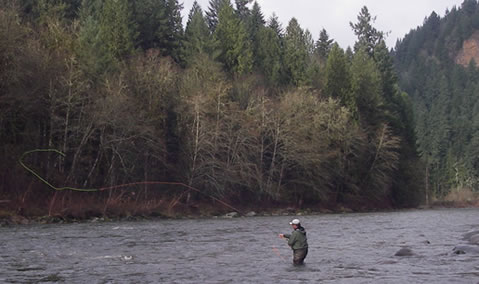 When most of us hear the words “steelhead river,” we think “remote.” We imagine bright wild fish and hairy mofos wading waist-deep, bombing Intruders to the far shore. And maybe that’s why so many people cherish Oregon’s Sandy River: it offers the best of steelheading—only thirty minutes from one of the hippist cities in America, Portland.

On April 14, The Native Fish Society and the Pacific Rivers Council delivered a notice of intent to sue the Oregon Department of Fish and Wildlife (ODFW) and NOAA on the grounds that they colluded to poach the Sandy River’s ESA-listed salmon and steelhead. The notice identifies two types of illegal harvest: 1) the death of native offspring due to the presence of hatchery salmonids on the spawning grounds and 2) the direct killing of wild salmon and steelhead for milt and eggs.

The Sandy’s salmon populations are currently teetering on extinction, and its winter steelhead, which once numbered 20,000 strong, have dwindled to as low as 800 fish. State and federal agencies charged with protecting these species have responded to the crisis by maintaining a robust hatchery program. This spring, the Oregon Department of Fish and Wildlife (ODFW), with the support of NOAA, released 1,250,000 hatchery-reared salmon and steelhead into the river. Without these hatchery supplementations, they argue, the river wouldn’t support the fishery it does now.

Except for over a decade, ODFW and NOAA have known that hatchery programs negatively affect wild populations. ODFW catches and kills hundreds of native salmon each year to produce its hatchery fish. Moreover, returning hatchery adults have unfettered access to spawning grounds, where they interbreed with remaining natives and, according to one study by Oregon State researchers, reduce the fitness of the offspring by 40 percent.

A response from ODFW and NOAA is expected in early summer.