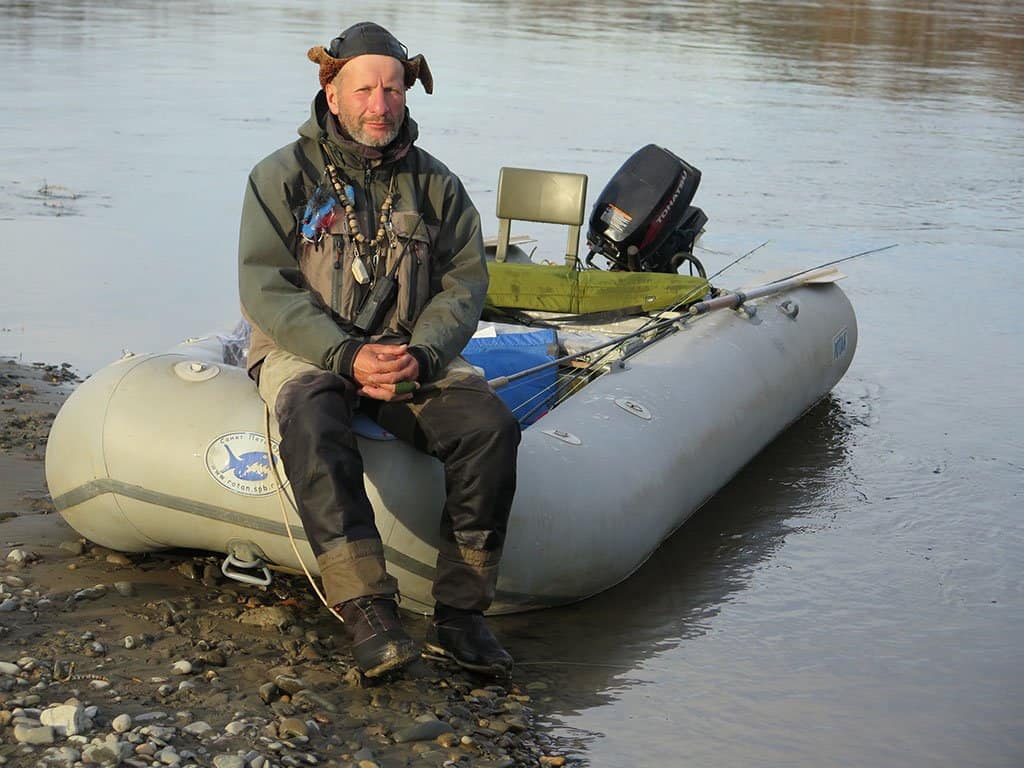 One day in the summer of 1979, Dr. Mikhail “Misha” Skopets, a young Russian ichthyologist based in Magadan in the Soviet Far East, found a mysterious fish skeleton in the stomach of a Boganid char. He’d been cutting up the latter for dinner on an expedition to the remote and frigid Elgygytgyn Lake, a uniquely deep, round, air-clear basin of water created three and a half million years ago by a meteorite. Recognizing the skeleton as likely belonging to a new species, he arranged to return, six years later, to search for its owner, prepared to spend all three ice-free months if necessary. 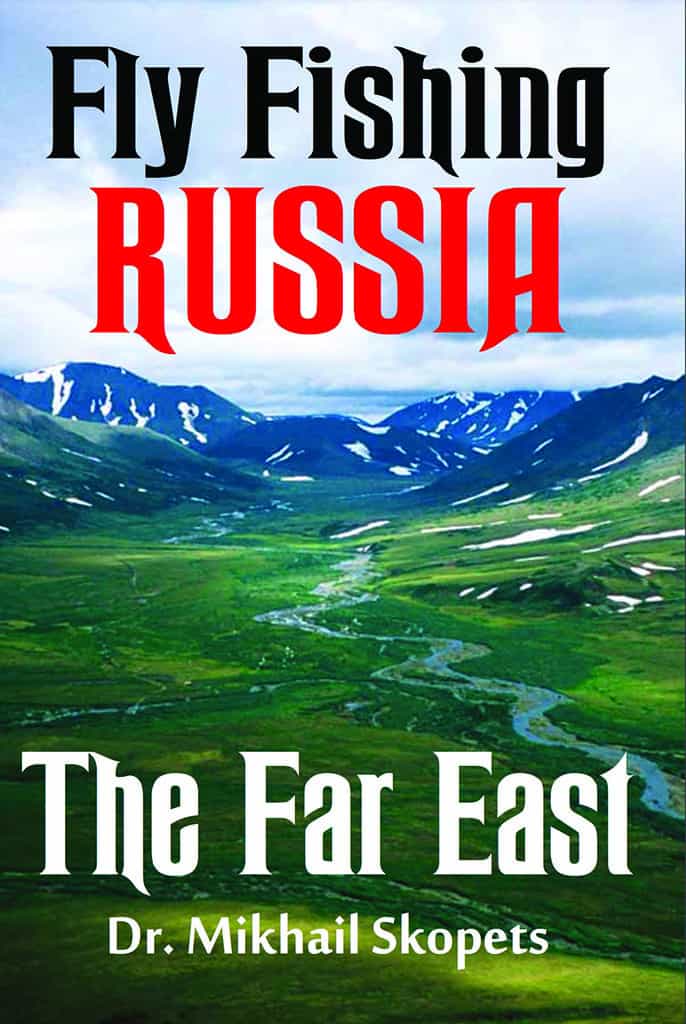 For weeks he probed the lake edge with rod and reel. No luck. As the ice receded he began using a boat to get out onto the lake. There, using ropes and beach rocks to suspend a gill net at a depth of 300 feet, he snared a dozen little fish that no scientist had ever seen. Salvethymus svetovidovi, the long-finned char, turned out to be a new genus, an evolutionary link between char (Salvelinus) and grayling (Thymallus.) Astonishingly, one 12-inch specimen was 30 years old, the same age as him. “It was the most exciting moment in my scientific career,” the now older and phenomenally accomplished Skopets told me recently.

This and countless other swashbuckling anecdotes are recounted in his newly published, Fly Fishing Russia: The Far East. The book is Skopets’ magnum opus, representing an incredible breadth of knowledge amassed on more than a hundred river expeditions spanning four decades across the whole of the Russian Far East (RFE). Described variously to me by colleagues of his as “an old-school field scientist,” “a migrating bird,” and “Indiana Jones for wild salmon,” Skopets’ equal and overlapping capacities as professional ichthyologist, flyfishing innovator, wilderness guide, author, and key figure in the birth and growth of flyfishing inside Russia, puts him alone at the center of an extremely specialized Venn diagram. Only Misha Skopets could have written this book.

Fishing cultures everywhere rely heavily on superlatives to derive and convey meaning. The Biggest Fish, for example, being sort of like God. In this way the RFE will be a place of intense interest to any adventurous flyfisher. It is the purest, most vast, sub-arctic wilderness left on Earth, through which flow tens of thousands of holy grail rivers filled with astounding biodiversity and, sure enough, even The Biggest Fish.

In terms of total size and ecological diversity, the RFE can usefully be compared to a western Pacific version of Alaska, Yukon, British Columbia, Alberta, Washington, Oregon, and Idaho combined, with one quarter the population, far fewer roads, and more fish. Throughout nearly 600 pages, Skopets introduces the region’s 16 “Zonations.” Rivers in the Arctic, such as the mighty Anadyr and Kolyma, flow north out of forested mountains, cross coastal tundra plains, and terminate at the Polar Sea. Cold-climate species live here—chum salmon, char, grayling, sheefish, polar bears.

In the middle hangs the incomparable Kamchatka Peninsula, home to volcanoes, spring creeks, brown bears, the Asia-only cherry salmon, a 126-pound commercial-caught chinook, and the world’s most complex diversity of mykiss, from rainbow trout with bellies full of mice, to huge steelhead that spawn seven times. 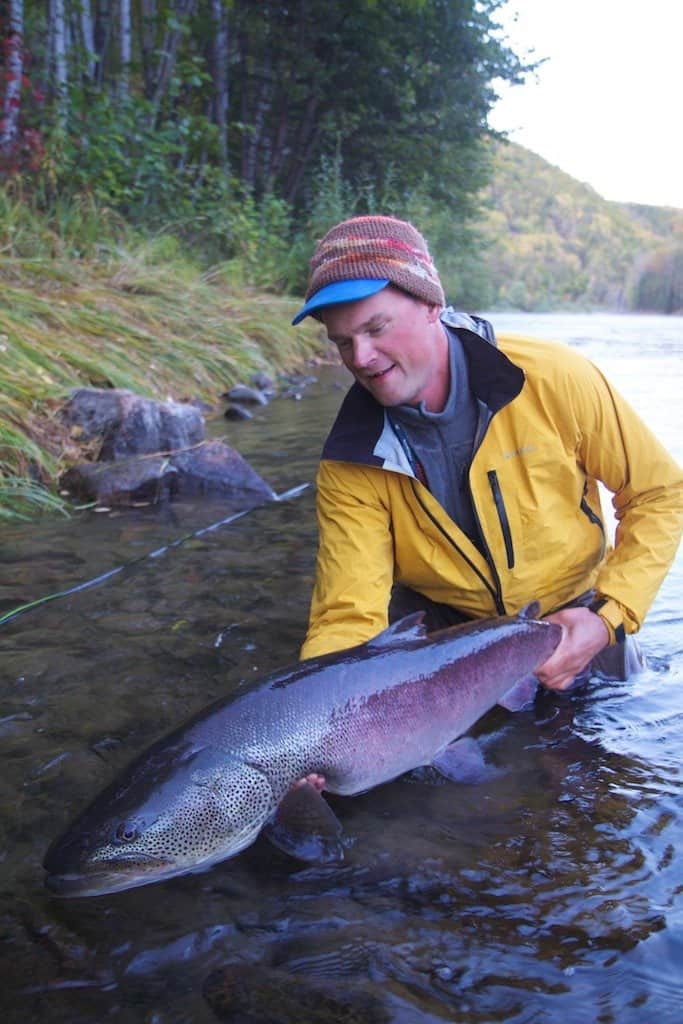 In the southern zones we learn of the Tugur River, where famously gargantuan Siberian taimen still mostly thrive; the Koppi, home to sea-run Sakhalin taimen and Amur tigers; and the Amur River itself, tenth longest in the world, forming the Russian-Chinese border, in which Skopets has caught dozens of species on a fly with names like skygazer, yellowcheek, three-lip, and sawbelly.

In typical guidebook fashion we are given the rundown on each region’s standout rivers, their character according to reach, and what species and style of fishing can be expected. There are additional chapters on life histories, behavior profiles, and best tactics for certain fish families, including what must be the most thorough accounting of taimen ever put into popular print. (Spoiler alert: To successfully “hunt” a big one, be prepared to camp on its lair for several days and wait for it to feed. Even then it will probably refuse your fly since it prefers whole salmon and sometimes muskrats.) Sections on rainbow trout and salmon offer insight and trivia that will interest anyone around the North Pacific.

But Skopets also doggedly gives us page after page of detail on obscure, impossibly remote tributaries, lakes, and bits of coastline that you get the sense only he will ever visit. Here we are getting not just the first mentions in print of rivers from the perspective of a fisherman, but in some cases the first mentions of any kind. Gennady Zharkov, owner of Nakhlyst (Flyfishing) magazine in Moscow, who has published more than a hundred articles by Skopets, reflected on how his friend’s completist style can sometimes get the better of him, not necessarily in a bad way. “For Misha, behind every page there is an entire book.”

The result is something that feels out of time, like edited field notes in a lineage with the great Far East explorer-authors going back to Vladimir Arseniev in the early 20th Century and Georg Steller in the mid 18th. These are men who left their homes in the West on a quest to better understand the natural world by getting dirty and observing it directly. With equal parts passion, curiosity, intelligence, and empathy for that which they describe, their writings are wholesome, seeking to add to a collective understanding of big ideas.

Yet Skopets is an obsessed flyfisher, in the finest fish bum tradition. By his own admission he was a fisherman first. Ichthyological study came along later as a means of learning everything possible to better catch fish. It’s a rare combination anywhere to find such dual experts in one person, but it is lightning-strike strange that one of the world’s most experienced fishermen came of age in the Soviet Union. There, he told me, when he was young, the number of serious flyfishers across the whole USSR was “three or four.” Commercially produced gear didn’t exist, so he re-fitted the handles of spinning rods to make fly rods, and then handcrafted lines by threading emptied electrical-wire housing. Later, when he began working with the first American fishing and conservation groups to visit Kamchatka in the early ’90s, the exchange of modern gear, techniques, and fly-tying theory (covered in four of the book’s six appendices), put both parties in a more international vanguard.

Meanwhile, the learned naturalist in him makes connections that give meaning to what he has seen while fishing, and (mostly) doesn’t fall into the hyperbole typical of commercial adventure-travel. It is dangerous to fetishize anywhere as an “exotic paradise” because that can lead to consideration of it as something fundamentally different from anywhere else in Nature. Rampant deforestation, placer mining, cartelized poaching, and overfishing are making deep marks here as global demand for raw resources soars everywhere. The great, 180-pound taimen of the last century, for instance, are gone, likely never to return. They are apex predators, as long-lived as a human, and to reach maturity need to be nurtured by the entirety of a fully intact ecosystem. “Unfortunately, such situations are nowadays rarely observed,” he writes straightforwardly, “It looks like this ancient fish group is incompatible with humans.”

What Fly Fishing Russia: The Far East is not, is a list of hotels, gear shops, boat rentals, and air taxis. I worked for many years as a marketer and guide for flyfishing trips on Kamchatka, and would occasionally get asked how to pull off a dirtbag-style trip.
The answer is that it is hard because you need two things to reach the good stuff:
1.) Many hours in a four-thousand-dollar-per-hour helicopter, since easy-access water is so over-exploited as to offer no better fishing than your average home river, and
2.) An interpreter of language and local custom to help you navigate a place without much tourism, where English isn’t spoken, and, as Skopets tactfully puts it, “to solve problems that may arise with officials or airport managers.” In this sense, finding a local guide you can trust with your life (or at least your money), whether through an established American-managed outfit or a domestic solo operator like Skopets himself, is imperative.

The book’s typography, design, and snapshot photo illustrations are typical of modern self-publishing and simply do not adequately serve the grandeur of the subject matter. However, Skopets’ unpretentious and sometimes eccentric prose (this isn’t a translation; he writes in English) is charming and easy to absorb.

Having such passion and unparalleled experience with his subject, what we get on the whole is far from a dry accounting of what/when/where, but rather a colorful and heartfelt witness-statement in which Skopets seems to be speaking to posterity about a place he loves. The physical act of catching a fish with rod and line remains an ultimate, literal symbol of the connection our species still has with Nature. To continue the metaphor, though, the hook can easily slip from the jaw. Hopefully, with the knowledge passed along in Fly Fishing Russia: The Far East, we can, in our travels, stay on the right side of the line between appreciation and exploitation for a little while longer. 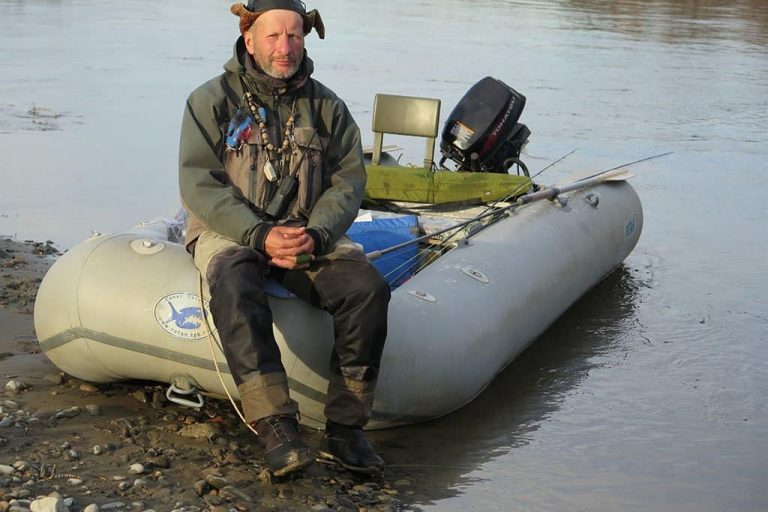