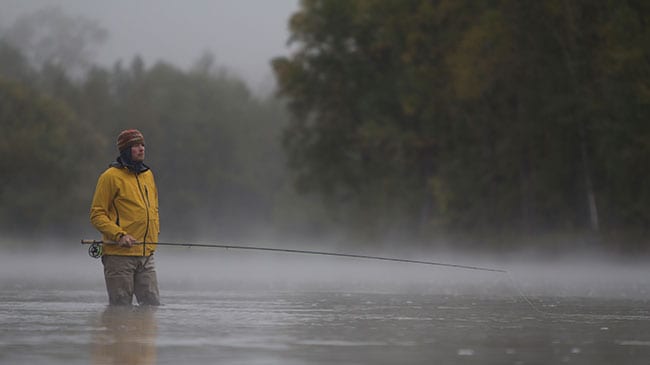 One salmon to rule them all

On the hundred-and-first cast the first strip felt dull, the second heavy, and the third came tight with a thuggish throb. Silver and pink flashed underwater a split second before the river broke in a shower of water ten feet across. “Taimen! Taimen! Taimen!” yelled Victor Voydilov, who was popping up and down on the rocks behind me waving his hands. “Set the hook! Hard! Harder!” Adrenaline. It felt like the line was connected to my spine. A phrase looped in my head: This is a sea-run taimen.

I first became aware that such a thing existed nine years earlier during a midnight vodka tête-à-tête with a Russian biologist. Like many flyfishers, I’ve long been intrigued by the river taimen of Mongolia and Siberia, with their circus-freak size and reputation for squirrel eating. My curiosity comes less from a desire to catch one, though, than from fascination over their place in the universe.

Meanwhile, I’m a slave to the silver dash of a sea-run fish. Those of us who follow them, trancelike, from cold creeks rimmed by fog and conifers to grey oceans underneath the wings of pelagic birds, find heroism in their wanderlust and style in their shape, beauty, and indomitable strength. If these qualities were to somehow be infused into a taimen?…the largest salmon thing on Earth?…I could feel my heartbeat in my ears.

Seven years later over drinks, John Sherman, a photographer friend, was describing an ambitious book he’s been working on for years, based on his attempt to catch and document all the world’s sea-run salmonids. I suggested a truly completist effort ought to include taimen and fed him the buzzwords: silver, huge, Russia, eats whole salmon, tiger. He committed to a trip on the spot. “OK,” I said, “let’s stay in touch.”

“No. You don’t understand,” he said, sensing my bar-talk radar, “I’m the guy who will do this.”

Click here to purchase the Spring 2014 Issue to continue reading