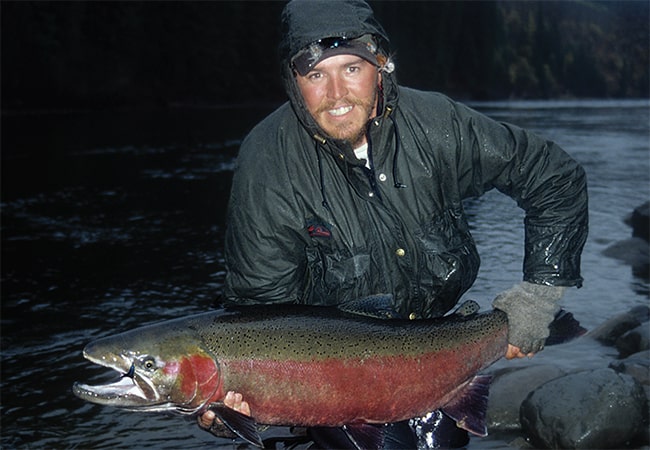 Steelheading the Babine is never easy, just worth it.

FLOWING WATER, BY DESIGN, HAS A SANCTIMONIOUS way of pre-qualifying its clientele. Gentle riffles and wide gravel bars lure the false-casting masses, and boiling black holes rimmed with mossy ledge rock frighten them away. That said, I suppose there’s really no great mystery why the easy flows produce the fussy little degree-candidate fish, while the spiteful, intimidating rivers hide the gluttonous thugs.

British Columbia’s Babine River had been high on my list for quite some time and I jumped at the opportunity when I heard that a space had opened up during a prime fishing week.

“Big steelhead—but not an easy river to fish,” I was told by my friend Tom Knopik who had fished the Babine many times. Naturally, I spun those phrases around in my mind for a few days and then conveniently extracted the words easy, big, and steelhead. Six months later I would fully realize the significance of that mistake. 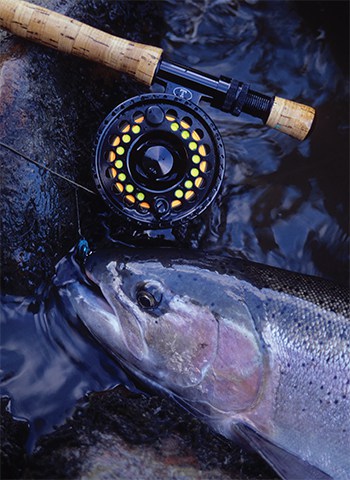 On my first run downriver from Pierce Clegg’s Norlakes Lodge, I noticed that my guide, Darcy Edwards, seemed most interested in stretches of water that an adult moose wouldn’t try to cross. Darcy would slow down and peer intently into the deep, rolling holes, and then he’d rev up his throttle and race through the slower shallow runs. “That’s a good looking pool,” I cautiously announced as we sped through a long glassy fl at with a nice riffle at the top.

“Dickwater,” Darcy said, “there ain’t no steelhead in that.” After passing a few more of those placid runs, we finally stopped along a steep shoreline littered with fallen spruce trees where Darcy pointed among the blow-downs into a foreboding cauldron of crashing water. “This here’s where you’re gonna spank their scaly asses,” he announced, “Grab the rod with your heaviest sinking line and hop on out.”

He was about to shove off and check on another angler downstream when he noticed me standing on the bank and staring at the river like an overwhelmed toddler. “How should I fish this?” I inquired with as little poise as I could manage.

“Wade deep and cast far,” he shouted over the drone of his outboard. Fortunately, he noticed my look of complete trepidation at that point, so he tossed his anchor back onto the rocks and offered a bit more advice.

“See that big boiler out there in the middle,” he pointed to an exposed rock the size of a Daihatsu that was dividing the flow into two raging currents, “the deke is just in front of it and behind it.” 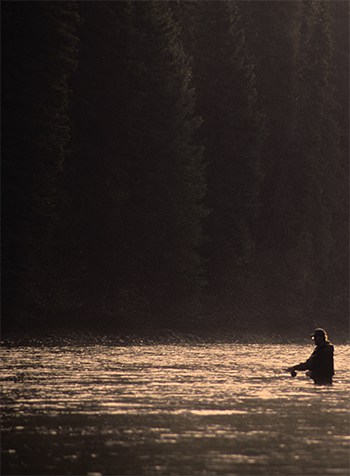 “It’s the sweet spot—the place where the steelhead like to hold,” he explained.

“Okay. No problem on that deke part—but can I try it from the other side of the river?

“There’s no room for a backcast here?”

He was crimping down the barb on a string-leech that looked like a trussed-up grackle; he paused and squinted from beneath his hat brim. “Can’t you roll cast?”

“I can roll cast a dry line, but not this plastic-coated bridge cable.”

Darcy casually reached for my rod and plunged out into the torrent to the upper limit of his waders. He then stripped off about sixty feet of line; looped it into five big coils, flipped the lead-core and the fly into the current, and skated it back to the top. With the tip pointing skyward, he paused briefly to load the rod and then with one seamless downstroke he fluently rolled and fired the entire line across the river.

“It’s all about timing,” he shrugged. “The less effort you put into it the better.”

The cast, itself, was remarkable. The fly landing perfectly on target and sweeping right through the deke was even more impressive. Most astonishing, though, was Darcy managing the entire gymnastic display without losing the inch-long ash that was dangling off the tip of his cigarette. Since I just stood there slack-jawed and silent, Darcy assumed that I had a full grasp of the concept so he hopped back in the boat and took off downriver.

Two hours later I was still standing in the same spot, but despite several hundred attempts to replicate Darcy’s roll cast, my fly hadn’t landed within a cannon shot of that quote/unquote deke.

When Darcy finally returned to check my progress, he found me halfway up the bank trying to tear down a spruce tree that had nabbed my fly. He killed his motor and sat watching me for a moment before making an intuitive assumption.

Sensing my exasperation, Darcy took me downriver to a nice little run with a long gravel bar and plenty of room for a backcast. There was a current seam at the head of the pool that even I could recognize, and there was one slack-jawed underachieving steelhead holding in the middle of it. We worked on my roll cast for a while after releasing the fish, and then we took a lunch break as the clouds lowered and a cold, steady rain moved in from the west.

“Ya like that run?” Darcy asked through a mouthful of soggy sandwich.

“Well that’s good,” he said as he packed away his lunchbox and yanked the starter rope on the outboard. “I’m glad we got your confidence up because you’re gonna spend the afternoon at a nice little spot called Roll Caster’s Hell.” 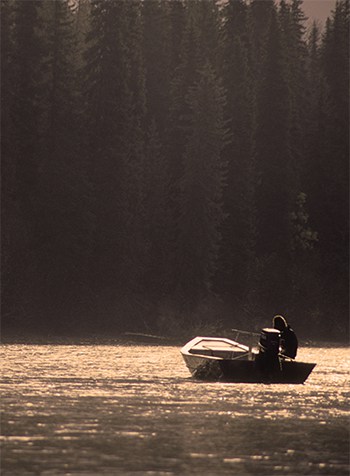 By the fourth day of our trip I had perfected something that behaved a bit like a roll cast, but according to the trained observers in my party, my version more closely resembled someone trying to hack vines out of a tree with a fly rod. I did manage a semi-respectable fish tally by week’s end, but more important than my number of actual steelhead hookups, I left the Babine with a whole hat full of new experiences.

In twenty-five years of fly-fishing, I had never before lived that moment of gasping, flailing panic when the current deftly removes your feet from the bottom and fills your carefully layered wader/garment ensemble with fortydegree water.

I had never gone through three dozen flies and thirty yards of leader material in a single week of fishing, nor had I ever lost both a fly line and a very pricey drag system to a single fish.

This game is not for the delicately wired sport that requires constant action as the measure of a good fishing trip. It’s a lonely and punishing grind; a meticulous regimen of cast, mend, swing it slow, step down . . . cast, mend, swing it slow, step down. If you don’t catch a fish on the first pass through a good run, change flies and go through it again. Lather, rinse, and repeat.

And don’t bother trying to re-focus after your mind has wandered and you can’t remember your last dozen casts. You won’t get a strike when you’re expecting one—especially after you’ve made a cast that you’re particularly proud of. If two fish on the Babine is a good day, and a six fish day is off the charts, then it doesn’t take a math scholar to deduce the average number of hours between bites.

Incidentally, I found that singing and humming can pass the time quite nicely between sporadic steelhead events— especially if you can come up with a snappy little ditty that’ll torment your subconscious for the entire week…

Sometimes the eventual strike is just a subtle tick at the bottom of your swing, or it might be a slow tightening of your line that feels no different from the dozens of rocks and logs you’ve been snagging. But then comes the big grab—the one that reminds you why you signed up for steelhead in the first place. A strike so savage that you finally understand why your guide keeps telling you to quit trout fishing and get rid of that loop of slack line before something bad happens. 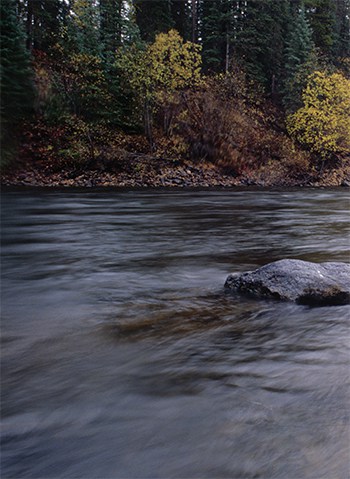 Even though this fish offers one of the greatest fl y rod challenges in fresh water, I am not a hopeless steelhead addict, nor will I ever become one. The best steelheading happens during the fall, and unfortunately so do many of my other rod and gun vices. Sure, I’ll go again someday; and when I do I’ll probably go back to the Babine. I’ve got too much invested in long underwear and bulletproof waders to go anywhere else, and fishing a more forgiving river would be like regressing to the bunny slopes after winning the giant slalom.

From a popularity perspective, one can only assume that the passing of seasons won’t be too much for a river as merciless as the Babine. She’s a long way from anywhere, and even if a new crowd of people put forth the effort every year, only a fraction of them will fall under her spell. Even if you love the Babine, she can still be a river you love to hate. But regardless of my return date, be it sooner or later, I have borrowed a small piece of the Babine experience that I’ll carry with me wherever I fish.

It might be that single impulsive bonefish on the edge of the pack that’s grubbing the bottom a little harder than the others, or maybe it’s the feeding, tailing permit instead of the indifferent cruiser. Perhaps it’s the fifth tarpon back in the string—the spontaneous follower—instead of the suspicious bell cow in the lead.

The time, the tools, and the place may be different, but the prerequisite for success will always be the same: as it was explained to me one frozen October morning on an indignant stretch of steelhead water, “you ain’t really fishing, unless you’re fishing that deke.”