A summer of musky-country pimpin'

AFTER GETTING WORD that I’d be next in line for the continuing Ride with Clyde saga, my fishing and social life took on a strange, A-list vibe. Clyde is a rock-star rig, and I suddenly became a kind of social agent for this over-forty hunk of Detroit steel.

For the next couple months, my usual routine as a musky flyfishing guide shifted to just being the guy who had the keys to this bad-ass, notorious automobile. My clients, my friends, and scads of randoms from all walks of life approached me not to satiate their musky cravings, but to bask in the sexy and dangerous aura of the 1974 Mercury with a rapidly disintegrating landau top. 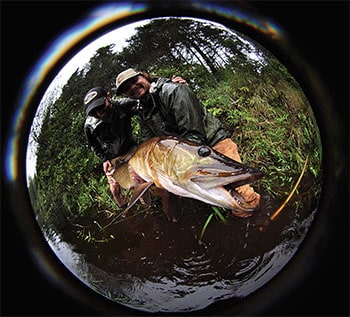 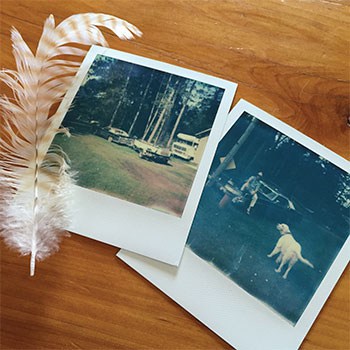 I entered some sort of space-time continuum upon picking up Clyde in early July. My guiding partner, Weston Thier, and his fishing dog, Blu, joined me for the road trip west to Sandstone, Minnesota, from my place on the Flambeau River in north central Wisconsin. (We got waylaid a bit on Madeline Island on our way over, but hey—in the throes of a Musky Country summer, detours and side-trips are part of the mission.)

During the briefest of safety briefings, before opening the door and entering the ultra-plush realm of cracked Naugahyde, I was advised to keep the oil and gas flowing. In addition, a man named Blumpkin, one of my Drakian message-board brothers, had previously piloted Clyde and had warned me to never pass by a gas station while piloting him. So I immediately found the nearest petrol stop and topped off Clyde’s ample tank.

A pattern immediately developed. For the rest of the summer and well past the peak colors of autumn, I was relegated to a rolling chaperone-slash-cultural narrator. In hindsight, it would have been easier and saved me a lot of breath to just have “It’s a 1974 Mercury” tattooed on my forehead. I had to budget an extra ten minutes into every fuel stop just to answer questions and take tourist pictures of curious admirers posing with Clyde.

Not that I’m complaining. Taking backseat to an icon has its benefits. For all the public curiosity I had to endure, I was also able to enjoy the quiet moments—floating through Flambeau State Forest on that sweet ’74 suspension; accelerating his huge-ass V8 until it pushed me back into Clyde’s couch-like front seat; smoking a rolled Spirit and catching my I-ate-thecanary grin in the rearview as I took Clyde to yet another musky speakeasy.

Yes, of course we fished. Batman had his Batmobile, and I had Clyde, for one precious season. I was honored, for one glorious quarter-turn of the blue marble, to lace up every morning and turn over the ignition on pure awesomeness. I was Musky Boss this season, and it was all because of Clyde.

The musky we chased appeared in almost stupid numbers at times. Weston and I had a ten-fish crescendo one hot August afternoon, when the dragonflies told us we were OK leaving fish to find fish. And the greatness continued until all of the leaves fell and the only color left in the forest was the blazing gold of tamarack needles. Clyde always rumbled that deep V8 approval whenever we returned smelling of musky slime. That oh-so-unique smell coupled with the ever-present aroma of disco ’70s—a permanent part of Clyde.

When I left him at the end of the season, I didn’t let myself get emotional. I just thanked him for allowing me to be one of the lucky ones—fortunate to take part in a few months of high-flying muskyhunting, like only Clyde can deliver.