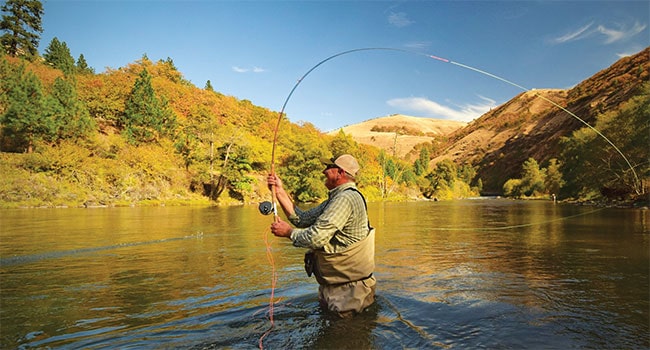 FOR MANY YEARS after I met Jeff Cottrell, I would have said that SoCal’s Bear Creek was the best small stream I’ve ever fished. A secretive tributary of the San Gabriel River not far from the troubled sprawl of the L.A. basin, it was the kind of place only fishing kids knew about. Nettles, rattlesnakes, tarantulas, scorpions, and despairingly steep canyon walls helped to ensure light traffic, and alder and willow overhanging the creek served as vexing deterrents to fly casters. A few miles upstream from the confluence with the West Fork, away from the mainstem and its deformed hatchery trout, you got into the good fishing.

It was rare to meet anybody up there—wild and lonesome enough that if you did run into another angler, it just seemed natural to stop and compare notes. I’d been camped for a couple days five miles upstream from the confluence and had it all to myself. There were lots of fish, mostly wild rainbows on small soft-hackles and wet flies. And though the memory of it isn’t as vivid as it once was, I remember it well enough.

I’m fishing downstream, on my way out. He’s working upstream, a tall kid, about my age. I note the seven-foot Fenwick he’s carrying. Lucky, I think. I’m fishing the one-piece, six-foot, four-weight I built from a noodle-y and nondescript glass blank I found in a discount bin. It’s not bad, perfect for Bear Creek. He greets me with a wave and a broad smile, openly delighted at meeting another flyfisher so far into the canyon. I stop and return the greeting. Tacitly, we sit down beside the creek. We both light cigarettes. 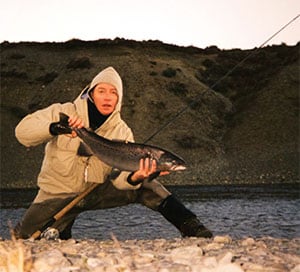 His name is Jeff Cottrell and he’s from Whittier, downstream from my home in Glendora at the base of the mountains. Like me, he is a regular on the San Gabriel, a Bear Creek backcountry camper. He likes my rod.

“Perfect for Bear Creek,” he says. Examining the fly at the end of my line, he adds, “You into Leisenring? I see the soft-hackle.”

I pull out my Perrine fly box, flip it open, and hand it to him. He scans the clips loaded with flymphs and wet flies and nods appreciatively. “Man, really nice. Bet you catch a lot of trout on those.”

I reply that I’ve been doing pretty well.

He takes out the box he’s keeping his big stonefly nymphs in, and opens it. Some of the nymphs are hackled fore and aft of the thorax, in the style of Charles Brooks, his recent hero. They are beautifully tied. “Hey, have you read Brooks? Nymph Fishing for Larger Trout?” I’ve been catching a lot of the bigger fish up here—sixteen, seventeen inches—using big nymphs.” He selects a couple flies and hands them to me, studies the contents of his box, then selects a third, one with a peacock-herl body. “Oh man… this one,” he says, handing it to me.

I give him a few of the soft-hackles in return—flies that have been working for me. That seems to please him. We share an enthusiasm for wet-fly design. Turns out, we are zealots for the cause and soon we are both talking at the same time, the fly talk punctuated with gesticulating tales of our angling prowess meant to illustrate and emphasize the killing effectiveness of favorite patterns. He reads a lot and fishes a lot. Says he caught a steelhead out of Sespe Creek. We smoke a deuce of cigs apiece before finally packing it up. We shake hands, wish each other luck, then he goes his way and I go mine, and we don’t meet again for forty years.

I bought a copy of Nymph Fishing for Larger Trout and found it one of the most useful and influential books on flyfishing for trout I’d ever read. I still have that copy on my bookshelf, a reminder of that meeting in the sun-flecked shade of Bear Creek canyon. A compatriot met in a lonesome place had given me the product of his art and pointed the way to knowledge that would change my game—a game Jeff Cottrell played so well that it became his occupation, as it eventually became mine.

A lot passes in forty years. Families built and kids raised; lifetimes lived; friends that went down paths in twisting, seemingly random directions. Yet I suspect there’s really no such thing as randomness or coincidence. There seems to be a purpose to it all, though I can’t for sure say what that is.

I’ve been living beside the upper Columbia since the early ’70s, having moved there not long after meeting Jeff. He started guiding in California, on the private water section of the Owens River that flows through Arcularius Ranch, then moved on to a long stint in Colorado where he met his wife, Jan. That led to a long tour out of the country, guiding on the Rio Grande in Tierra del Fuego. Wanting to eventually retire from guiding and make a home in the Northwest, Jeff and Jan made a go at owning a fly shop in The Dalles, Oregon. But traffic was light there to begin with, and then the economy tanked. 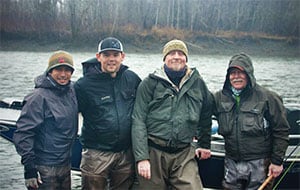 CAN YOU GUESS WHO’S THE HUGGER?

When I finally meet Jeff again, it’s at another secretive place, on a much larger river, far from southern California. He’s managing Black Bear Lodge on the Upper Columbia for Jennifer and Jack Mitchell of The Evening Hatch fly shop in Central Washington.

The lodge is just downriver from my own fish camp, and though the Evening Hatch crew might be considered my competition, there are no guide wars on the upper Columbia. Those of us operating there are friends. The Black Bear’s clients have left, and the crew—CJ Emerson, Rial Blaine, and Jeff— are catching their breaths, waiting for the next round. I show up. Jeff pours me a cup of coffee. And we’re all sitting around the lodge’s big dining table. It’s October caddis season and we’ve been working up new patterns. Our fly boxes are open on the table and we’re comparing notes on designs. Even though he knows more than any of us on the subject, Jeff is doing the least talking. He’s listening, pulling flies from his steelhead box and stacking them into a pile on the table.

He is old school. I’ve heard that said about Jeff, and his flies might create that impression. But that description serves only as a shallow generalization. It’s not who Jeff Cottrell really is. It would be more precise to say he is well-schooled. He knows that “tradition” is the archive of what worked. Like a lot of guides, he is a closet intellectual. A “man of the country,” Jeff’s politics are all over the map—an independent stripe fairly ubiquitous in the Pacific Northwest. Jesse Ventura comes to mind, for lack of a more cheerful comparison. He’s fine sparring if invited to do so. And if you spar with him you’ll see the intellectual emerge. Agree with him or not, his arguments are well-informed. An unshakeable gentleman, Jeff never gets hot and doesn’t take it personal if you disagree with him. And though he lives immersed in angling there is nothing of the know-it-all fly shop pro about him. He is no self-promoter. Jeff is having fun, and that is magnetic.

The writer Scott Sadil once told me that even the most hard-assed ranchers will give Jeff permission to fish on their property. “Jeff’s the guy to send in,” Scott says. Women like him too. Both of the girls on my crew lined up to hug him goodbye after first meeting him, a gesture they reserve for only dearest friends. He is confident, engaging, and light with them—they like that. Jan, his wife and partner forever (also a hugger), knows him better than anybody, and she might tell you he is a stick-and-stay family man. Jeff is not well known in the way that some archiving the life and times of our sport in front of a screen are known. He is known as an angler practicing at a level where phony and inauthentic does not pay off. He is well known for that.

Jeff and I like traditional elements, natural materials, and soft-hackle flies. The guide Rial tends toward synthetics, rubber legs— a “modern” approach. Young CJ, guiding since high school, fiercely loyal to Jeff, his mentor, gives Rial some shit about rubber. Jeff, having assembled a generous pyramid of steelhead flies, pushes them over to me, and then smiles and nods, a signal to take them. They are beautifully tied. One with real jungle cock tied down-eye style. I recognize a couple ancient patterns, including an exquisite Lady Caroline. But most are his own designs, reflecting his knowledge of Old World styles, yet, decidedly “West Coast.” In them I see the influence of Trey Combs, Jeff’s close friend. Jeff gives stuff away. He moves things toward you, those things he knows you like or need. I thank him for the flies, wanting to pass him my whole box to reciprocate. He’s got a day to kill, so I invite him to fish my secret lake instead.

The small lake is a perfect circle. Some say a meteor created it. It spans the meadowlands of a narrow creek valley, mountains on both sides framing a blue delta of long autumn sky. All is mirrored on the calm surface. Cattail reeds line the shore and the water quickly drops off from there. We are in my jon boat casting sink-tips toward the reeds. We have it all to ourselves.

Every so often I give the oars a pull. The conversation is an easy back and forth while we chain-smoke and fish. The fish are wild redband rainbows with some shoulders on them, and every time Jeff’s rod bends into one of them his face opens to a smile. He enjoys every trout, marveling at the purplish-blue coloration the lake gives them. And he seems to enjoy the ones I catch even more. He is the best kind of fishing companion, still the adventurous kid I met up Bear Creek canyon, long ago.

He remembers. We recall that meeting. Jeff shakes his head and laughs, “We’ve come a long way, haven’t we, Steve?” He means it as an affirmation, not a question.

I entertain some thoughts about those born to be fishers, for who it is not a sport but a living and a way. I pull on the oars as Jeff lays out another beautiful cast.