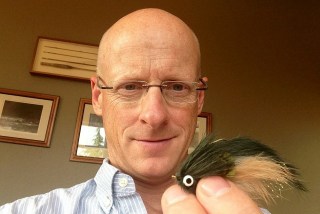 Ken Morrish spent two months staring at a grasshopper he’d pinned to a block of wood. He alternated holding first the real thing and then his fly pattern against the light. His decision: The only way to duplicate a hopper’s unusual shape was with foam.

“I backed into the fly,” said the 47-year-old trip planner, angler and photographer from Ashland, Oregon. “It was shape first and choose the materials second. Fortunately my hoppers have turned into my best sellers and supplied me a good identity.”

Around our household the popularity of tan, green, pink, yellow and black Morrish Hoppers in sizes 6-14 is soaring. My wife, Jean, raves about Ken’s hoppers for both her personal and guided fishing. Several years ago she couldn’t wait to introduce this hopper revelation to me.

Some of my notable fly discoveries, much like Jean’s, come from prowling many fly bins. On-the-water results are far more important to a “professional fly buyer” such as myself than suffering lackluster creations from great self-promoters.

Discovery in a bin

Around 2001 the handful of lustrous size 12 green nymphs with black bead heads from an old High Country Flies bin was my introduction to the talented inner workings of the Morrish mind. In our Snake River system, prevalent Hydropsychidae caddis make excellent producers of green nymph patterns such as a Zug Bug, Prince and Peeking Caddis. Everywhere I plopped one of Ken’s green Dirty Bird nymphs, something with spots was in an eating mood.

Shortly thereafter, longtime fishing pal and talented fly tyer Joe Burke, suggested I try one of the “new brown sculpin patterns named for some guy.” Soon Morrish Sculpins in olive, spinach (dark olive) and brown proved advantageous for late fall browns, cutthroat and rainbows on local and Idaho portions of the Snake and for lake trout as well.

My support of the pale belly, dark back Moorish Sculpin has been continuous but minor compared with the enthusiasm it gets from vocal local wild trout defender and lake trout hunter Peter Moyer. In recent years he has triumphantly amped his sinking line skulduggery from once puny intermediate-tip lines to 525-grain behemoths that drag his navy of brown and olive Morrish Sculpins to depths beyond the view of his kick boat’s sonar system. Imagine when Peter discovers Ken’s latest black-and-white streamer — said to be in Umpqua’s future pattern department.

The mention of Umpqua Feather Merchants requires a Morrish history update. If there were fly-tying child prodigies like in music, Morrish was Juilliard quality at age 12. A product of the Diablo Valley Flyfishers club youth program, he had additional motivation from Andy Puyans, whose Creative Sports Enterprises was considered one of West Coast fly tying’s holy grails.

“We were little fly tying mercenaries, locked in rooms at West Yellowstone (Federation of Fly Fishers Conclave headquarters) and told to produce.”

Morrish’s father and grandfather were well-known Nor-Cal fly anglers, and his attendance at Lewis and Clark during college years forced him to become involved with anadromous fishing. Obviously this led to a life of guiding, fly fishing retail and continuous lonesome travels involving coastal streams of Oregon, Washington, Alaska and British Columbia.

Years of writing outdoor columns and magazine pieces has brought me in contact with a wide range of anglers, hunters, outdoorsmen and talented fly tyers. Morrish ranks with the thoroughly unique ones due to his many abilities, or perhaps quirks.

For instance, in attempting to track down the mercurial madman behind the Dirty Bird and the Morrish Sculpin, I began stumbling over stunning wildlife and fishing photos by Ken Morrish. Lo and behold, the guy, along with his partner Brian Gies, owns Flywater Travel in Ashland, Oregon. While running down giant B.C. steelhead, Bolivian golden dorado or massive Russian Atlantic salmon, Morrish finds time to click off a few breathtakers before swimming for his life. He’s a self-taught photographer who doesn’t have time to pursue the job except occasionally.

Insiders report his fly tying addiction became such a problem that in order to preserve domestic tranquility, the operation took a forced exit to a backyard cabin Ken straightens only when he can’t find his tying vise.

“People don’t buy it like I think they should,” Ken lamented during our recent several-hour conversation. “Were I to have one fly to fish for trout forever, that’s what it would be,” he said.

My Dirty Bird experience tends to agree with Ken’s pattern assessment. But from September on, a brown or spinach sculpin might complicate the choice.

Fortunately when Idylwilde went under (Morrish flies are still visible on the website), Umpqua Feather Merchants bought the Idylwilde facility. Happily they added Morrish to their expert staff, and he didn’t have to re-create pattern information or tying instructions, which he says he couldn’t have found time to do.

“Trout tying is the contact fly market,” Ken said. That puts his lifetime dedication to anadromous fishing at a slight disadvantage. “You really don’t see many fishing for steelhead with hoppers,” he said.

But because Morrish can get to so many fishing destinations through Flywater Travel, before each expedition he devotes thought to engineering a new fly with great fishability.

An inveterate wader, the man never has owned a boat.

“I’d rather hike, watch and bushwhack, and I know that I still fish too fast,” he said.

“The physical challenge of landing big fish on very light tackle is where my joy of fishing originates.” That’s how he came up with the newly popular Morrish Mouse.

“I get to go on great trips,” he said. “I heard that on the Kamchatka Peninsula in far eastern Russia, the big rainbows love mice. Most mouse flies are cute but not practical to fish for a very long. Mine is a threestep fly with a back, a tail and a big profile of minimal mass that swims forever and can be cast on a light rod (5-weight).”

Morrish and Gies opened Flywater Travel in 1999. They offer clients more than 150 destinations, but as one might expect, Morrish specializes in British Columbia and other challenging sea-run fishing locations as well as South America, Mexico, Russia and the South Pacific for bonefish.

As with his flies, Morrish also undersells travel. Providing the proper service is more important to their 10 employees than making a commission.

Ken visited the Jackson One Fly event two years ago. This week he has other commitments. I’d hoped to see him again, but until then I’ll be satisfied pitching his flies and waiting for Umpqua to get the black and white sculpin to a fly bin nearby.