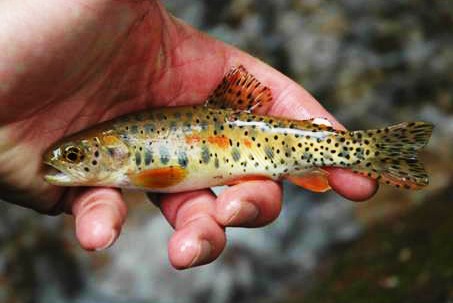 The story of Colorado’s official state fish, the greenback cutthroat, would make one hell of an episode of CSI Trout. As it turns out, about half of the fish that scientists had been calling greenbacks actually have genes more similar to the Colorado Cutthroat subspecies.

The discovery was the work of Jessica Metcalf, a young researcher from the University of Colorado, who used DNA testing and tissue samples from the 1850s to identify the genetic fingerprint of “purebred” greenbacks. About two years ago, Metcalf’s findings ignited an international “Trout-Gate” within the scientific community. Up until that point, greenback cutthroat recovery had been considered a hallmark achievement. The species was thought to be extinct in 1937. But biologists were boasting the existence of 20 self-sustaining populations in the state, and those fish were about to be removed from the Endangered Species Act.

Metcalf’s research, however, blew that science out of the water: It proved that greenbacks existed in only one small stream—Bear Creek, a tributary of the Arkansas River—and that the population was less than 1,000. I recently caught up with Metcalf and Kevin Rogers, head Aquatic Researcher for Colorado Parks and Wildlife. Both are currently working on projects to repopulate Colorado’s true state fish. Here’s what they had to say.

Help me sort out the confusion between Greenback cutthroat, and what you’re actually stocking here today at Zimmerman Lake, the Bear Creek cutthroat, right?

Right, that’s kind of the challenge. We thought historically that we had three subspecies of cutthroat trout in the state. We had greenbacks on the east side, Colorado River cutthroat on the west, and Rio Grande cutthroat in the San Luis Valley on down into New Mexico. But Jessica showed with her work that we have actually six different lineages.

One of those is the yellow fin cutthroat that’s thought to be endemic to Twin Lakes. It grew up to 10 pounds—an awesome fish! It was discovered in 1885, but it was basically pronounced extinct in 1903.

But on the Front Range, Jessica found that these fish in the South Platte Basin were in fact like the Bear Creek cutthroats. So the fish we thought were greenbacks actually were not. They were fish stocked from the Western Slope, from either Trappers Lake or Grand Mesa. 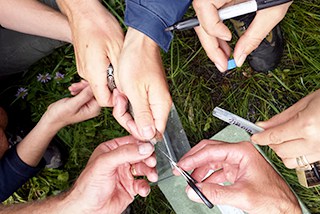 So these fish in Bear Creek are thought to be the only cutthroat trout native to the East Slope, so technically they’re Colorado’s state fish—the last remaining greenbacks?

How large does the Bear Creek cutthroat get?

They only get about 10 to 12 inches long in Bear Creek, but I suspect they will get larger in Zimmerman. Most of our native cutts live 6 to 10 years, but that fact is, we just don’t have much experience yet with the Bear Creek fish. I guess we’ll find out.

And they’re dangerously close to extinction? 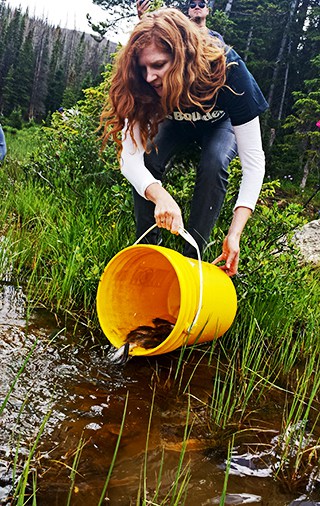 Yes, there’s only one population, and there are only about 800 individuals in the wild. Obviously we’re concerned about replicating that population so we can preserve that diversity for future generations.

So now we’ve taken spawn from the wild and brought that into our hatchery system. The eggs are split into two locations, our Poudre River hatchery and also down at the National Fish Hatchery in Leadville. We divide them up so that if something bad happens, we don’t have all of our eggs in one basket.

[Troy Hawks is a public relations, communications, and content consultant with clients that include Colorado Ski Country USA, Snowsports Industries America, National Ski Patrol, Learn to Ski and Snowboard Month, and Ski Nation. He writes freelance articles from his home in Denver, Colorado. Follow him on Twitter via @HawksSquawk]