Have 9 Weight, Will (Must) Travel 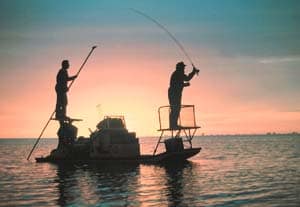 The second cartop-to-windshield avalanche at a stop sign is a strong signal: Ditch Jackson winter for somewhere that mosquitoes, sunscreen and T-shirts outnumber gloves, parkas and plug-in car heaters. Evacuation by car is the answer. Unfortunately my ol’ gear room isn’t primed for fast winter getaways. I figure at least two “rigging days” before departure. Let’s see what the fly rod corner portends. Ahhh, here’s what I’m looking for, a nice, powerful 9 weight. Graphite? Naturally. Nine-feet? Of course. I’ll just wind a fresh intermediate line on a spare spool, throw in a weight forward floater and a 200-grain Teeny fast sinking head and I’m ready for anything.

Hmmmm…..what’s this battered blue tube? Haven’t tooked at this rod in ages. Thing must be 30 years old, and it still feels good. Scientific Anglers doesn’t even make fly rods anymore. Wow I’d forgotten about this ancient fiberglass System 9. First quality “big rod” I ever owned. Yep, just got out of the Air Force in ’69 and was back editing newspapers in South Florida. Lunched weekly with Lefty Kreh when he managed the Miami Herald’s Metropolitan fishing Tournament. He sent me over to Lee Cuddy Distributing to get a 9 weight. Not many places peddled better fly rods in Miami back then. Might have cost $55 or $60.

Some great stories go with this rod. Yeah, I remember “testing” it down on Old Cutler Road, south of the sprawling condo developments and million dollar mansions of Kendali/South Miami. Used to be extensive vacant mangrove tracts, criss-crossed with tiny brackish water canals. Baby tarpon liaed in those ditches. John Emory at Cuddy’s gave me some small pink, white and brown polar bear hair flies that were great canal patterns. Watch for a tarpon to make a roll, cast beyond it, let the fly sink for a minute, and begin slow strips. Pow!

Sometimes more than one of those three to 10-pound fish would blast the fly. I missed a lot of’em when l’d snatch the fly away with a big rod-tip hook set. Didn’t matter. It was great action. Mosquitoes were the only problem. They were terrible…wore a rain jacket, smoked Hav-A-Tampa Jewel cigars and fished in Levis and a pair of cutoff garden gloves. The few friends I took on these afternoon tarpon hunts ended up diving into the car after ten minutes. The bugs drove ’em crazy. After a while I just went alone.

In those days several giant real estate companies based in Canada and Miami were developing Bahamian vacation/real estate properties. They constantly invited our paper to publicize their schemes. Great places to pack the ol’ 9 weight. Best Bahama bonefishing I ever had was in the Joulter’s off Andros. Get this. Of all things they used airboats from the Everglades! Aluminum airboats in open water are dangerous as hell. If the wind was blowing we took a beating crossing channels and choppy bays. But once we made it to those sugary sand flats, we could go anywhere!

Mosquitoes were the only problem. …wore a rain jacket, smoked Hav-A-Tampa Jewel cigars and fished in Levis and a pair of cutoff garden gloves.

They’d anchor the airboats on a flat, and l’d start walking after pods of tailing fish or find channels where schools were mudding. I had a great time while the guides were still netting little crabs to bait the other guy’s spinning rods. Fly rods weren’t very popular in the Bahamas yet and most af the guides didn’t recognize their potential. My sparse collection of home tied bucktails, Pink Shrimp, Frankie Belles and Lee Cuddy Bonefish flies (now the Chico Bonefish Special) did pretty well. Crazy Charlies weren’t around yet. My 9 weight saw a lot of Andros, Bimini and Great Harbour Key.

Around 1970 a guy named Jack Allen really helped out my fly fishing. He grew up with Dave Whitlock in Bartlesville, Oklahoma, and hed fly fished from Maine and Canada through the Carolinas and Florida to Cuba and the Bahamas. Jack lived in Ft. Lauderdale and spent every waking moment fly fishing and bass guiding in the Everglades.

Hanging around Miami Beach where the newspaper drove me nuts. So I spent time out in the swamp, too. Jack was my only friend who really understood largemouth. Even as a kid growing up in South Florida l’d always loved bass. Except for the airboaters, who didn’t fish much, nobody else was around. The bass fishing boom was beginning nationwide but it hadn’t taken off in South Florida yet. Too much saltwater action. The 3 weight was great in the ‘Glades.

The sawgrass prairies af the Everglades emerge 20 miles west of downtown Miami on Calle Ocho (S.W. 8th St.). Roadside canals resulted as “walking cranes” dug and filled this venerable connector between Tampa and Miami. Officially this is U.S. 41, but it’s better known as the Tamiami Trail. The Trail’s canals also intersect with numerous drainage canals dug between levies running north snd south. A 12-foot Ouachita aluminum john boat, Evinrude 9 1/’2 and a tiny trailer became my ‘Glades transportation. I launched wherever enough water existed for either the oars or the Evinrude to work. At canal ends, I’d unfasten the motor, drag it and the boat over the gravel levy, slide down the other side and keep going. Outside the canals in the actual swamp, I’d wade along and tow the boat on a line around my waist. There was fishing galore.