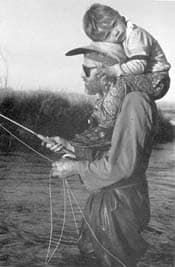 The second time I met R. L. Winston’s Bamboo Guru, Glenn Brackett, he was in the Twin Bridges Post Office. It was my first week in town and I was hot to get a few letters off with the new postmark. I walked in past Glenn and a couple of ranchers who were leaning up against the window in the small lobby, and stood behind a woman who was trying to ship a vacuum. Hoping Glenn would recognize me, I turned around and said, “Hey.”

“How you doing,” he said, then added, almost as an aside, “we usually form the line back here, so as not to crowd our Postmistress.”

Recently I caught up with Glenn at the old Winston factory where his rod shop is located, and asked him about this meeting of ours.

“Well,” he said, “it tells you a lot about Twin Bridges, doesn’t it?” Twin Bridges, MT, population 350 or so has been home to the R.L. Winston Rod Co. for 25 years, since Brackett and then co-owner Tom Morgan moved the company from its Market Street store in San Francisco. For more than century before Winston arrived, Twin served as a resting place for ranchers and gold prospectors, hardened men and women on the heals of Lewis and Clark and Sacagewea. Before the upstream exploration, the Shoshone Indians lived and hunted in the Beaverhead Valley; since the first snow melted in the Red Rocks and the Pioneers, the valley has been the place where the Beaverhead and Big Hole Rivers join, where the Jefferson River begins.

As a rod builder, fisherman, and father, Glenn Brackett has the steadiness of Twin Bridges; quietly impassioned, Brackett has gone about the business of making some of the finest split-cane rods in the world for over 20 years. He’s also fished the world-over twice, holds numerous world records, and yet seems truly content to hike high into the Tobacco Roots and pop a dry fly onto bathtub-sized pools all day. And, though he has no biological children, Brackett has been in the “business of parenting” since his mid-thirties when he began adopting “troubled” children.